NVIDIA's upcoming RTX 3080 Ti flagship has been spotted in an HP driver courtesy of StefanG3D (via Videocardz). According to the source, RTX  3080 Ti is the final name for the GA102 based 20GB graphics card that NVIDIA is preparing to take out the big Navi lineup.

According to T4CFantasy to whom we reached out, those names are 99% correct. He is sure that 2205 ID belongs to the RTX 3080 Ti because he had already seen traces of this new SKU through the software that he wouldn’t name.

The exact GPU ID can be seen below: 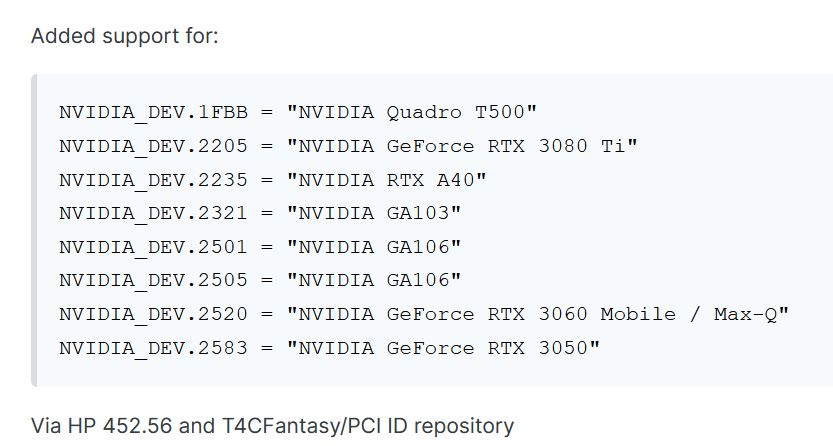 The NVIDIA RTX 3080 Ti  was originally supposed to be based on the PG132 SKU20 (although NVIDIA decided to rename it) and has been in the pipeline for quite some time. While the exact CUDA core count is not yet confirmed, it will have twice the amount of memory when compared to the vanilla RTX 3080. To be clear, even the nomenclature is not confirmed as the SUPER suffix could appear anywhere in the name should Jensen deem it so.
We highly recommend users (that want to buy an NVIDIA card) to go for the RTX 3090 (if they can afford it) or wait for the RTX 3080 Ti/SUPER 20 GB.

With this amount of shading power, you will want to have a complimentary memory buffer. According to Videocardz, the card will be landing in January 2021. Considering the fact that killer apps like Microsoft Flight Simulator 2020 already chomp away all the vRAM the 2080 Ti had to offer, 10 GB is going to feel tiny after a year or two. Next-gen consoles are already driving games with asset-streaming of large worlds, so vRAM is going to start becoming a lot more crucial than before. With AMD rocking a flagship card with 16GB of vRAM, NVIDIA had to reply with their own high vRAM card.