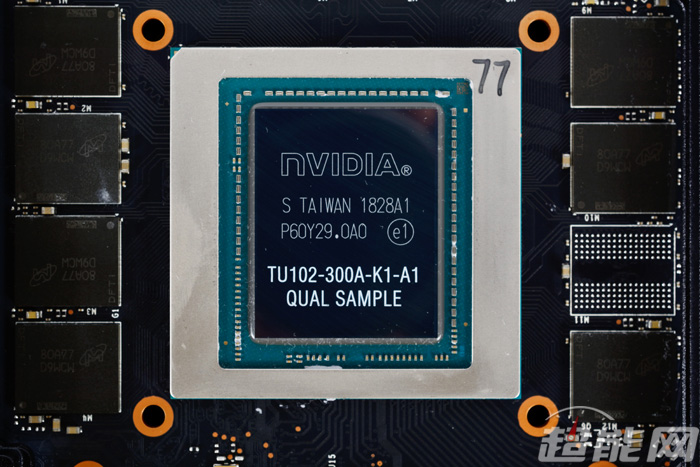 The NVIDIA GeForce RTX 2080 Ti flagship has launched and we are getting a first good look at the massive Turing GPU which will be powering the graphics card. We have known details of the Turing GPU since the Quadro RTX launch but this is our first look at the chip itself which powers it all and it's an engineering marvel.

We know that NVIDIA's Turing GPUs are based on the 12nm FFN process node, that's TSMC FinFET NVIDIA for short. While we already got our first look at the Turing TU104 GPU in the breakdown we posted here, the Turing TU102 GPU was only shown in renders and GPU die diagrams. Now that it is officially exposed by Expreview, there are some key things we have to talk about.

First of all, all NVIDIA Turing TU104 GPUs based on the 12nm node are manufactured in Taiwan. The Turing TU102 GPUs, on the other hand, are manufactured in Taiwan and Korea. It is possible that NVIDIA is using all of the available 12nm fabs to ensure stable capacity as the RTX 2080 Ti is a high volume product. The Korean one may possibly be Samsung but we have not confirmed that yet.

In similar fashion, NVIDIA used Samsung's 14nm FinFET process to produce entry-level Pascal GPUs while the rest of the lineup was manufactured on TSMC's 16nm FinFET node. The entry-level cards based on the Samsung node still used the Taiwan name on the die instead of Korea so that's another thing to be noted here. The key takeaway here is that TSMC and Samsung 12nm nodes are not the same so performance and power consumption will end up being slightly different on the 2 chips but since there are no drivers available for the cards yet, there's no way of knowing what we might end up with.

Don’t forget to comment which GeForce 20 series cards you are going to purchase for your PC in the poll below.