NVIDIA has announced their latest GeForce GTX VR Ready program which aims to usher in a new ear of the emerging virtual reality market. The GeForce GTX VR Ready initiative ensures and designates VR ready PCs, Notebooks and Graphics Cards from a wide list of NVIDIA AICs (Add-In-Card) and system builder partners that are configured to deliver an optimal VR experience to end users.

All major graphics vendors are eyeing Virtual Reality to be a game changer in the industry. NVIDIA has already launched GameWorks VR and DesignWorks VR technologies that will ensure best possible experiences on the GeForce powered gaming PCs. With the new GeForce GTX VR Ready program, NVIDIA ensures that all of their products and those from their partners are ready for VR gaming. To make this possible, GeForce GTX VR Ready will designate from a list of PCs, Notebooks and graphics cards, featuring NVIDIA hardware and determine that if they are ready for Virtual Ready gaming. All products that meet NVIDIA's standards to run Virtual Reality will be assigned a "GeForce GTX VR Ready" badge on either the system itself or the graphics cards.

Among the list of supported hardware are the Maxwell graphics cards which include the GeForce GTX 970, GTX 980, GTX 980 Ti and Titan X for desktop PCs while the GeForce GTX 980 (Mobility) is the only GPU that can run Virtual Reality on notebooks. Other requirements to run VR include a processor equivalent to a Core i5-4590 or greater, 8 GB RAM (minimum), Windows 7 SP1 (or newer) and 2x USB 3.0 along with HDMI 1.3 outputs. These are the minimum requirements that NVIDIA wants DIY builders to have when building a PC geared for Virtual Reality experiences. 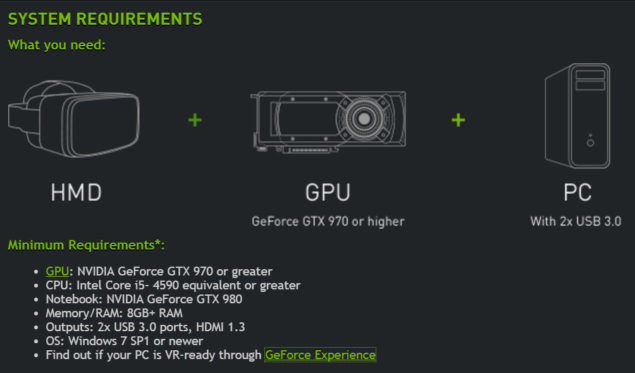 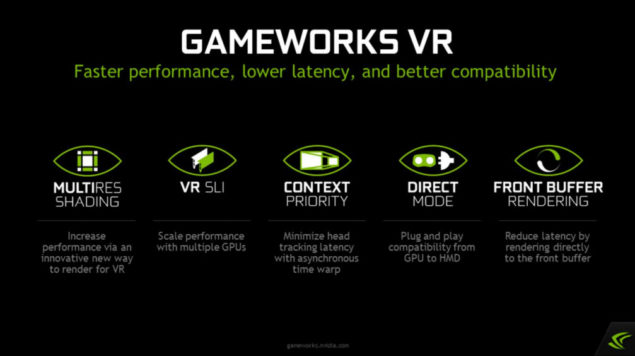 A total of 57 partners are on board with NVIDIA to ensure that VR ready PCs are delivered to gamers and users. It can be seen why NVIDIA is putting so much effort to ensure that VR offers the best experience on GeForce PC as they consider it more than just an experience, for them, its an entire ecosystem based around powerful GPU hardware (Maxwell/Pascal), swift and precise software (GameWorks VR/DesignWorks VR) and last but not least , the VR headsets themselves which need to be geared to deliver responsive and lag free output to users. All of this combined will help NVIDIA achieve a much wider goal which is to ensure that VR gets adopted at large scale and more users get on board to enjoy the new experiences which will be gaining momentum in 2016.

Out of all the PCs in the world (~1.3-1.5 Billion), there are only 13 million PCs that can actually run VR right now. In 2016 and beyond that, NVIDIA believes that number is expected to rise with influx of gamers towards PCs that will be faster, efficient and offer great software solutions to developers to help tune their AAA titles on the PC platform.