NVIDIA might have had a great 2015 in terms of graphics business, but things are going to get heated as the company enters 2016 which will be the year of VR and DirectX 12 gaming. While talking to Venture Beat, the general manager of NVIDIA's Shield, Gaming and VR Business, Jason Paul, revealed some interesting points regarding VR Gaming which we will see a lot more in action, starting 2016. 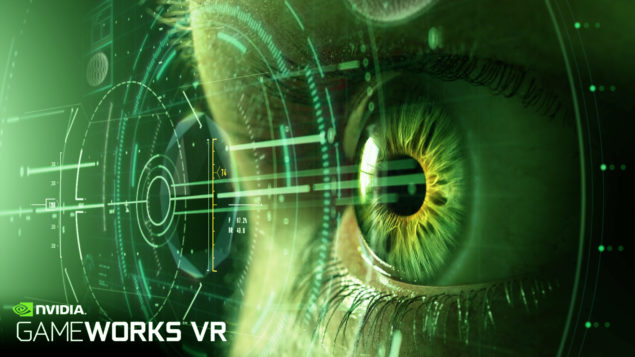 According to Jason, out of the entire PC installed base, there are just about 13 million PCs in the market that are able to run VR perfectly. These PCs feature high-end cards from NVIDIA and AMD (GTX 970s and R9 290s or greater). That number might look good but when we look at the audience over Sony's PlayStation 4 game console that is around 30 million and all consoles are certified to run with the PlayStation VR headset, there seems to be quite a difference with twice the users than the PC platform. While PS4 may not be able to run VR with the same visual fidelity as PC, it will provide users the experience at much lower prices. The user on PC platform will end up with significant details and image quality, although at a higher cost. But PC games have always been the pinnacle of graphics showcase and VR will not only run great on the PC, but also look great.

NVIDIA is hard at work on optimizing VR for their graphics chips. They are aware that you need a lot of horse power to run VR games. For instance, we have a typical gaming scenario where 1080P and 30 FPS are a base line for 90% of PC gamers. PCs today are powerful enough to run games at the said resolution and framerate and even cards like the GTX 950 can do much better at that resolution in a range of titles. However, if we want VR into consideration, that scenario requires a 2K (minimum) screen that has a resolution of 1440P but renders close to 3K resolution (1620P) and frame rates shouldn't dip below 90 FPS. VR Gaming requires that extra performance that's a 7 times increase over traditional gaming and you need to render screens really fast so there's minimum amount of lag when a person moves his head to display the image in front of him, viewing the headset. 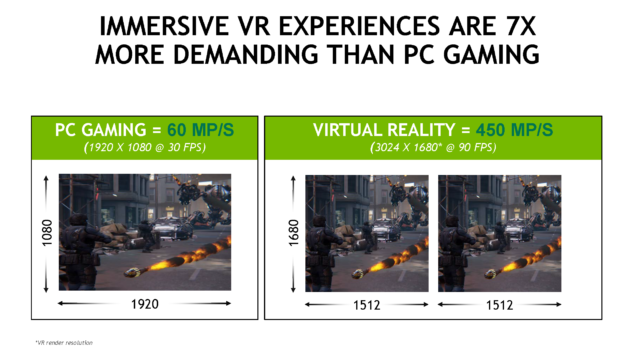 In his conversation, Jason revealed that NVIDIA in contact with over 600 companies working on VR projects and that number is likely to increase. There are around two thousand startups and companies working over on VR right now and having 600 of those as partners is a major deal. This shows just how serious NVIDIA is taking VR right now as it will be one of the most major drivers for high-end and enthusiast based graphics cards. In the future, NVIDIA believes that VR  would be more than just a platform for gamers, it will be one of the enabling technologies that offer a totally new way of social interaction among people.

Right now, the focus is at gaming so we will talk about the other experiences in the future as more stuff is developed for the general audience. We know NVIDIA's Maxwell GPU have a big market share, their GTX 970 is still one of the best selling graphics cards, even the more expensive GTX 980 Ti bagged a large user base for itself. Maxwell has had a particularly good year and we know that it already has support for VR gaming and DirectX 12. It doesn't stops at Maxwell for NVIDIA, next week we will see new virtual reality experiences being shown at CES 2016. NVIDIA will be powering a lot of those demos and we might hear some words from them on their next generation Pascal GPUs which is also fully geared for gamers and professional audiences. 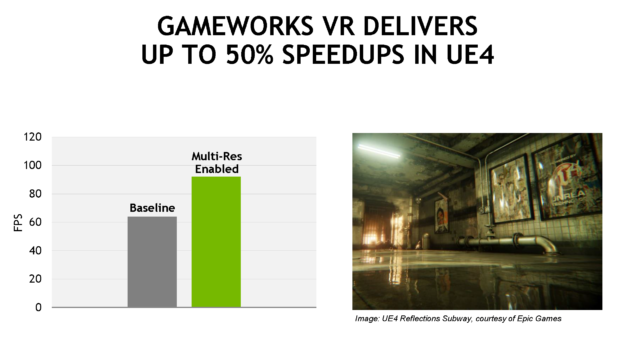 Jason Paul @ NVIDIA: Nvidia is doing three core things to solve this problem. First, we’re building fast GPUs, and we’re building them specifically architected for VR. Our Maxwell architecture has specific capabilities and features that make it very fast for VR. We have some technology that increases performance by up to 50 percent for VR applications.

Software-wise we’re making sure the out-of-box experience for customers is perfect. We want the first VR experience everyone gets when the headsets come out to be a good one – no stutter, no lag. Our GeForce Experience software and our Game Ready drivers are core to making sure that experience is delivered.

We’re working with all of the VR ecosystem through an SDK we call Gameworks VR on the consumer side and Designworks VR on the professional side. That helps headset manufacturers get lower latency and plug-and-play compatibility, and it helps developers get better performance out of their apps. via VentureBeat

NVIDIA says that the PC platform's installed user base for VR will continue to expand and as more games get GameWorks VR support, they added performance boost of up to 50% would mean that more and more PCs will be meeting the baseline of what's required to run VR Gaming adequately. This will not only be achieved on PCs using current and next generation hardware, but PCs of all sort of will leverage from this such as note books. Following are some features offered by GamesWorks VR:

In one of the questions that was asked, Jason revealed an interesting piece of information. We have known that NVIDIA controls a huge market share of graphics cards on the PC platform. According to Jason Paul, the number is much bigger than we thought of previously.

Paul: The PC market sets a higher bar in terms of performance and quality level. The resolution is higher. The frame rate is higher. And the installed base will catch up pretty quickly.

GamesBeat: Are you guys assuming a certain number of brand new sales to get to those 13 million and 25 million numbers (the number of PCs capable of running immersive VR)?

Paul: This is normal PC business. I expect VR will help accelerate growth in the high end of the market.

GamesBeat: Is that Nvidia only or is that the whole market?

Paul: This is Nvidia. But in this space Nvidia has 85 to 90 percent market share. It’s close to the whole market. What do you think about VR adoption? via Venture Beat

It's surprising that NVIDIA controls that big of a market right now and its necessary for them being this big to drive VR for the gaming market, offering better performance and experiences to the consumer. While AMD controls a fraction of the market share that stands around 15-20%, CEO of NVIDIA, Jen-Hsun Huang, already stated that they still see AMD as a strong competition. More true words cannot be spoken, AMD has been doing a really good job keeping up with NVIDIA and even surpassing them in some technologies. Not only is this competition healthy for consumers, but NVIDIA believes that its good to have the competition running as it ends up in the better interest for all in the market.

“[AMD has] been a strong competitor for as long as I can remember, and they remain a strong competitor,” said Jen-Hsun Huang, chief executive officer of Nvidia, at the company’s conference call with investors and financial analysts. “It is just that our strategy is very different now. We used to be much more of a component supplier, competing directly with other component suppliers, but increasingly, we are really a differentiated platform supplier. The software investments that we have made over the years really, really increasingly define our product.” - CEO of NVIDIA, Jen-Hsun Huang via Kitguru

AMD has their own solution for VR known as LiquidVR which offers its own range of features. Such big is VR for graphics companies that AMD delayed their most powerful GPU, the Radeon R9 Fury X2, to align with VR market. We will see an update on VR and a lot of demos at CES 2016 in just a few days from NVIDIA and AMD.