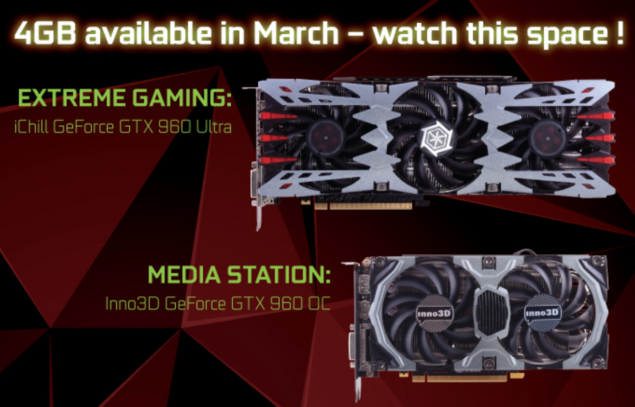 The news comes straight from Computerbase who managed to get a shot at Inno3D's latest presentation on their iChill graphics cards. The presentation mentions that 4 GB models of the GeForce GTX 960 will launch in March and also mentions to stay tuned for more information. It's likely that NVIDIA allowed AIBs to develop and manufacturer 4 GB models of the card after demand from the consumer market since many users were expecting the same 4 GB memory on the budget level card as the high-end GeForce GTX 970 and GTX 980.

While it's not know how many manufacturers will actually release 4 GB variants, they will start showing up in Spring 2014 before Q2 begins. This will allow NVIDIA to sell a bit more GTX 960 graphics cards before AMD will start to release their own new series of graphics cards such as the rumored Trinidad and Fiji GPUs which are looking to offer huge performance jumps over previous generation AMD cards. While NVIDIA will stick with GeForce 900 series for a while completing the lineup from top to bottom and the eventual release of the GTX 960 Ti since the 960 leaves a huge gap between itself and the GTX 970, the company is no way ending its spree of launching high-performance chips geared towards the enthusiast and professional crowd. As was recently seen, NVIDIA has the GM200 GPU ready under its bags and many rumors are currently suggesting a launch in March during the GTC 2015 presentation. No one knows whether the chip would be available as a Quadro or GeForce offering first but reports did point to the Quadro M6000 card coming soon.

The GeForce GTX 960 4 GB variants will have the same specifications as the reference GeForce GTX 960 variants with 1024 CUDA cores, 64 Texture mapping units and 32 Raster operation units. It is clocked at 1127 MHz base and 1178 MHz boost clock. The only difference would be that the card will come with a 4 GB GDDR5 video ram which operates along a 128-bit bus that is clocked at 7.00 GHz (1753 MHz QDR), pumping out 112 GB/s of cumulative bandwidth. The GeForce GTX 960 graphics card will feature a TDP of 120W that will be provided by a single 6-Pin connector while display outputs include Dual-DVI, HDMI 2.0 and a single display port. Technology such as DirectX 11.3 and DirectX 12 API support will be available. Lastly, the card features a single SLI goldfinger that limits it to only 2-Way SLI configuration however that’s expected from a marketing perspective of this budget card.

Pricing is no where mentioned but the card could sell at a hefty premium for featuring more memory chips across the board. The retail prices could be as much as $249 US at launch with custom designs adding more to the cost. The lower 128-bus would translate to no actual performance gains in higher resolution gaming so it will remain to be seen whether 4 GB VRAM models are actually something good.