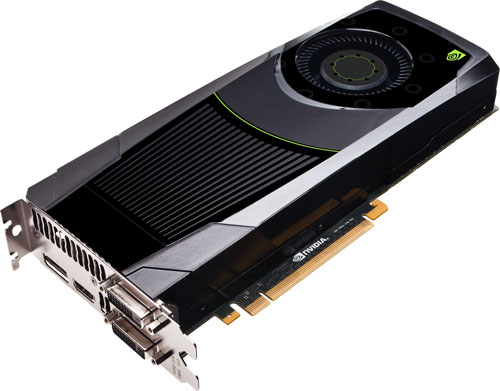 Latest reports from Taiwan manufacturer's suggest that NVIDIA would be launching two GPU's based on the Kepler 28nm Architecture in May - GeForce GTX 690 and GeForce GTX 670. Sweclockers also confirms this from its own sources that a GeForce GTX 670 based on the GK104 chip is currently slated for launch in Mid-May.

Two days earlier, NVIDIA revealed a teaser shot of an upcoming product on its GeForce facebook page which hinted at a graphics card. Conformation once again came from Sweclockers who suggested that the card is the next generation dual chip flagship which would feature dual GK104 cores.

The GeForce GTX 670 or 670Ti as noted in our earlier posts is most likely a cut down version of the GTX 680 with a lower price tag. This model would complete against the HD7950 which after its price cuts falls at the $400 category. NVIDIA's only release Kepler product "GeForce GTX 680" is priced at $499 and competes against the HD7970 which is now $20 cheaper than the NVIDIA card.

The price of the GPU is not known yet, Specs would include the same 2GB 256-bit memory interface and 1000+ Cuda Cores. Hopefully more details would pop up by the end of April.