NVIDIA GeForce GTX 1080 and 1070 are the most advanced GPU for gamers!

The NVIDIA GeForce GTX 1080 and GeForce GTX 1070 are the first gaming cards to feature the Pascal GPU. We have already covered the features in detail. The latest FinFET architecture dramatically improves performance and efficiency to the GeForce 1000 series cards. Key technologies which include the 16nm FinFET based Pascal chip, the GDDR5X memory components, superior build design and new gaming initiatives combine to make the GTX 1080 the most advanced graphics card ever to be designed by NVIDIA.

“It’s insane. The 1080 is insane, It’s almost irresponsible amounts of performance,” Huang, wearing a black leather jacket and huge grin, told the crowd of hundreds of gamers at Emo’s, one of music-mad Austin’s top entertainment venues. via NVIDIA

GeForce GTX 1080 retail availability from the world's leading add-in card suppliers, including ASUS, Colorful, EVGA, Gainward, Galaxy, Gigabyte, Innovision 3D, MSI, Palit, PNY and Zotac, will begin at the end of May. Partner boards will vary by region, and pricing is expected to start at $599. If you want to try your hand at winning a GeForce GTX 1080, or even a custom gaming rig, test your puzzle-solving skills in our Order of 10 Challenge.

The NVIDIA GeForce GTX 1080 has now been listed by NVIDIA's AIB partner ZOTAC where it should soon be made available for users to purchase. Furthermore, OCUK has already made a page where they have listed down the GeForce GTX 1080 and GeForce GTX 1070 for pre-order so expect them to go live really soon.

Our friends at Videocardz also pointed out that the reviews for the GeForce GTX 1080 would go live before the official launch on 27th May allowing users to analyze all metrics of the card before purchase. This indicates NVIDIA being confident about their upcoming release which is something good to see.

Using the same air cooler, NVIDIA was able to overclock their GeForce GTX 1080 to 2.1 GHz. At these insane clocks, the cooler managed to keep the temperature stable at 67C which is insane knowing that this is a reference design. But users who are willing to purchase the non-reference, custom models will be able to do so on 27th May with powerful PCBs and beefy coolers (Air/Water/Hybrid). The non-reference coolers will start at pricing of $599 US.

"NVIDIA’s flagship GeForce GTX 1080 is the most advanced gaming GPU ever created, powered by the high-performance, energy-efficient new NVIDIA Pascal architecture. Pascal enables truly game-changing performance with captivating sights and sounds, as well as next-generation VR performance that offers the lowest latency and plug-and-play compatibility with leading headsets." via ZOTAC

The clock speeds are maintained at 1607 MHz base and 1733 MHz boost but the FinFET architecture allows for extreme overclocking as demoed at the event. The chip is built to deliver 9 TFLOPs of compute horserpower. NVIDIA went with 8 GB of GDDR5X (next-gen) memory on the GeForce GTX 1080 graphics card. The memory is featured across a 256-bit bus and clocked at 10 GB/s. This leads to a total bandwidth of 320 GB/s. Like the core, the memory also features great overclocking potential with clock speeds that can be pushed to around 11-12 GB/s.

The NVIDIA GeForce GTX 1080 features a TDP of just 180W. The rated TDP is just 15W higher than the GeForce GTX 980 but at the same time, delivers performance better than dual 980s. Coupled with a very smooth power delivery system to avoid leakage, the chip is one of the most efficient GPU architecture ever designed for PC gamers. Power is fed through a single 8-Pin connector.

The display out puts for the card include Display Port 1.4 (4K @ 120 Hz / 8K @ 60 Hz), HDMI 2.0b (4K @ 60 Hz) and DL-DVI which means that it is capable to support all next-gen displays with new standards. Along with new technologies implemented for gamers such as SMTP, multi-monitors gamers will be able to extract more image quality and better performance from their PCs.

The NVIDIA GeForce GTX 1080 and GeForce GTX 1070 fully support HDR technologies which will be arriving in the latest iteration of display panels from various manufacturers.

One of the key features of the NVIDIA GeForce GTX 1080 Founders Edition and the GeForce GTX 1070 Founders Edition is that both cards are designed to look great. The founders edition features a beautifully crafted cooling shroud that is built with aluminum alloy. The craftsmanship extends beyond the shroud as the 1080 deploys an advanced vapor chamber to cool the graphics chip. Featuring a dense aluminum fin array, the heatsink allows a cool design that maintains low temperatures and huge room for overclocking.

NVIDIA has also designed a top-notch PCB for the GeForce GTX 1080 to match the looks of the card. This PCB features an array of high-quality components that deliver smooth current to the chip and memory for stable operation while gaming. The PCB also allows enthusiasts and overclockers to get the best clock frequencies out of the GeForce GTX 1080 and GeForce GTX 1070 reference cards. 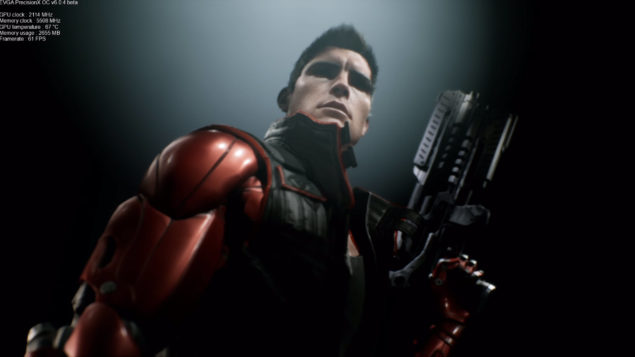 Beauty shots of the GeForce GTX 1080 Courtesy of HardwareLuxx!