NVIDIA has officially announced their partnership with game developer Ubisoft to offer the best possible experience on NVIDIA GeForce graphic cards. Some of the falls hottest titles are being prepped by Ubisoft including Assassins Creed IV: Black Flag, Splinter Cell: Blacklist and the highly acclaimed Watch Dogs. 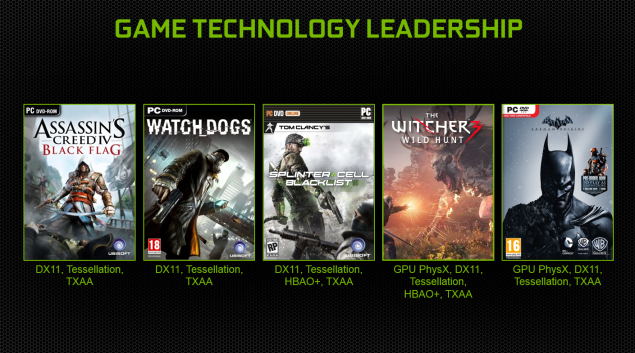 Like AMD who would offer exclusive optimization for EA titles including the blockbuster Battlefield 4, NVIDIA would offer exclusive features, bundles and optimizations for their NVIDIA GeForce graphics card with latest titles from Ubisoft offering more realism and immersive experiences to PC gamers. Features like smooth and fluid animations, soft shadows, HBAO+ (horizon-based ambient occlusion) and advanced DX11 tessellation would be implemented in the upcoming titles from Ubisoft offering the best possible gameplay experience on the PC as a platform.

"PC gaming is stronger than ever and Ubisoft understands that PC gamers demand a truly elite experience -- the best resolutions, the smoothest frame rates and the latest gaming breakthroughs," said Tony Tamasi, senior vice president of Content and Technology at NVIDIA. "We've worked closely with Ubisoft's incredibly talented creative team throughout the development process to incorporate our technologies and deliver the most immersive and visually spectacular game worlds imaginable." NVIDIA

"The PC remains one of the world's most popular gaming platforms, and we're committed to offering PC players the best possible experience with our games," said Tony Key, senior vice president of Sales and Marketing at Ubisoft. "Combining NVIDIA's visual computing expertise and the creativity of our development teams will give customers a stunning experience when choosing an Ubisoft game for the PC."