NVIDIA has announced their financial analyst results for third quarter of the fiscal year 2016 and the highlight of the earnings over at green team is once again the strong lead in the gaming department. While we are going to post a detail post on the results later on, it should be highlighted that the major driver for NVIDIA in their Q3 revenue was the growth of the GeForce gaming market with strong products and support for the latest and up coming AAA titles. 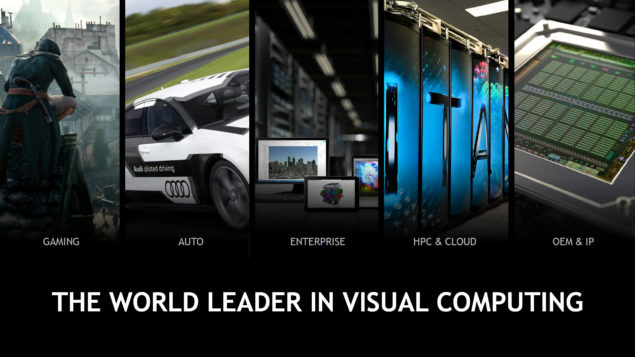 NVIDIA has had a really good Q3 as they have reported their GPU business, not only staying in the green but reporting record revenue. NVIDIA's GPU business was up 16% (Quarter/Quarter) and up 12% (Year/Year). The GPU revenue was up from $959 million in the previous quarter to $1110 million in the current quarter while last year, in Q3 2015, this revenue was steady around $991 US. Overall revenue was up 13% (Quarter/Quarter) and up 7% (Year/Year) with a total reported revenue of US $1305 million. NVIDIA mentions that In Q3, their  four key market platforms contributed to 85% of revenue up from 71% a year earlier. These include Gaming, Professional Visualization, Data Center and Auto business. The Gaming and Auto sectors were the main growth drivers for NVIDIA in Q3 2016. 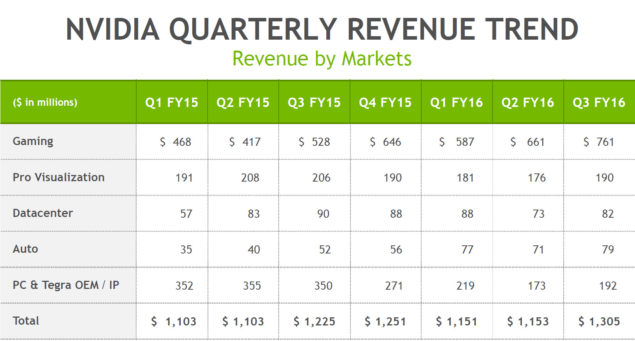 Our record revenue highlights NVIDIA's position at the center of forces that are reshaping our industry," said Jen-Hsun Huang, co-founder and chief executive officer, NVIDIA. "Virtual reality, deep learning, cloud computing and autonomous driving are developing with incredible speed, and we are playing an important role in all of them. We continue to make great headway in our strategy of creating specialized visual computing platforms targeted at important growth markets. The opportunities ahead of us have never been more promising. via NVIDIA

Some of the highlights for NVIDIA Third Quarter of Fiscal Year 2016 in the gaming department were: 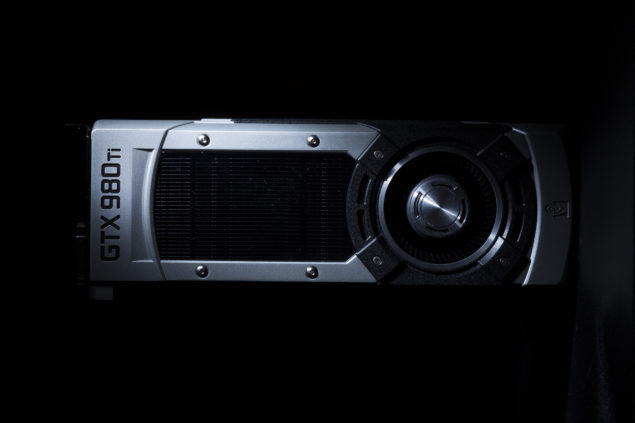 Now these are some highlights but if we see the trend beginning from Q4 2014, NVIDIA's discrete GPU market share went up like a rocket and continues to grow as their Maxwell generation of graphics cards are welcomed by the consumers. More cost effective options such as the GeForce GTX 960 and GeForce GTX 950 have been maintaining a steady growth for NVIDIA in this market while the enthusiast grade options have amounted for a significant amount of sales with competitive performance against competitor cards. Furthermore, the GTX 980 Ti has maintained its performance over the new entrants from AMD in their Radeon lineup with competitive price and performance plus a variety of AIB made, custom variants which offer more bang for the buck. NVIDIA themselves advertise their GeForce GTX 970 (now US $299) as the entry level option for 1080P VR gaming and cards such as the GTX 980 and GTX 980 Ti further lead NVIDIA's position in the gaming market. With DirectX 12 and Windows 10 being a major driver for Gaming on the PC platform as more and more titles leverage from the new API, the revenue stream from GeForce market is expected to gain momentum as we move in to Q4 2016.

Talking about Q4 2016, NVIDIA expects their revenue to climb to 1.30 billion (+/- 2%). In 2016, GeForce side will be fueled with the entry of blockbuster AAA titles from several game publishers. Electronic Arts (EA) is going to launch their highly anticipated Star Wars: Battlefront on 17th November, Bethesda will be launching their return to the wasteland on 10th November with Fallout 4, Activision will be launching Call of Duty: Black Ops III while Ubisoft is going to present Tom Clancy's Rainbow Six Siege on 1st December. All of these titles will gain a serious momentum among PC gamers and enthusiasts and NVIDIA has provided a variety of GeForce GTX cards to choose from. It is also a fact that two major APAC markets which include China and Japan have seen a major shift of gamers from mainstream to enthusiast level graphics cards as NVIDIA has reported a wider adoption of faster graphics cards of the GeForce family within these regions.

"First of all, we respect our competitors, I mean we take our competition seriously. You know that as a company,  we compete pretty intensively and this is a company that has seen a lot of competition over the years and so we take competition seriously. We respect the capabilities of our competition. However, I think that its also very very clear that our business and our business model and our strategy is completely different than AMD and the graphics chip company it used to be along time ago and our company is just on a different trajectory. Our approach to building products is different, Our approach to going into market is different, Our approach in engaging the ecosystem is different. I can't  imagine to tell you a more different company to tell you the truth. You know as much as we are always on alert and paranoid about... We don't take our position for granted and we are thoughtful about competition. We have our own work to do and our own platform to do, we have our own ecosystem to go and care for and nurture and push forward and so I think i appreciate the question but I can't imagine a more different company to tell you the truth." transcript via investor.nvidia.com  (time- 00:50:26). 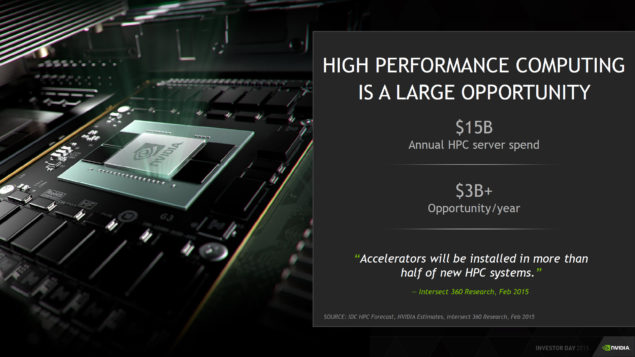 NVIDIA has clearly stated that they respect the capabilities of their competition (referring to AMD) and there's no doubt about that as AMD has released some great cards in their Fury series and the first graphics vendor to adopt HBM architecture. Moving in to 2016, NVIDIA is likely to launch Pascal GPUs which will further leverage NVIDIA's position with the first GPU manufactured by the green team to use HBM and 16/14 nm FinFET process node. So this is it for now, you will have a more detailed look at the financial results of NVIDIA's third quarter report shortly.