The Nvidia GDC 2015 event just ended and it had some pretty interesting mentions throughout. However probably the thing to get most excited about is the Nvidia's new micro-console. It doesnt have a chip in either the PS4 or the Xbox One and it looks like they will be entering the console market with their own offering. And while SoC Class devices cannot really be expected to keep up with high performance APUs (that are present in the likes of Xbox One and PS4) this is exactly what Nvidia aims to do (and might actually succeed at) by using GRID's distributed computing. 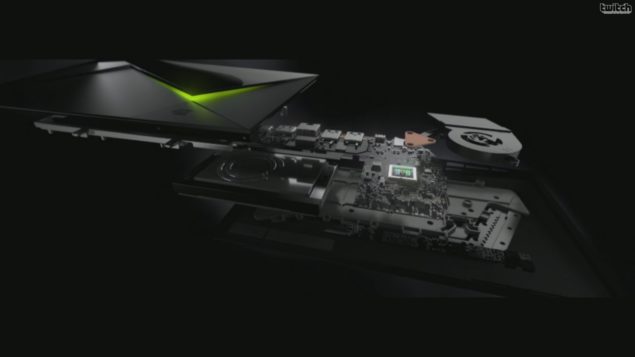 An official render of the Tegra X1 powered internals. @Nvidia Public Domain, All screens via Anandtech.com

I admit I have mixed feelings about this release. What Nvidia is claiming to achieve is preposterous, somewhat done before and unlikely to succeed at the same time. Yet, it is without a doubt, something that is potentially disruptive. If this product takes off, it will be successful beyond anything that we could have imagined. Tiny form factor, 4K playback  and AAA gaming with a competitive price tag is most definitely something with a very big market. Before we get into the nitty gritty of the microconsole here are some official remarks and the specifications of the SHIELD entertainment device.

Powered by GeForce® GTX™ supercomputers in the cloud, GRID delivers an on-demand "Netflix for games" experience at up to 1080p resolution at 60 frames per second. "SHIELD will change the way we enjoy digital entertainment at home," said Jen-Hsun Huang, president and CEO of NVIDIA. "It's an incredibly powerful, efficient and advanced living room entertainment device. It's the best Android TV experience. And it can transform into a serious gaming machine. It's made to game."

Now here is the thing, voice recognition is a technology that still isn't perfected, and when you are taking a stand this prominent, you need to make sure everything goes smoothly. If the tech doesn't perform as expected, it could seriously damage Nvidia's sales because of a simple lack of intuitive use. The remote itself doesn't really appear to be that much of a looker, and while it gains points for the militaristic design, style is not really one of its strong suites.

Now lets talk a bit about GRID streaming on the console. Basically, GRID is the supercomputer or distributed computing infrastructure that Nvidia previously used for compute purposes. Graphical horsepower in such a venture is obviously not an issue, latency, lag and stream quality is. You can minimize lag and latency by compromising on streaming quality and compression but if Nvidia wants this to be a disruptive thing and actually compete with the proper consoles, not just Ouya, the tech needs to be perfect (once again).

While I did not notice any serious lag or latency issues, deciphering compression quality is obviously impossible on a live stream.  Keep in mind that the maximum output of the device is 4K while GRID computing outputs 1080p 60 frames per second. On a 4K output device, you are already getting blurriness due to the lower resolution and compression losses/artifacts won't make it better.

The microconsole will feature two gaming modes. Inhouse or local gaming and gaming over GRID aka streaming. The local gaming will be powered by the 256 Maxwell cores present in the Tegra X1 while GRID gaming will utilize Nvidia's vast distributed computing architecture over the cloud. Local gaming horsepower is roughly twice that of the Xbox 360 while cloud gaming horsepower will be roughly thrice of the Xbox One. If cloud is something that floats your boat, in a way, you are looking at one of the most powerful console/microconsole in the market.

The games that run locally will be mostly AAA titles ported over to the Android platform. Nvidia already demoed Crysis 3 running at 30fps (resolution not mentioned) which is pretty damn impressive. About 50 titles have already been ported and will be available at launch. So that's about 50 full AAA titles on the GRID and 50 ported AAA titles on the console itself. The list is given in the slides above and you are looking at a combined total of 100 titles (GRID and local combined) at launch. That's more than a fair deal for the price tag of $199 although whether everything works is a completely different question - you will have to wait for third party reviews before that. SHIELD will be available in May, starting at $199 with a controller. Optional accessories include additional controllers, a remote control and a stand enabling the device to stand vertically.