NVIDIA has released the source code of their GameWorks feature known as HairWorks on GitHub. This is just a few days after NVIDIA added source code of other gaming technologies following their GDC 2016 presentation where the graphics company announced their latest GameWorks 3.1 SDK for developers. The new features that are now available through GitHub include HairWorks, FaceWorks and Volumetric Lightning.

The source code for all three features which are incorporated in the latest AAA titles are available to all devs to use in their gamers. As we remember, NVIDIA's HairWorks was featured in Witcher 3: The Wild Hunt which was announced as the Best RPG of 2016. The game utilized the power of NVIDIA's powerful tessellation engine to render the hair on not only majority of in-game characters but also several monsters. The HairWorks renderer was used to simulate and render both fur and hair to provide a real life experience. 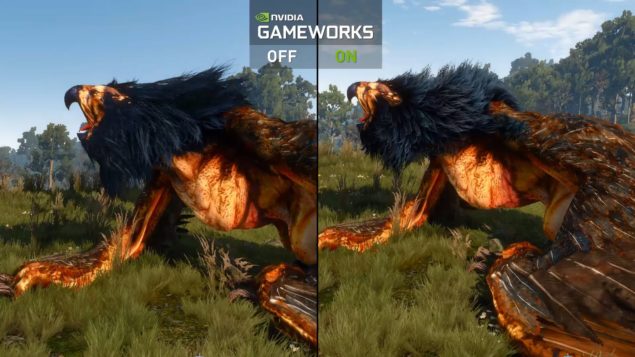 Another feature that is part of the GitHub release is Volumetric Lightning which was enabled in Fallout 4. The next chapter in Fallout Universe went on to become the Game of the Year for 2015. The game featured one of the best implementation of God Rays which were simulated on the GPU and leveraged from GPU tessellation. This feature added a lot of atmospheric depth to an already great AAA title and looked great in motion.

In 2015 we started releasing source code for GameWorks libraries on GitHUB. We continued that at GDC 2016. Our intention is to advance graphics and simulation in gaming and be helpful to those that create games. As promised at GDC, this morning source code for HairWorks was made available on GitHUB.

The Witcher 3: Wild Hunt, the open-world fantasy role-playing game from developer CD Projekt RED, just walked away with the Game of the Year award at the 16th annual Game Developers Choice Awards ceremony during the 2016 Game Developers Conference. The critically acclaimed title also received the award for Best Technology for its complex game engine that combines brilliant visuals with a huge game world.

NVIDIA has also released a roadmap stating that they will be offering more updates to the Gameworks 3.1 SDK in June followed by the release of the Gameworks 3.2 SDK in September 2016. More updates and information related to Gameworks will be revealed at upcoming events so be sure to stay tuned. There is also meant to be even more source code releases on GitHub and the next major release that arrives in June 2016 will include the HBAO+ libraries which are currently in use by a majority of AAA titles.