Unity Technologies announced today at GDC 2016 that their engine will now support NVIDIA VRWorks, including VR SLI and Multi-res Shading. NVIDIA also released their Gameworks 3.1 SDK on Github that incorporates several technologies aimed to enhance the GeForce and PC Gaming ecosystem that have been included in some of the best AAA titles to date. 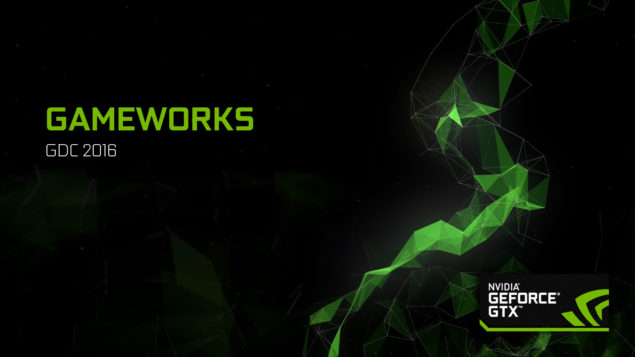 According to NVIDIA, direct support built within the Unity engine will make integration of NVIDIA VRWorks a lot simpler for game developers. VRWorks, already supported by Epic's Unreal Engine 4, is NVIDIA's Software Development Kit (SDK) for VR. The following slide from NVIDIA shows all the latest technologies incorporated in Gameworks since its emergence: 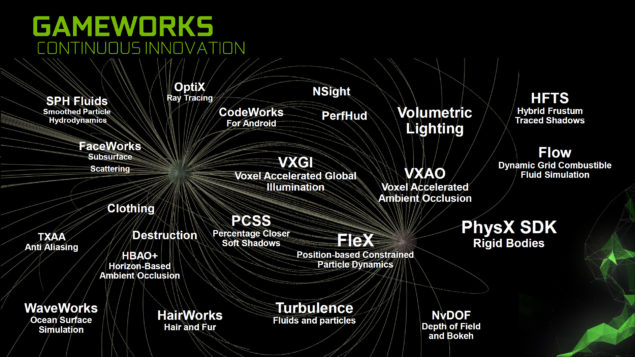 Two key features for game and application developers are:

Those interested in more technical details may read this brand new presentation document. Unity Technologies has a live stream event due at 9AM PT today, where we can expect further announcements about the Unity engine. 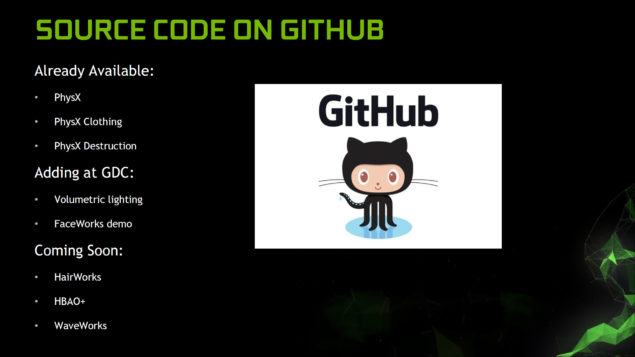 In addition to the VRWorks announcement, NVIDIA also announced the worldwide availability of Gameworks 3.1 SDK which will include the latest gaming technologies. The new software developers kit introduces new groundbreaking graphics techniques for shadows and lighting as well as two new physical simulation algorithms released as betas. 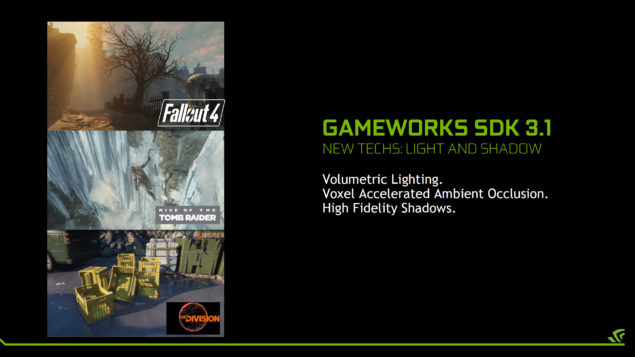 “It’s our passion for gaming that drives us to tackle the technical problems presented by real-time rendering and simulation,” said Tony Tamasi, senior vice president of content and technology at NVIDIA. “Our GameWorks technologies push the boundaries of what’s possible in real time, enabling developers to ship their games with state of the art special effects and simulations”.

The three new GameWorks rendering techniques for lighting and shadows include:

We had previously learned that Rise of the Tomb Raider also uses NVIDIA VXAO which is a Voxel based ambient occlusion effect whose tracing is approximately three times cheaper than full fledged Global Illumination.When compared to SSAO, this kind of Ambient Occlusion also provides a more stable effect throughout the rendered world. This technology has a co-relation with ROVs (Rasterized  Ordered Views) on new cards such as Maxwell and is a part of the DirectX 12 API.

To create that volumetric light spilling across the scene (sometimes called “god rays”) Bethesda worked with NVIDIA, who’ve they worked with dating back to Morrowind’s cutting-edge water. The technique used here runs on the GPU and leverages hardware tessellation. It’s beautiful in motion, and it adds atmospheric depth to the irradiated air of the Wasteland. Like all the other features here, we’ve made it work great regardless of your platform. NVIDIA as a key partner to leverage image quality of Bethesda’s Fallout 4 title.

NVIDIA Hybrid Frustum Traced Shadows (HFTS) used in The Division which is a part of the Gameworks 3.1 SDK. HBAO+ and PCSS are features that run well with NVIDIA’s Kepler and Maxwell based cards but the latest HFTS (Hybrid Frustum Traced Shadows) feature is a totally new technology being introduced today which is in general an advanced shadow technique that utilizes the geometry engines of NVIDIA’s Maxwell GPUs to create realistic and accurate hard shadows.

The pair of extensions to the NVIDIA PhysX library include:

NVIDIA has also released a roadmap stating that they will be offering more updates to the Gameworks 3.1 SDK in June followed by the release of the Gameworks 3.2 SDK in September 2016. More updates and information related to Gameworks will be revealed at upcoming events so be sure to stay tuned. 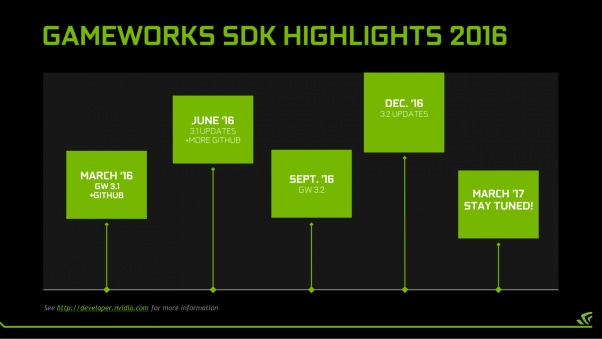 1) NVIDIA is building the fastest GPUs for VR.

“VR will be a multi-tier experience, like all entertainment platforms. Consoles will appeal to the casual user, whereas the PC with three to four times the processing power will be the platform for the intense gamer. In the PC market, NVIDIA has a substantial market share in enthusiast graphics boards, the type needed for Oculus and HTC VR experiences.”

NVIDIA has created the VRWorks software development kit to provide headset and application developers with the best performance, lowest latency and plug-and-play compatibility for VR. The top game engines that are being used for creating VR games, including Unity, Unreal Engine and Max Play, are now integrating NVIDIA VRWorks. HTC and Oculus headsets have added support for VRWorks. It’s being adopted by cutting-edge VR developers like Sólfar Studios with Everest VR, Valve Software with The Lab, ILMxLAB with Star Wars Trials on Tatooine and InnerVision Games with Thunderbird: The Legend Begins.

NVIDIA Multi-res Shading is an innovative rendering technique for VR in which each part of an image is rendered at a resolution that better matches the final image a user sees on the headset. The technology is integrated and available today to developers in Unreal Engine with performance gains of up to 50 percent. That enables developers to put more visual quality into their VR games and experiences

Any solution is only as good as the GPU’s drivers. Our Game Ready drivers are recognized as the best in the industry. NVIDIA works closely with developers to make sure games perform well on the day the game ships. This is incredibly important for VR, as the slightest stutter or performance dip can ruin the experience. Delivering launch day drivers will be a big difference for VR games and applications.

NVIDIA’s GeForce GTX VR Ready program makes it easy for consumers to get the right gear for VR. Navigating an emerging technology like VR can be confusing — so we’ve worked with our partners worldwide to simplify the buying process. The GeForce GTX VR Ready badge quickly shows if a PC or graphics card is capable of handling the demands of VR. Our program currently has more than 100 PC makers, system builders, add-in card partners and retailers around the globe.

6) VR-ready notebooks are powered by NVIDIA.

Notebooks that feature NVIDIA GeForce GTX 980 GPUs are the only VR-ready notebooks in the world. These powerful NVIDIA notebook GPUs enable developers and gamers to take their immersive VR experiences with them on the go.

In addition, NVIDIA is not the only one with a VR-ready program. Oculus, makers of the Rift headset, has its own program. And every Oculus Ready PC to date is driven by an NVIDIA GeForce GTX GPU.

There is a misconception that VR requires performance capabilities out of reach for most gamers. Truth be told, the GeForce GTX 970 GPU is the most popular graphics card on the Steam survey and millions already have it in their machines. This means more consumers are ready to enjoy immersive VR today.

NVIDIA is continuing to push forward the state of the art for mobile-based VR experiences. You can find NVIDIA Tegra processors powering several mobile VR and augmented reality devices, including headsets from GameFace Labs and Atheer. Thanks to the performance of Tegra, developers can tackle new classes of mobile VR/AR experiences.

NVIDIA GPUs are at the heart of 360-degree video used in VR. NVIDIA’s CUDA programming model is used to rapidly stitch video from multiple cameras together into a single 360-degree panorama. At NVIDIA’s GPU Technology Conference in April, attendees will find a full speaker track on VR, including talks from 360-degree video companies that use GPU acceleration, such as Jaunt VR and VideoStitch. via NVIDIA Blog