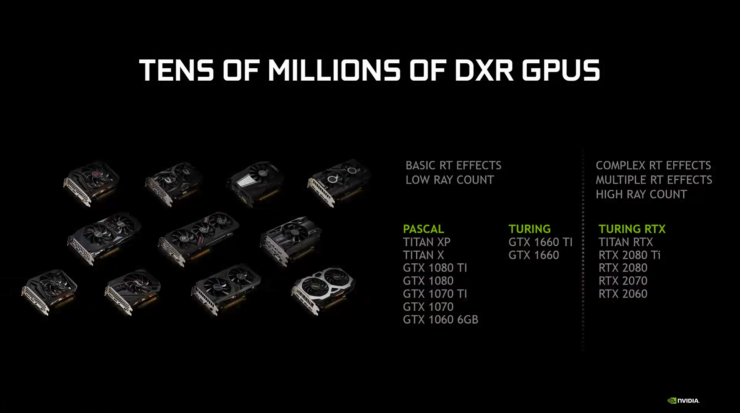 NVIDIA has just announced that they will be enabling Microsoft DXR real-time raytracing support on their Pascal based GeForce 10 series graphics cards. The announcement comes straight from Jensen Huang during his GTC19 keynote who has stated that they want to enable the wider GPU market to utilize the new API and the gorgeous raytracing capabilities that it brings to gamers in AAA titles.

At CES 2019, NVIDIA enabled VESA Adaptive-Sync technology available across all GeForce cards on non-G-SYNC panels. This announcement was pleasantly received by the gaming community who now had the option to choose from a wide variety of monitors and those running a FreeSync panel would now get smooth, tear-free gaming with a compatible GeForce graphics cards.

Come GDC 2019, NVIDIA is now enabling another feature which was previously locked down to the newly released Turing GPU based graphics cards. That's support for Microsoft's DXR API which will enable real-time raytracing capabilities in existing and upcoming gaming titles. Starting off with the GeForce 10 series cards, the Pascal-based lineup is still widely popular among the masses and has a large user base. However, Pascal owners cannot use DXR API since the support wasn't available until now. 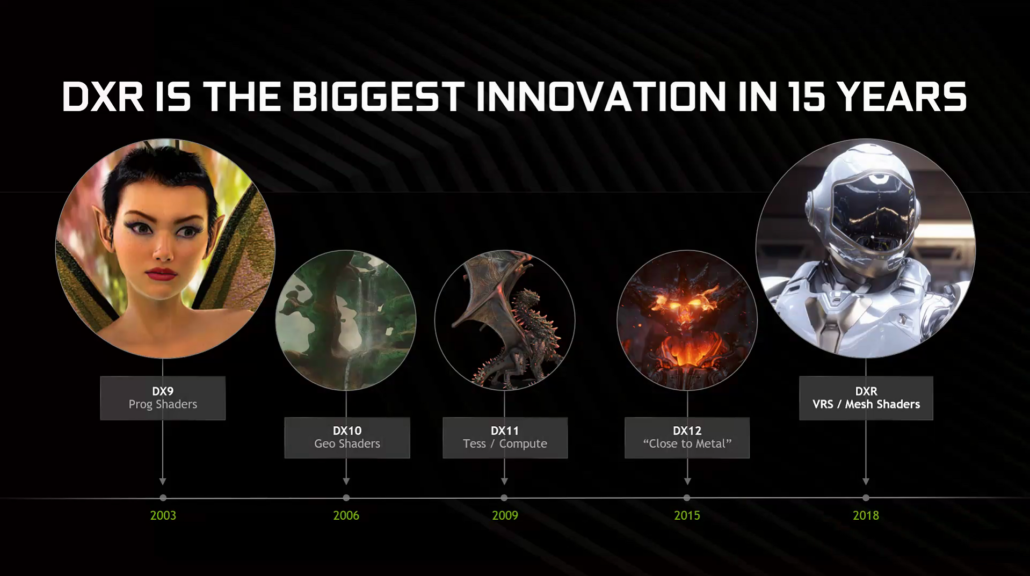 NVIDIA has announced that they will be releasing a new GeForce Driver in April which will enable DXR support for Pascal GeForce 10 series and Turing GeForce 16 series graphics cards. The cards that will be supported through the latest driver will include:

The driver will also support NVIDIA GeForce and Max-Q based notebooks with the respective GPUs so that's another reason you should be excited for your Pascal graphics cards.

According to NVIDIA, while all of these non-RTX cards would indeed support real-time raytracing, the feature will be limited to Basic RT effects along with a lower ray count than what's possible on the architecturally tuned RTX graphics cards. Features such as raytracing reflections will work fine but the more taxing effects such as raytracing based global illumination would require some serious horsepower and that's where RTX comes in.

The upcoming driver which lands in April will enable support for DXR for the aforementioned cards and existing games with DXR will support the cards just fine with the latest NVIDIA GeForce drivers. The drivers, however, will not enable DLSS support on non-RTX cards as that is a hardware-based feature that's only possible through the use of Tensor cores. 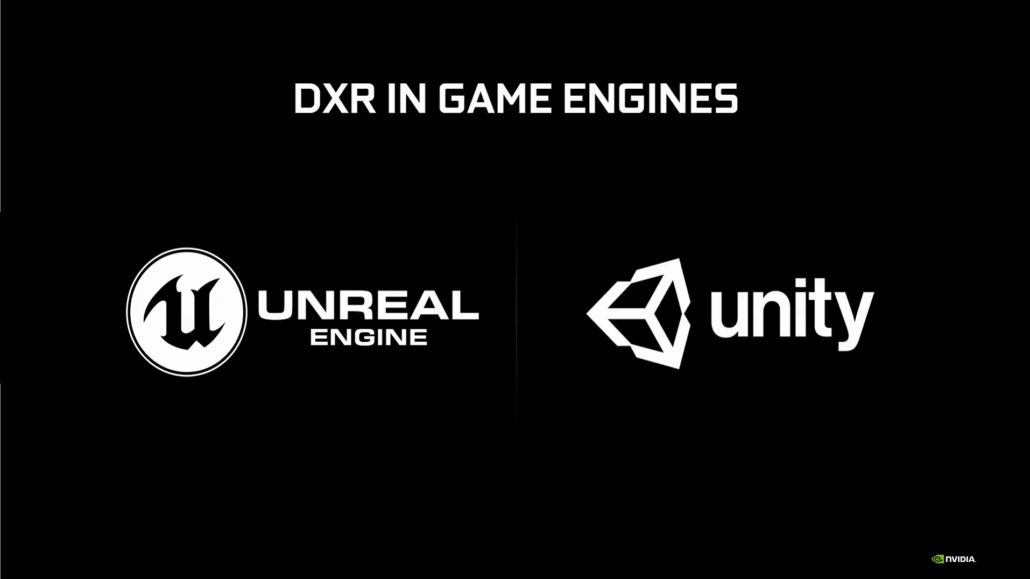 In addition to enabling Microsoft DXR support, NVIDIA also confirmed that they will be releasing extensions for Vulkan raytracing support this week so devs and future titles that utilize the real-time raytracing capabilities on the Vulkan API will be able to do so on GeForce hardware.

Other than that, NVIDIA also announced that DXR support has landed in major game engines such as Unreal Engine, Unity and also CRYENGINE who recently demoed a more open approach to real-time raytracing.

NVIDIA also shared some interesting insights into how Turing allocates its various resources in rendering a scene with real-time raytracing. Metro Exodus was taken as an example and both Pascal and Turing were compared to each other. When it comes to the fastest Pascal gaming graphics card, the GTX 1080 Ti, that beast with its huge *competition crushing* 10 TFLOPs+ compute power only allows for 18 FPS at 1440p resolution. A scaled up version of Pascal that would deliver 60 FPS in Metro Exodus with ray tracing enabled, just based on pure raw FP32 performance would end up being a 650W, 35 Billion transistor chip with a die size of 1324mm2, rocking a total of 44 TFLOPs of FP32 compute power. Simply put, that is not a practical approach. 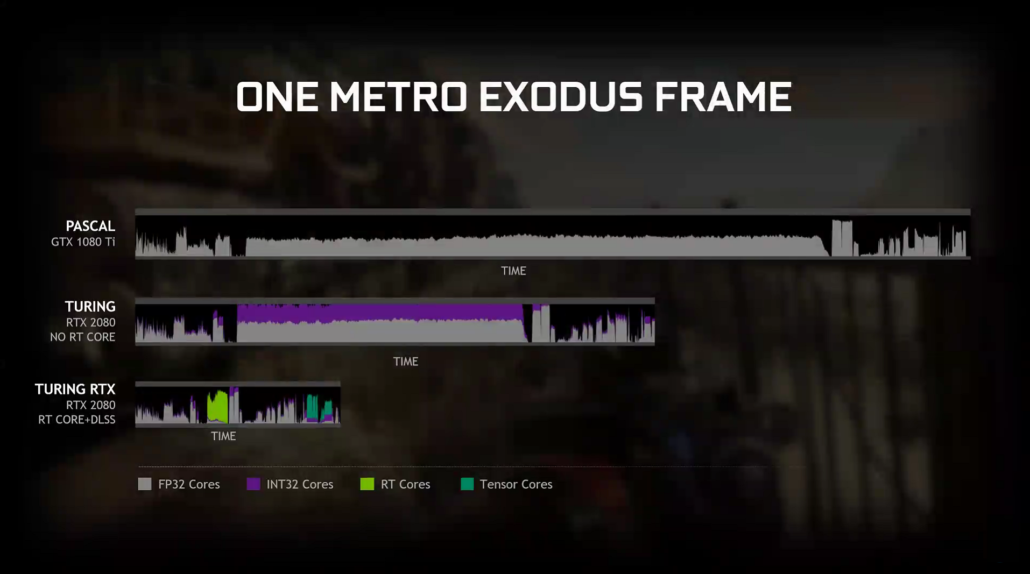 So with Turing and a combination of intelligent RT and Tensor Cores, NVIDIA doesn't have to create a monster GPU but instead can scale down to a more reasonable GPU while delivering decent if not stellar raytracing performance. Following you can see a single frame breakdown of Pascal and Turing GPUs in Metro Exodus. 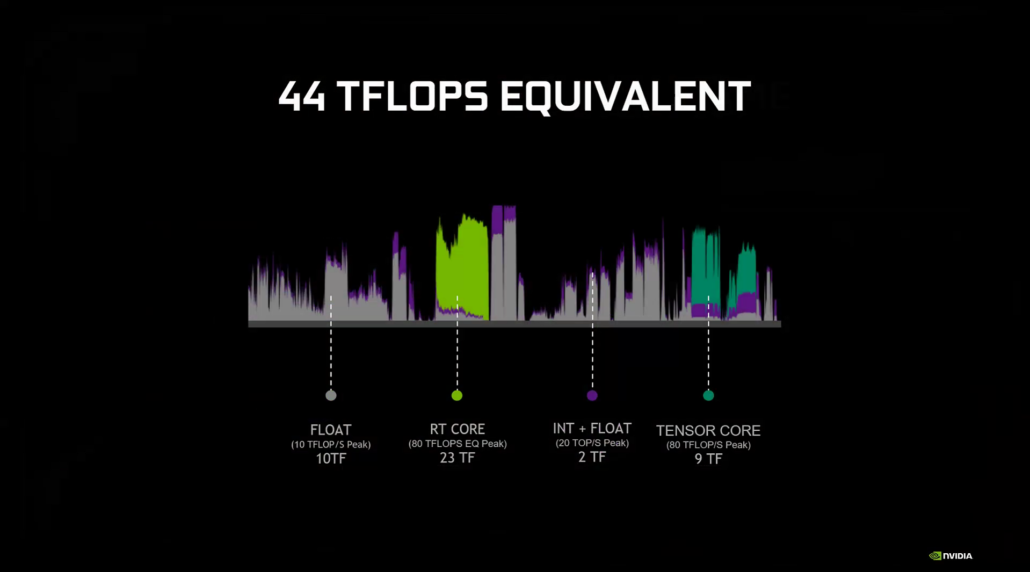 If we take a deeper inspection of the last section, we can see that the peak FP32 and INT32 are only responsible for 12 TFLOPs of Compute while the RT cores enable for 23 TFLOPs and the Tensors at almost 9 TFLOPs with their respective rendering performance. In total, all of these cores combine to give Turing the 44 TFLOPs it needs to deliver 60 FPS at 1440p resolution in Metro Exodus. This is really interesting data that NVIDIA is sharing now and hopefully, it will help users and devs to learn more about how raytracing is to be incorporated in their future titles.