In its latest investor presentation, NVIDIA has termed its Ampere GeForce RTX 30 Series graphics cards as the company's best launch ever. According to the statistics posted by NVIDIA, the green team pushed more Ampere graphics cards than ever before to PC gamers leading to increased share across the PC Gaming market.

In the charts published by NVIDIA, the company shows that Ampere GPUs were its fastest ramping architecture to date, resulting in twice the number of end market sales of GeForce RTX 30 graphics cards. The chart shows immense demand for GeForce RTX 30 series graphics cards during the first 18 weeks since launch and the ramp is still increasing at an exponential rate. 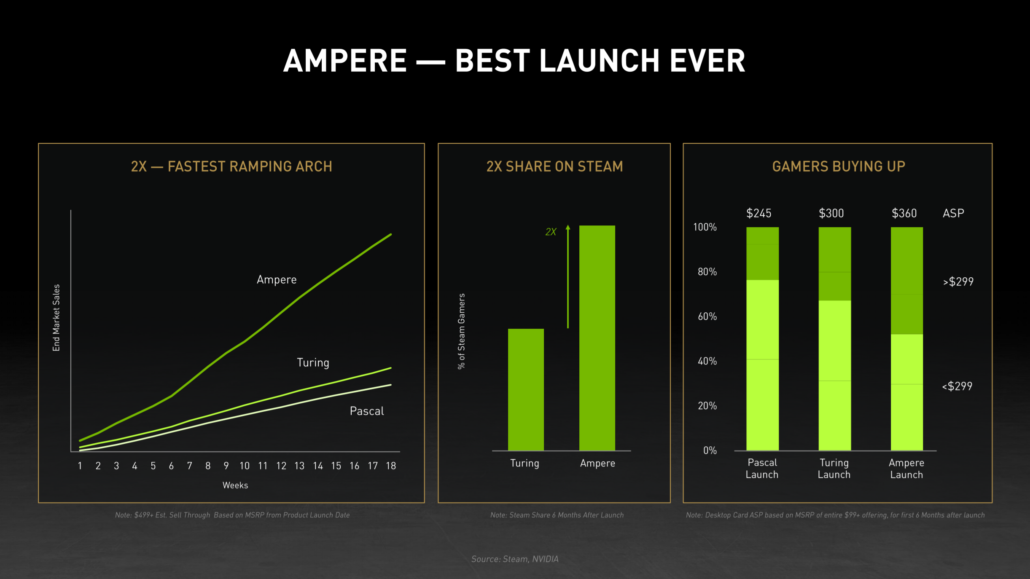 NVIDIA also shows that Ampere GeForce RTX 30 graphics cards amounted to over twice the share versus Turing in Steam. The results here are obtained for the same time period after launch and gamers are just flocking to get hands-on RTX 30 series graphics cards regardless of the insane price points that retailers have them priced at in the current market situation.

Another interesting detail shown by NVIDIA is that more and more gamers are buying up which more or less means that the majority of gamers are now buying high-end graphics cards that cost more than $300 US. The current ASP for Ampere launch averages at $360 and there's also a good reason behind it. The chart is for the first 6 months after launch and NVIDIA initially launched its higher-end GeForce RTX 3090, RTX 3080 & RTX 3070 graphics cards in the market.

All of these RTX 30 offerings cost more than $500 US and factoring in the inflated prices that users paid for them, these numbers make sense. However, the mainstream options such as the RTX 3060 Ti & the RTX 3060 weren't available until later this year which means that their sales haven't made a large contribution to these charts.

NVIDIA also boasts that its GeForce Gaming laptops have increased with a +20% CAGR, outpacing the entire PlayStation 2020 lineup. These numbers amount to all GeForce gaming laptops and not just RTX variants. Despite the huge amounts of GPUs shipped, the GeForce RTX installed base still remains at 15% with the rest of the 85% GeForce gamers running non-RTX GPUs. The upcoming GeForce RTX 3050 series might change that as it would help bring more gamers onboard the RTX bandwagon but availability and supply issues will be the main concern moving forward.