The NVIDIA GeForce RTX 3080 launched today and almost immediately as the sales embargo lifted, every online retailer including NVIDIA themselves crashed. In the meantime, those who had access couldn't find a single card in stock at the few retail stores that managed to stay online. NVIDIA has come forward and not only acknowledged the unprecedented demand that the witnessed with the release of its Ampere flagship but also apologized for all the stock issues that consumers had to face today.

The issues got worse later in the day when customers noted that eBay was filled with several RTX 3080 cards listed by scalpers who were demanding anywhere from $1000 to the north of $2000 US for the cards. However, while scalpers may try to sabotage a consumer-oriented launch to make a profit, some people have resorted to retaliate by either manually placing 'fake' bids on the cards of several thousand dollars or writing bots that do that so that no consumers have to pay such insane and exorbitant prices for the new graphics card (via Overclock3d & Videocardz). 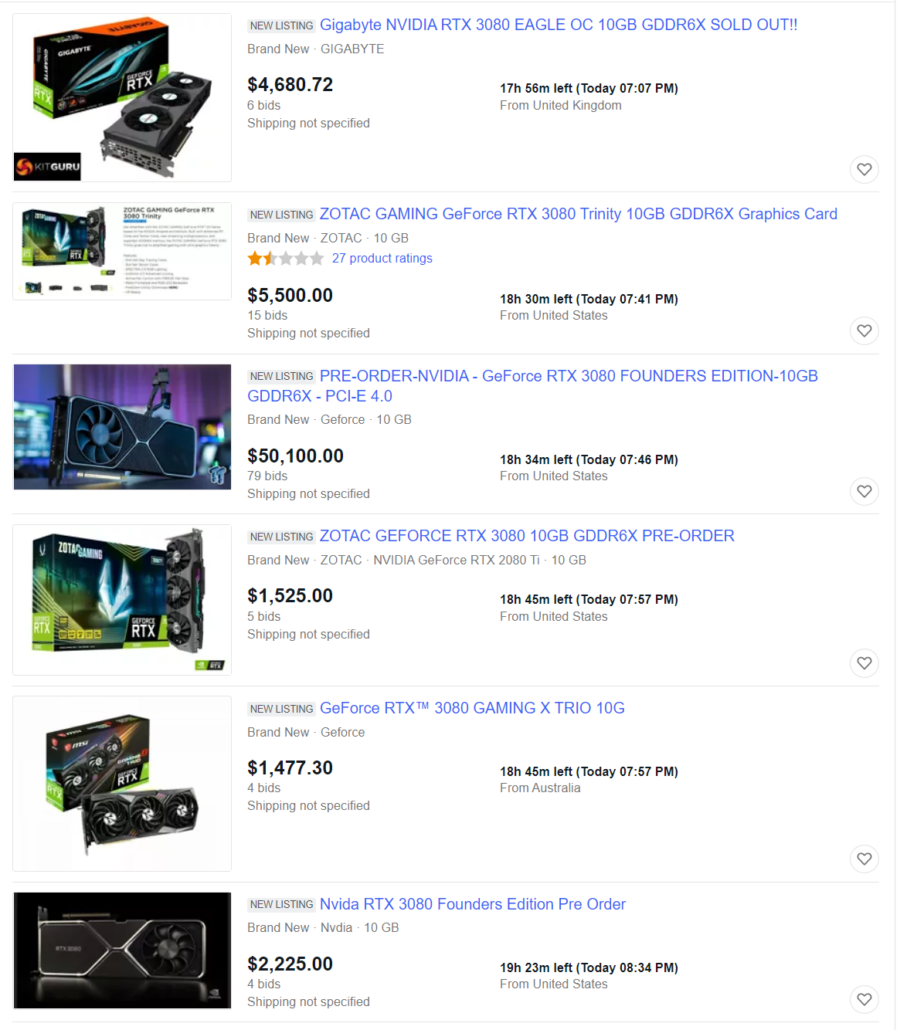 NVIDIA in its official response has stated that they witnessed unprecedented demand for the RTX 3080 series graphics cards and that's evident by the fact that most of the online retail outlets did crash immediately but even after they came back online, the stock just wasn't there which would indicate a low stock for the cards themselves. The following is NVIDIA's official response to today's launch and everything that happened during the past 6 hours.

“This morning we saw unprecedented demand for the GeForce RTX 3080 at global retailers, including the NVIDIA online store. At 6 a.m. pacific we attempted to push the NVIDIA store live. Despite preparation, the NVIDIA store was inundated with traffic and encountered an error. We were able to resolve the issues and sales began registering normally.

To stop bots and scalpers on the NVIDIA store, we’re doing everything humanly possible, including manually reviewing orders, to get these cards in the hands of legitimate customers.

Over 50 major global retailers had inventory at 6 a.m. pacific. Our NVIDIA team and partners are shipping more RTX 3080 cards every day to retailers.

We apologize to our customers for this morning’s experience.” via Legit Reviews

NVIDIA has promised that they along with their partners will be shipping more GeForce RTX 3080 series graphics cards to retailers every day so that those who were planning to purchase a card but couldn't do so due to the half-baked launch day don't miss out the action. NVIDIA also claims that over 50 major global retailers did have inventory at 6 a.m. Pacific Time but they don't say just how big of a quantity there was, to begin with.

The few of those who were lucky to get the cards without any issues were the ones who did show up in actual retail stores and not the online marketplaces. Scenes from Japan's Akihabara Market & MicroCenter in the USA showed long lines of people queuing up to get their hands on the new card and they actually did manage to get them. But with COVID-19 still not cleared away in many regions of the world, not everyone can go out and shop for a graphics card under these circumstances even if their local retail outlets do have one.

Standing in a long line at Micro Center for an RTX 3080
I don't think I'm getting one today... pic.twitter.com/CGPuNvBq1K

What we can say for sure that this is definitely one of the most interesting & broken launch events ever witnessed for a flagship graphics card which indeed had huge demand but the launch has left some customers feeling a bit down afterward. But at least those who were planning to buy an RTX 3080 graphics card now can look at some of the first custom AIB card reviews and make a better & planned decision of their new purchases. With AMD also coming out with their new RX 6000 series cards in the coming month and the more mainstream GeForce RTX 30 series cards hitting the retail segment, more users can make a well-informed decision before making their new purchases.

NVIDIA's next launches include the GeForce RTX 3090 and GeForce RTX 3070. It will be interesting to see how the company, its AIB, and retail partners handle them as they definitely have a lot to learn from today's mistakes.