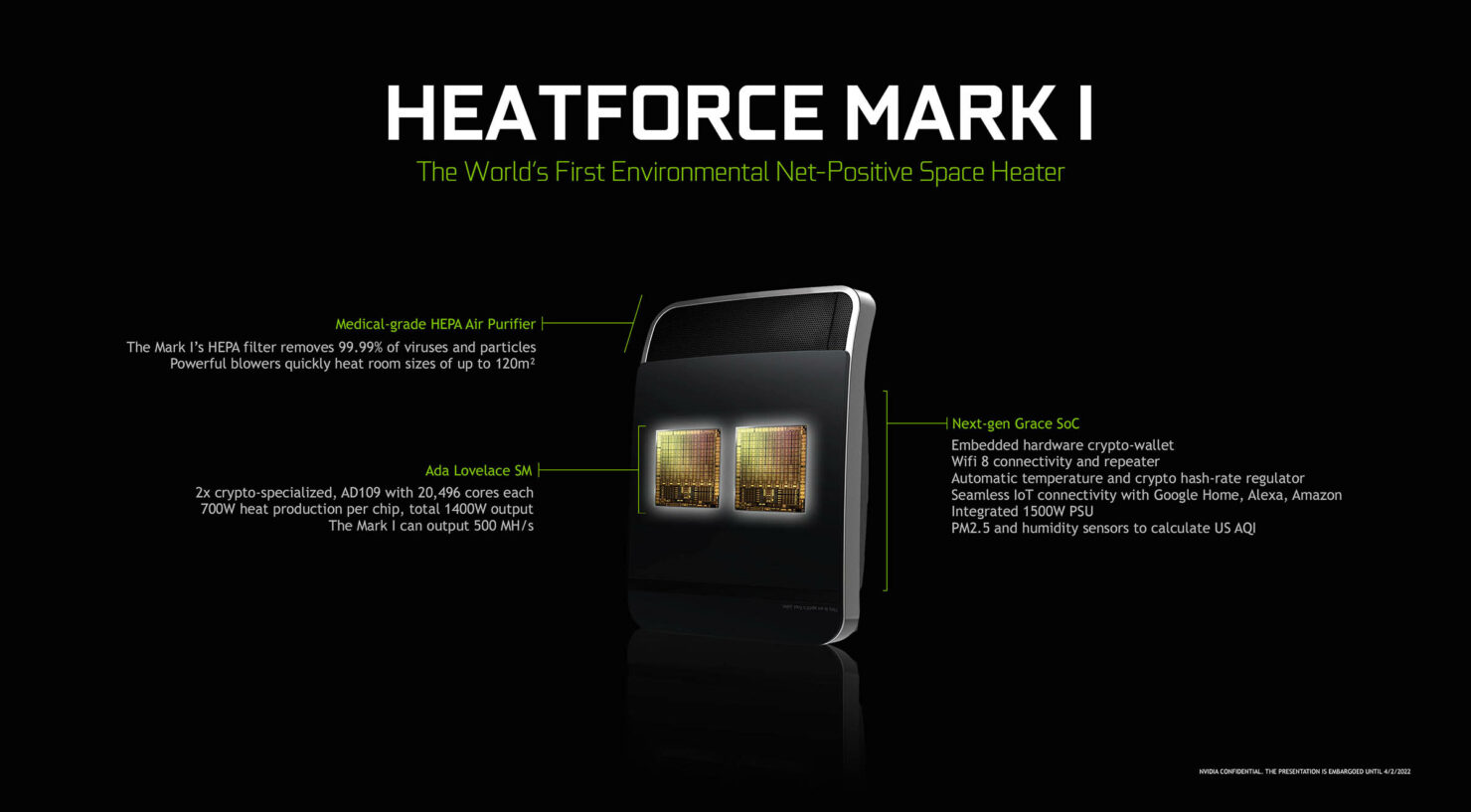 NVIDIA has just announced a highly innovative approach to tackling carbon emissions in the world with their CNHC (Carbon Negative Heating Consortium) initiative and their first HeatForce (HEATFORCE?) Mark I generation of crypto-mining smart heaters. The idea is that instead of using your dumb 1500 watt space heater, why not swap in NVIDIA's smart heater which can (depending on your choice) either give you carbon zero or carbon negativity.

NVIDIA starts with talking about the "Wasted Work" problem. Homes are heated either using gas or electric heaters (and rarely, heat pumps). Considering heat is the end product of pretty much all work done (computations) anyways, this is energy that could have been used to do valuable calculations before being wasted as heat. Based on the profitability rates of today's crypto, NVIDIA estimates that 1500 watts is sufficient to generate roughly $500 in profits (after accounting for your energy bill). 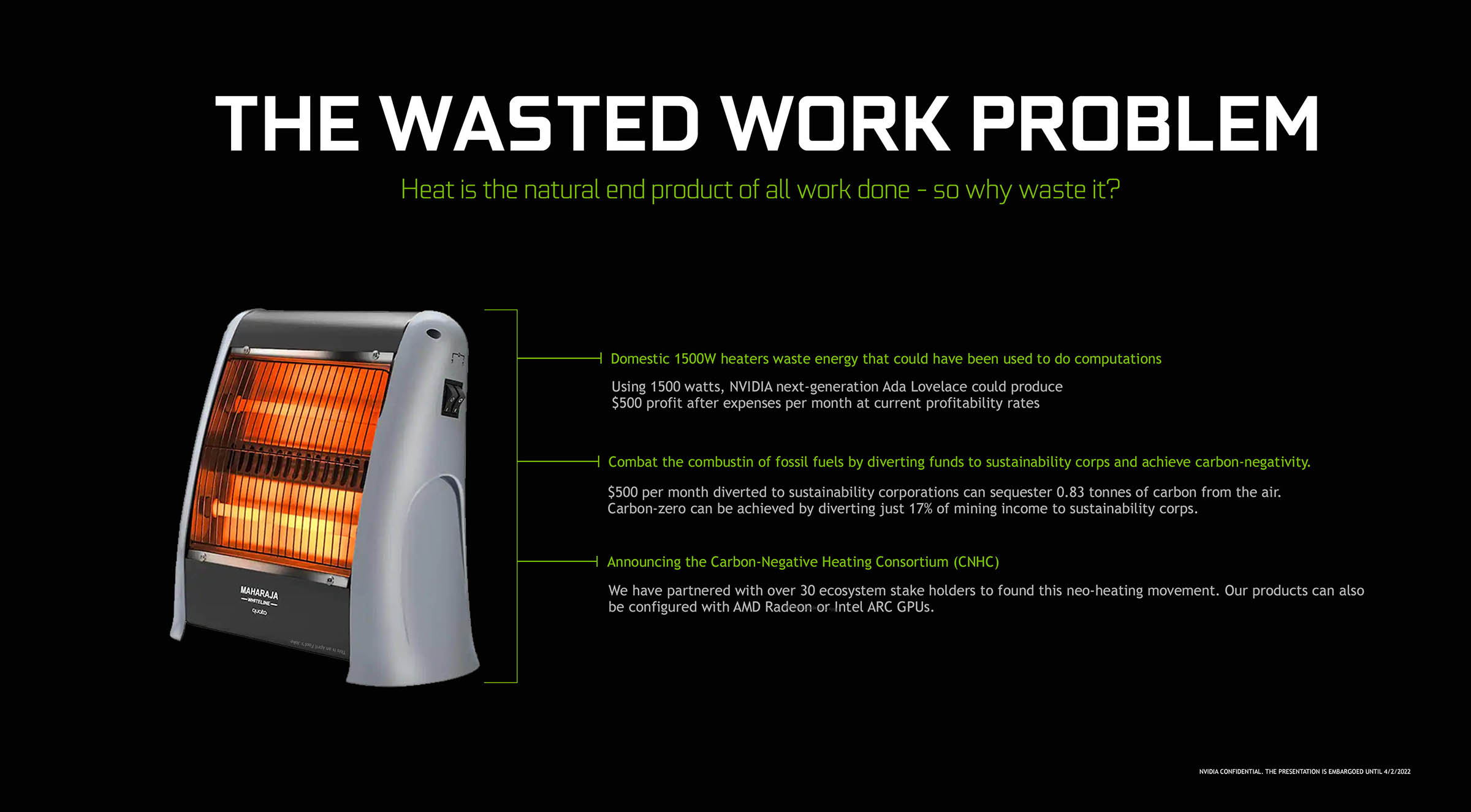 Now let's talk about how this works. If you use a 1500W space heater for 8 hours per day per month, you will use roughly 360 KWH of electricity per month. The rate for CO2 production right now is roughly 0.85 pounds per KWH. This means you are contributing roughly 306 pounds in emissions per month. For those working with SI units, this is 163 KG of CO2 produced per month. Now it costs roughly $600 to remove (or sequester) 1 tonne of C02. In other words, NVIDIA's estimated $500 would be good enough to sequester 830 KGs per month. Now here is where NVIDIA gives users a choice, the heater will have two options: Carbon Zero and Carbon Negative.

In Carbon Zero mode, roughly 17% of the total proceeds will go to a corporation that will use that to sequester your entire CO2 contribution from the air. You can pocket the rest in an embedded cryptocurrency hardware wallet. In Carbon Negativity, you can set how much more you want to contribute to carbon removal - all the way up to 100%. 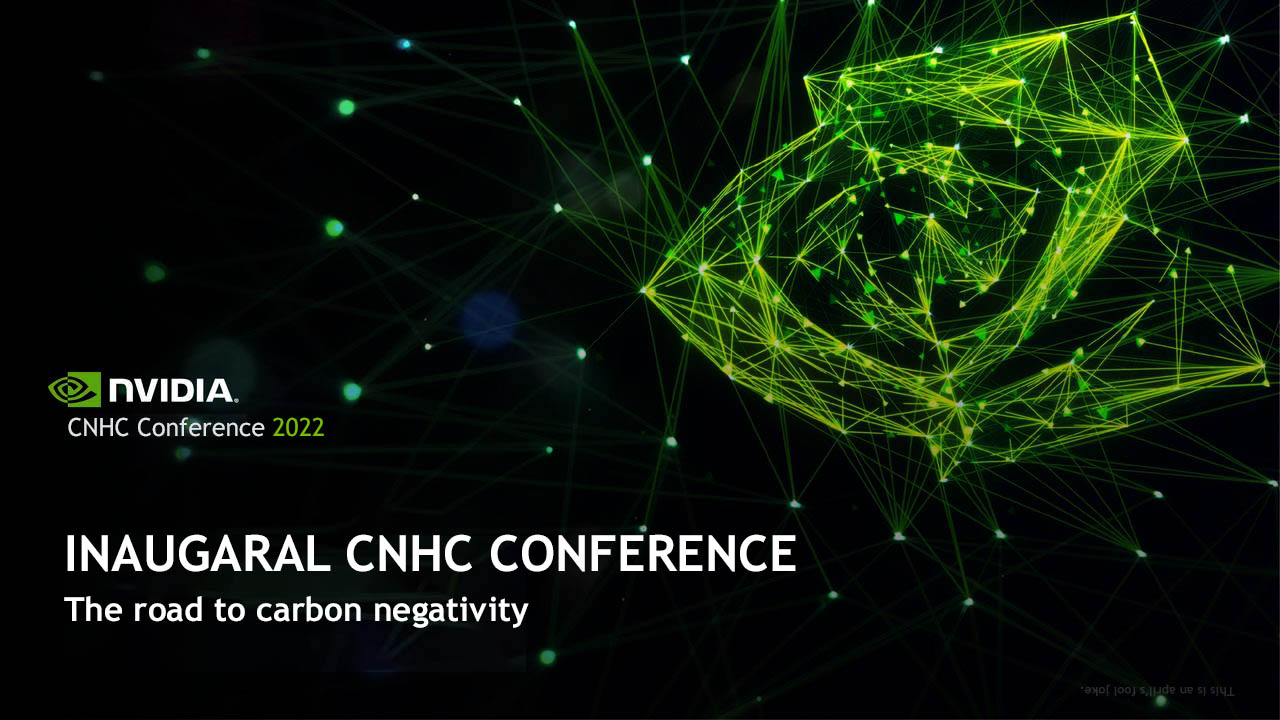 NVIDIA's HEATFORCE Mark I is powered by not one but two Ada Lovelace GPUs. These GPUs have been specialized for cryptocurrency mining and will not have any display ports and also rock a very high clock rate. We are looking at close to 500 MH/s of cryptocurrency production at roughly 1400W consumed. The company has also bundled a 1500W solid state PSU with the space heater. As far as heating performance goes, the HEATFORCE Mark I is capable of quickly heating up rooms 17x17 meters in size. It is also equipped with a medical grade HEPA filter that will remove up to 99.99% viruses, bacteria and allergens from the air.

The "smart" features of the device are powered by NVIDIA's next-generation Grace SoC. It features Wifi 8 connectivity for uninterrupted pool-mining support and has an automatic temperature regulator (which is naturally a crypto hash rate regulator). It also contains PM2.5 and humidity sensors to calculate the US AQI of your room in real time. While we don't know the pricing yet, this is an incredibly good idea and hits a lot of points in one go. Not only are you getting a heating device which is actually using the energy before wasting it as heat, but you can actually contribute to removing CO2 from the environment. The medical-grade HEPA filter also means that you need to worry less about any pathogens or irritants in the air.