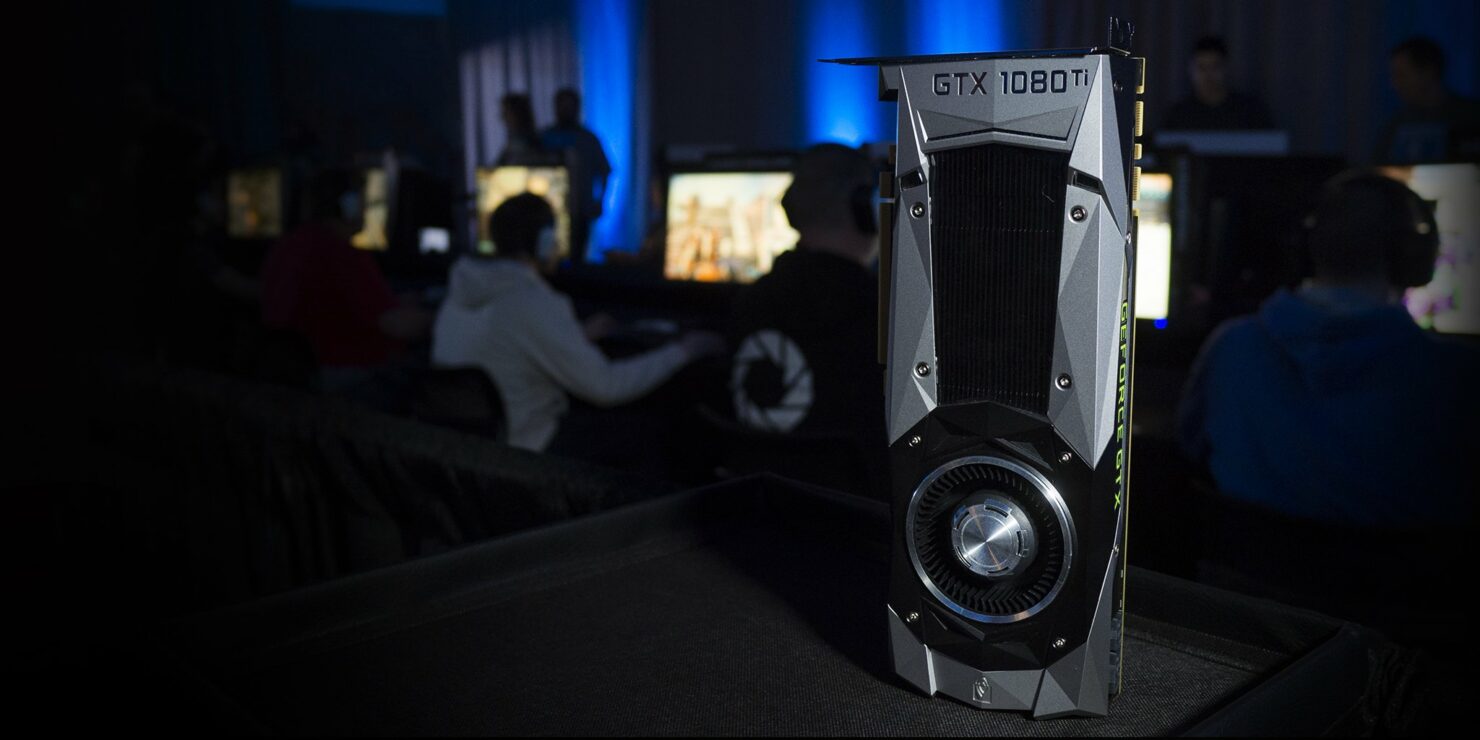 The discrete GPU market share results for the first quarter of 2017 are in and looks like NVIDIA did really well compared to their competitor. Despite a decrease in add-in board market due to market shifting, the green team managed to increase their dGPU share.

Discrete GPU Market Down By 29.8% - NVIDIA Still Manages to Increase dGPU (Add-in Board) Share By 2%

It's reported by Jon Peddie Research that during Q1 2017, the graphics board shipments decreased by 29.8% (Q/Q) and 19.2% (Y/Y). During Q4 2016, the graphics board shipments had increased by a factor of 5.6%. It is reported in a chart that the decline is systematic and the market usually makes a rebound in Q3 of each year. So it is suggested that we can see further decline in Q2 2017 but not as big as this quarter. There are also several factors involved but before that, let's talk about share of each major GPU supplier in this market.

The attach rate of AIBs to desktop PCs has declined from a high of 63% in Q1 2008 to 42% this quarter, a decrease of 9.0% from last quarter which was negative. Compared to this quarter last year it decreased 12.9% which was negative. The overall GPU shipments (integrated and discrete) is greater than desktop PC shipments due double-attach—the adding of a second (or third) AIB to a system with integrated processor graphics—and to a lesser extent, dual AIBs in performance desktop machines using either AMD’s Crossfire or Nvidia’s SLI technology improved attach rate. via JPR 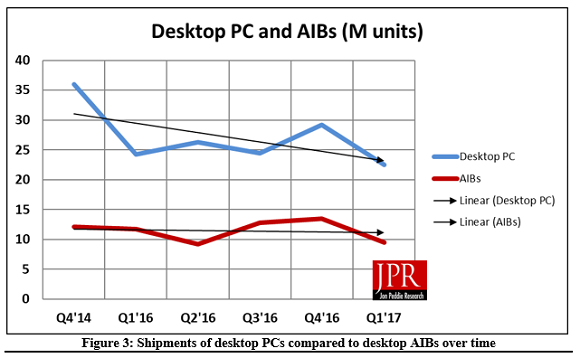 First up we have NVIDIA which saw a market share increase of 2%. This brings NVIDIA dGPU share to 72.5% which is their highest in several months. NVIDIA's dGPU market share stood at 70.5% in the previous quarter but has managed to grow further despite a decline in the overall market. The reason is simply because of NVIDIA's high-end offerings which are detailed in the segment divided market share. NVIDIA saw an overall decline of -27.8% in the discrete GPU market with -23.0% in the notebook and -25.6% in overall PC graphics shipments. 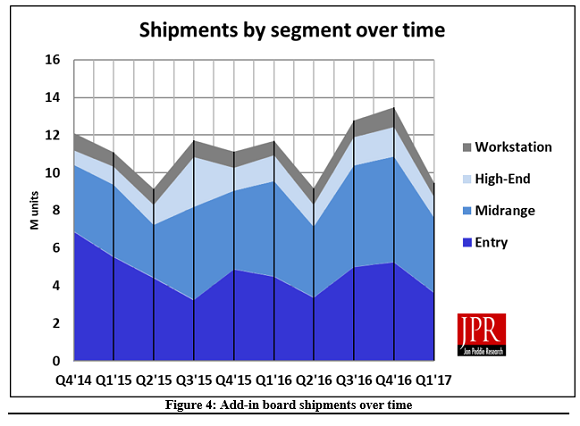 In the segmented market shipments chart, it is shown that the entry level and mid-range markets gave a major blow to the discrete GPU market. They fell by a lot while the high-end, enthusiast and workstation market kept strong. NVIDIA added a range of high-end solutions to their portfolio last quarter with the GTX 1080 Ti winning the Best GPU of the Year award. The Titan Xp stands mighty with it's flagship graphics performance and NVIDIA also offers very fast workstation based graphics cards to consumers.

AMD on the other hand launched Radeon RX 500 series in April of 2017 so their share is yet to be taken into account. The Radeon RX 500 improved upon the Polaris based RX 400 series with higher clock speeds and some power management updates. It looks like we will be looking at better dGPU market results in the upcoming quarters as both AMD and NVIDIA are preparing high-performance solutions based on their Vega and Volta architectures.