Will Nvidia Accept AMD’s Challenge to prove whether Geforce GTX 590 is the “worlds fastest graphics card”? 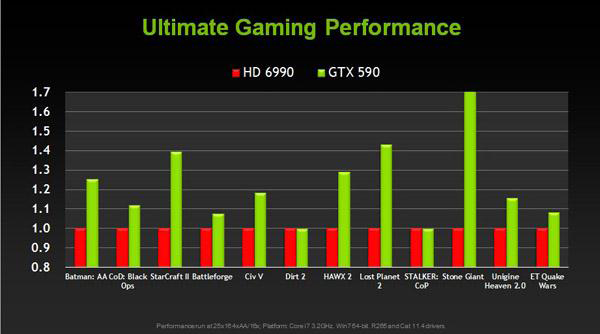 AMD has challenged Nvidia in an one to one battle to prove whether their recently released "Geforce GTX 590" Dual Chip card is the worlds fastest graphic card. This challenge comes a while after Nvidia released their dual GF-110 Based GTX 590 which would rival up against the AMD's HD 6990 Dual Cayman Chip based card.

Both companies claim their card to be the worlds fastest but who's speaking the truth? AMD made it easy for that to figure out by challenging them to prove if the GTX 590 is actually the fastest GPU on earth. You can check the blog post below, Go to official link here.

Yesterday our competitor also issued a press release, announcing the launch of what they claim to be the “World’s Fastest Graphics Card”– the Nvidia GTX 590. We combed through their announcement to understand how it was that such a claim could be made and why there was no substantiation based on industry-standard benchmarks, similar to what AMD did with industry benchmark 3DMark 11, the latest DirectX® 11 benchmark from FutureMark.

So now I issue a challenge to our competitor: prove it, don’t just say it. Show us the substantiation. Because as it stands today, leading reviewers agree with us here, here, here, and here that the AMD Radeon HD 6990 sits on the top as the world’s fastest graphics card.

AMD wants Nvidia to prove it and not just claim their card to be the fastest one released yet. However you can check out reviews here which show that the card is a mere 4% faster on 1920x1080/1200 res and the performance falls when res is increased, I take 1080P as the standard of these two graphic card because a lower res won't show the actual performance of the card and they're pretty useless then and only meant for extreme res.

Nvidia's GTX 590 has also been Plagued with an exploding issue on its release which was later found out to be voltage issues and was sorted out by the newly released drivers which you can get here.

I would love to hear Nvidia's response to AMD on this, Expect an official statement by Nvidia on this within the week.