Scientists in Germany have announced that they have successfully fired up one of the world’s largest nuclear fusion machines. The machine was able to create a special super-hot gas which the scientists hope will lead to an unlimited supply of clean energy through nuclear fusion. Scientists are just amazing at what they do, and I say this without any bias that if they do eventually make this work in the longer run it would one of the most beneficial things known to mankind. 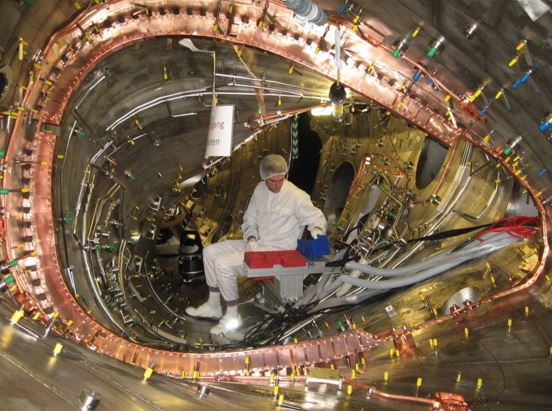 The world just took a huge step towards clean energy through fusion!

The machine was able to hold a super-hot blob of helium plasma – which is a cloud of loosely charged particles – lasted only about one tenth of a second and it was around a million degrees Celsius in temperature. The machine is called Wendelstein 7-X or W7-X for those of you who find that word difficult like me and it is 16 meters in width. This is a breakthrough in the field of nuclear fusion as the Sun’s energy is created by fusion and scientists have been trying to replicate that for ages. The machine is a type of nuclear fusion device called a stellarator.

Scientists have been talking about the potential use of stellarators for decades now, but this might be the first time a team has shown something of this sort. Physicists have been racing to create fusion devices that create energy as abundant as the Sun without using nuclear fission (as it creates a large volume of toxic waste) and this time they’ve struck gold with this device.

The Max Planck Institute for Plasma Physics tweeted these images of its stellarators new plasma for the first time on 10th December,

Nuclear fusion occurs as a result of atoms being fused together at really high temperatures (Sun’s energy is created by fusion) and they generate energy. Scientists are really looking forward to this because this has the potential to create an almost unlimited supple of energy by using little more than salt water, almost replicating the process that has been fueling our Sun for the past 4.5 billion years.

The whole process has been a little tricky and it hadn’t been achieved as of yet because it required scientists to construct a device that could produce and control a blob of helium plasma at a temperature of 100 million degrees Celsius. The way to control the plasma is through the use of superconducting magnets, as that’s something that scientists have already built in doughnut shaped fusion reactors known as tokamaks. But there’s a huge problem with these kind of reactors, they don’t contain the plasma long enough to get any energy out of it. The can sustain the plasma for only six a half minutes which means that the whole process consumed more energy than it generated making it a failure. 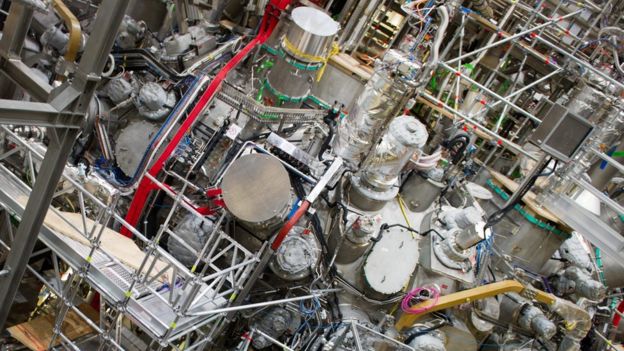 The vacuum chamber with a complex system of magnets

This is where the stellarator comes into action, because if all goes according to plan then the stellarator will be able to maintain the plasma for about 30 minutes which is significantly better. This will also create more energy than it consumes making the whole project a success and giving us clean energy in return. In its trial run the machine was filled with the unreactive noble gas helium and was heated using a laser to 1 million degrees Celsius. The machine held the plasma for about one tenth of a second which isn’t anywhere near the 30 minutes but it was enough to get the scientists right on track.

"We’re very satisfied," said Hans-Stephan Bosch, who led the team. "Everything went according to plan."

If this all works as planned, and I sincerely hope it does, then the whole reliance on non renewable energy resources such as fossil fuels would almost be close to zero and everyone would be using clean energy. This process will be obviously slow but it will be for the better.

The next step will obviously be to make amends to machine so that it will be able to reach the 30 minute mark that it is predicted to achieve. Strictly speaking this was a kind of a trial machine, the W7-X, and if all goes to plan then this will help future generations of stellarators reach their goal. In January scientists will start trying to produce plasma from hydrogen; we’ll keep you updated on that till then let us know your feelings about this in the comments below.