Phablets are relatively a newer breed of smartphones popularized mostly by Samsung's Note. The Galaxy Note series is the major force in phablet sales, this post covers the Galaxy note 3 and a worthy competitor by Nokia, the Nokia Lumia 1520.

Both the Note 3 and the Lumia 1520 are made of plastic, however the Lumia's construction looks and  feels slightly superior. The Note 3 is slimmer ( 8.3 vs 8.7mm), lighter ( 168 vs 209g) than the Lumia.The Note 3 has a smaller footprint owing to its slightly smaller screen size. Both the smartphones have impeccable screens, the Note 3 sporting a Super AMOLED unit while the Lumia 1520 does away with a simple IPS based screen. The resolution on both the phablets is the same, Full HD (1920 x 1080). Lumia has the upper hand in screen size (6 vs 5.7') although this results in a slightly lower ppi ( 367 vs 386). The Note 3 and the Lumia 1520 both utilize the same chipset, the Snapdragon 800. With four cores of the Krait 400 and the powerful Adreno 330, there is simply no absence of power on either device. The Note 3 has another version which houses the Exynos 5 Octa, much like the Galaxy S4 however the performance difference is not much to be cried over.

The Note 3 has 3 variants carrying 16/32/64 GB storage memory while the Lumia has a 32 GB storage built-in. Both the devices offer every form of radio's there are, the Note 3 adds some exclusive features like an IR blaster and a Tv out via MHL.

The main difference is the OS running on both devices, while the Note uses the Android 4.3 with 'TouchWiz' modifications the Lumia runs the Windows Phone 8. Live tiles is an awesome feature on WP, u get notifications via the tiles on the homescreen. The number of applications will obviously be more on the Note 3 however the windows phone app store is catching up albeit slowly. 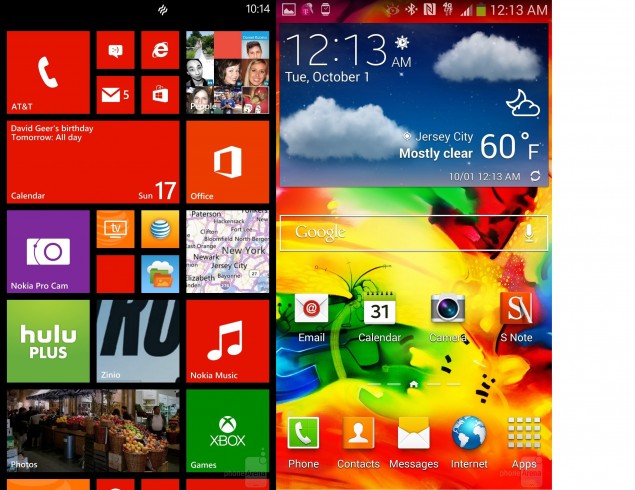 The Camera Hardware tilt the odds on Lumia's favor, a 1/2.5' sensor with a bright f2.4 lens. On the other hand the Note 3 allows a game-changing 4k video recording.

Both the cameras managed good photos, the picture by the Lumia looks better 'toned'.

Low light photography is where the Lumia 1520 shines, with optical image stabilization helping it to cancel out blurriness and allowing for a longer exposure time. The image the Lumia 1520 priduces is usable and the amount of detail when considering the low lighting is also acceptable. The abysmal performance of the Note 3 is evident here.

The video recording is Note 3's forte. With high resolution (4k) recording  by the Note 3 the Lumia 1520 does not stand a chance. Even when considering 1080p videos, the Note 3 has sharpened and more detailed videos.The 3400 mAh battery in the Lumia 1520 is 200 mAh bigger than the Note 3. Also the WP ecosystem requires slightly less battery thus the battery lasting slightly longer on the Lumia 1520.