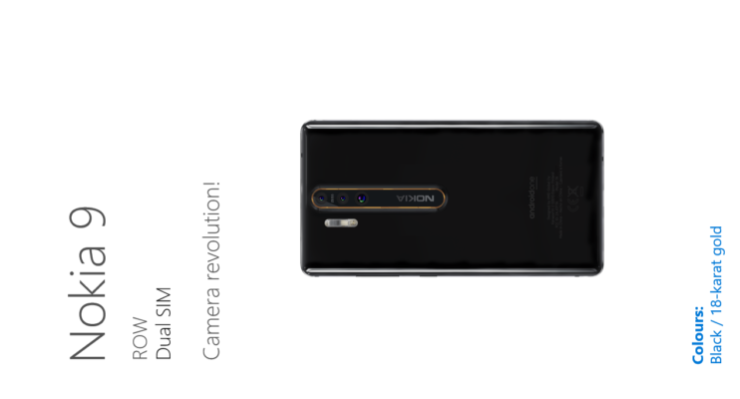 After a brief pause, the Nokia 9 is once again a part of the rumor mill. HMD Global's acquisition of the iconic Finnish brand created shock-waves in the smartphone world. The success of its mid-rangers in China propelled the company at the forefront of the industry last year - for a short time period.

The company capitalized on this new-found fame by launching a succession of smartphones. It also rebooted the much loved Nokia 3310. However, despite all this, Nokia and HMD failed to make an impact on the flagship smartphone market; still dominated by the likes of Apple, Samsung and Google. Will this change in 2018? We've got a fresh leak today with more details to add clarity.

Today's news for the Nokia 9 follows a long list of leaks and rumors - the majority of which took place last year. News for the smartphone claimed that it will feature Qualcomm's Snapdragon 835, Qualcomm's flagship processor for 2017. It also promised impressive rear camera specifications. However, the Nokia 9 failed to impress as a complete package on the rumor mill and HMD decided to end things after launching the Nokia 8.

Now after launching the Nokia 7 Plus at the MWC, we'll finally see a true flagship from the company's end. The Nokia 9 is back on the rumor mill today, with upgraded specifications. This year, Chinese manufacturers dominate the flagship landscape. We've seen impressive launches from Xiaomi, Vivo and Huawei. All three companies bring new features to the market - with Huawei's triple camera setup directly relevant to this leak. 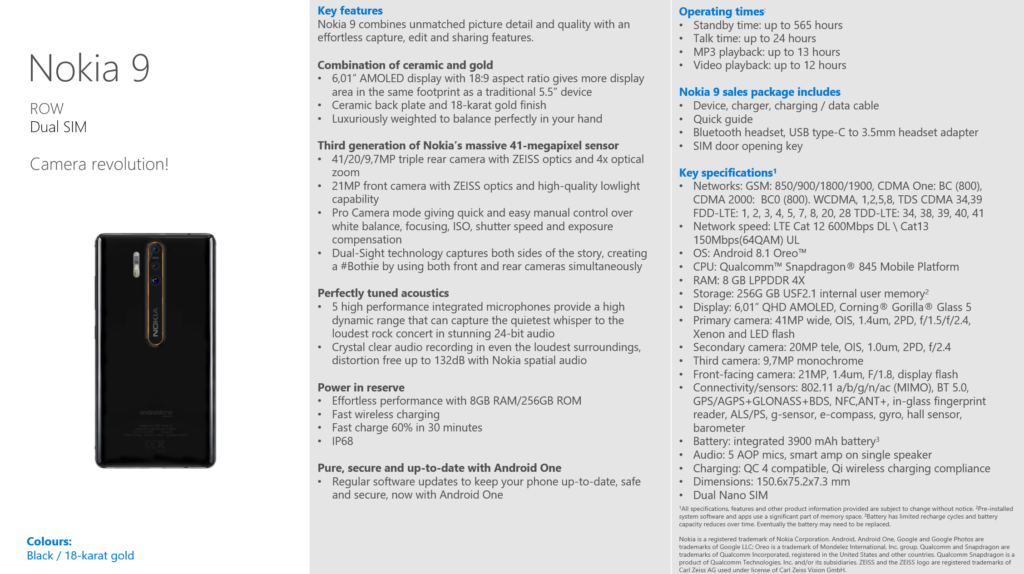 Today we've got a detailed Nokia 9 leak with a lot of specifications. It promises a 6.01" QHD AMOLED display, with a 18:9 aspect ratio. The device will also match Huawei's triple camera setup, as the Nokia 9 is listed with three different primary camera lenses. These are of 41MP, 2!MP and 9.7MP resolutions. The first two sensors are color coded, while the last one is for monochrome output. Even more impressive is the 8GB of RAM for the device allegedly powered by Qualcomm's Snapdragon 845.

All in all, if today's leak is accurate then users will have another excellent flagship smartphone to choose from. Nokia launched the 7 Plus with a 18:9 IPS LCD display panel. As the Nokia 9 brings AMOLED and fantastic specifications on board, looks like HMD global is finally ready to compete with the giants. Of course, given the track record of leaks related to the Nokia 9, it's wise to take all of this with a hefty grain of salt. Thoughts? Let us know what you think in the comments section below and stay tuned. We'll keep you updated on the latest.