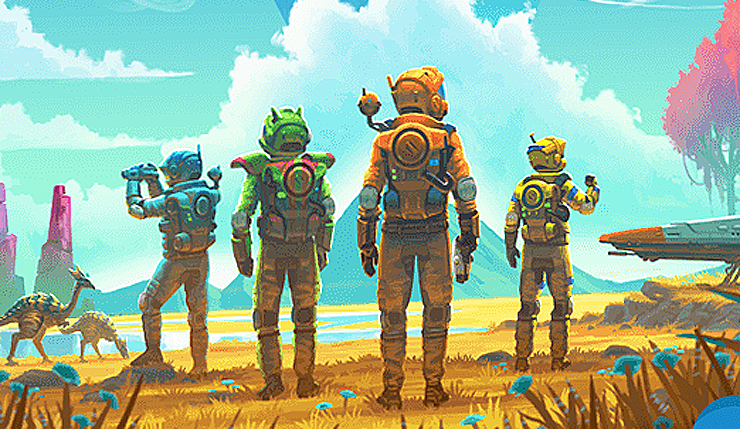 As revealed back in March, procedurally-generated space exploration game No Man's Sky is finally coming to Xbox One sometime this summer, and it seems the port will be arriving alongside a pretty exciting new feature. No Man's Sky mega fan Peaceful Gamer posted this official Xbox One box art to Twitter.

Nice stuff! But wait – why are there four explorers on the front of the box? The Xbox One version of No Man's Sky will be launching alongside the big NEXT update, which developer Hello Games promises will be an “important next step” in the game’s development. Will the update add full-fledged multiplayer to the game? It sure seems like it! But hey, don’t take my word for it – No Man's Sky focused YouTuber Robotboy did a full analysis of the cover. You’d be surprised how much meaning can be wrung out of one piece of box art!

Multiplayer has long been a contentious issue for No Man's Sky. Prior to release, Hello Games strongly hinted intrepid explorers would be able to meet and interact in No Man's Sky's massive randomly-generated galaxy, but the feature wasn’t available at launch. Eventually, Hello Games did add the ability to meet other players, but these interactions remained very limited – other players were represented as simple glowing orbs, and, aside from being able to chat, there wasn’t much players could do with one another. Perhaps that’s finally about to change!

There isn’t a set date for the Xbox One version of No Man's Sky or the NEXT update (which is also coming to the PC and PS4 versions of the game), but a recent Amazon leak pointed toward a June 29 release.

Interested in giving No Man's Sky a try now that it’s coming to Xbox One and possibly getting real multiplayer? For those who already gave the game a go on PC or PS4, would you be willing to give it another shot?