The Nintendo Switch will be powered by a Quad Core ARM Cortex A57 CPU and its GPU will be based on NVIDIA’s second generation Maxwell architecture with 256 CUDA cores.

At least, that’s what can be discerned from leaked Nintendo Switch developer documents that have surfaced online. The documents were spotted by an eagle-eyed Reddit user and later found their way to the NEOGAF forums. Apparently, several developers and insiders have stated that the leaked information is legit.

The leaked files can be downloaded from filedropper down below:

Back in December we already covered a report from VentureBeat which suggested that Nintendo’s upcoming new platform would be powered by NVIDIA’s last generation Maxwell architecture, instead of NVIDIA’s new Pascal technology. While not officially confirmed, the development documents that have now leaked, suggest that VentureBeat’s report was correct, and that the Switch will indeed be powered by a second generation Maxwell GPU with 256 CUDA Cores and one teraflop of processing power. If you want to read more about this chip, we suggest you read this post right here.

Down below you’ll find the Switch’s hardware specifications as found in the leaked developer documents: 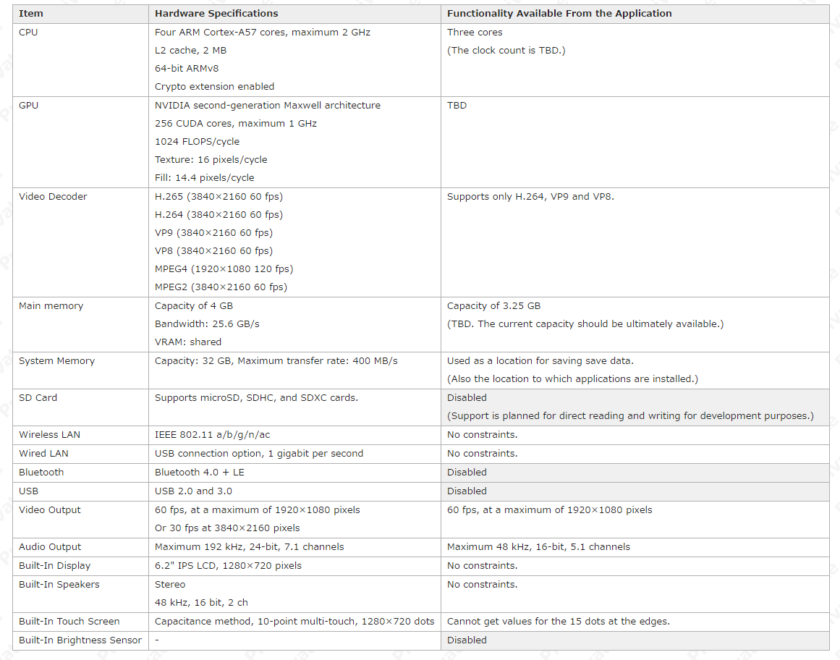 We highly suggest you read the full NEOGAF post for more interesting tidbits from the developer documents, including system and network features.

The Nintendo Switch will launch globally next month on March 3.