Well known insider Rogers claims that these reports won’t come from Nintendo fan sites, but from “major sites”. She adds that while she doesn’t know the price of the upcoming Nintendo NX, it does “sounds” expensive.

Some months ago, Rogers debunked some of the Nintendo NX rumors that claimed that Nintendo’s new console would be using the X86 architecture, and an AMD GPU. Rogers stated that, although the NX’s specs will be good,  the claimed GPU and power level isn’t correct.

Here is what multiple sources close to Nintendo are telling me about 10k’s hardware rumors: The gimmick is made up. GPU is wrong. Power level is wrong.” “The specs on NX are good, but a lot of the information being shared in this thread is incorrect.

I was told that NX has good specs, but the info in this thread on the GPU and power level is just not correct. Sorry to burst everyone’s hype. 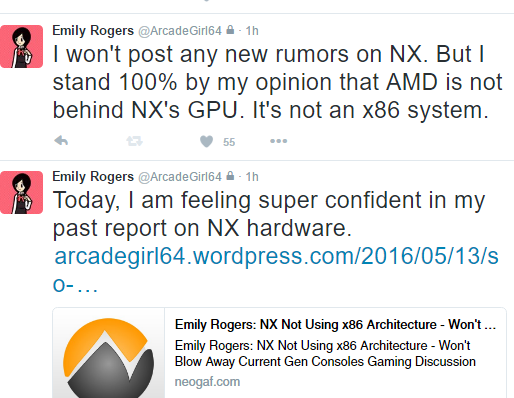 Do you think Rogers is correct. Will the NX be using a NVIDIA GPU instead? Leave comment down below.