Nikola Corporation (NASDAQ:NKLA), the company that is championing electric trucks powered by batteries as well as hydrogen fuel cells, engaged in an epic promotional blitz over the past few weeks in order to generate sufficient hype for its Badger electric pickup truck. Now, as the reservations for the Badger officially commence today, analysts will eagerly weigh initial interest in order to formulate a prognostication regarding Nikola’s prospects.

According to the details revealed by Nikola Corporation, the reservations for the Badger electric pickup truck will officially commence at 11 a.m. ET on the 29th of June. In the runup to this milestone, the company has unveiled a number of packages in order to entice prospective customers. 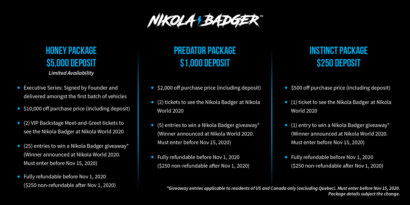 The company has also introduced two packages – Nikola WAV and Nikola NZT – that allow the opportunity to win the free giveaways of its powersports-focused products. As a refresher, Nikola WAV is an electric watercraft that resembles a sportbike. On the other hand, the Nikola NZT is a 590 HP off-road EV speedster.

Here's a look at the #NikolaWAV and #NikolaNZT packages that will be available on June 29th at 11 am ET with a chance to win either a WAV or NZT, plus you'll automatically get ticket(s) to #NikolaWorld2020! pic.twitter.com/bkn6jmc3I6

Of course, today’s star attraction remains the Badger electric pickup truck. While the Badger will be officially unveiled during the Nikola World 2020, the company has released its detailed specs in the runup to the commencement of the reservations. 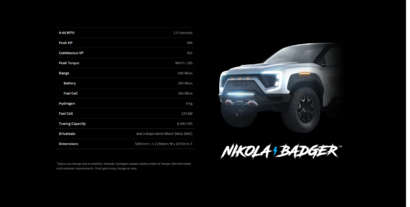 Also, as per the tweet by Trevor Milton, the CEO of Nikola Motors, the amount paid to reserve the Badger EV is refundable except the $250 earmarked for the Nikola World 2020:

All reservations are 100% refundable without penalty all the way up until the vehicle enters the assembly line. The only part that is not refundable is $250 if you attend Nikola world as that is the cost to host the event.

Should the Badger manage to garner healthy reservations, it can enhance the already-frothing sentiment around the Nikola shares. Since the 3rd of June, when Nikola Motors merged with the Special Purpose Acquisition Company VectoIQ, becoming its fully-owned subsidiary in the process, the re-branded NKLA shares have registered cumulative gains of over 87 percent, based on the stock’s closing price of $63.55 on Friday.

This unbridled enthusiasm in Nikola shares has not gone unnoticed in the halls of Wall Street. In the clearest sign of a budding institutional interest in the company, J.P. Morgan initiated its coverage of Nikola with a ‘Neutral’ rating on the 22nd of June. Even though the Wall Street behemoth acknowledged an “elevated” near-term pullback risk, it was much more sanguine on a longer time horizon. According to J.P. Morgan, Nikola can earn around $14 billion in revenue and between $1.5 billion and $2.0 billion in EBITDA by 2027.

The likelihood of an incoming barrage of insider selling remains a key risk for Nikola investors, at least in the short-term. As an illustration, the company disclosed on the 15th of June that it may issue 23.89 million additional common shares upon the exercise of pertinent warrants. Bear in mind that this development relates to the warrants that Nikola issued as part of its old arrangement with VectoIQ. Additionally, 53.39 million NKLA common shares along with 890,000 private warrants may also be liquidated by “selling security holders”. These shares relate to Nikola’s ‘Private Investment in Public Equity’ or PIPE arrangement whereby private investors – including Fidelity Investments, P. Schoenfeld Asset Management, etc. – will infuse cash of around $700 million in the company and receive NKLA shares at a discount. For obvious reasons, this incoming barrage of insider selling will continue to act as a dampener for Nikola shares in the near-term.

Nonetheless, Nikola bulls are already looking toward the company’s next milestone, currently slated for the 23rd of July, when Nikola will break ground in Coolidge, Arizona for the construction of a factory with the capacity to produce 35,000 trucks per year.

Nikola factory is breaking ground July 23rd in Coolidge, AZ as promised! 35,000 trucks a year will be built out of Coolidge bringing billions of dollars to Arizona's economy and thousands of new jobs.

Bear in mind that Nikola is already building prototypes for its electric commercial trucks at a facility in Ulm, Germany, in partnership with CNH Industrial. This German facility also has the capacity to produce 35,000 trucks per annum. Once the Arizona factory comes online, the company will have a cumulative production capacity of 70,000 trucks per year. The BEV version of these trucks will be available for delivery in the second half of 2021. The hydrogen fuel cell version, however, will only be available toward the end of 2022.