Android 5.1 has been here for some time now, with Google having launched the upgrade alongside Apple's iOS 8.2 earlier this month. When it comes to the Android world however, an update release doesn't necessarily translate to your device being updated at the same time. So while Android 5.1 is out here, many devices are yet to see an upgrade. But not the Nexus 10, as Google's stock Android device has received the update. 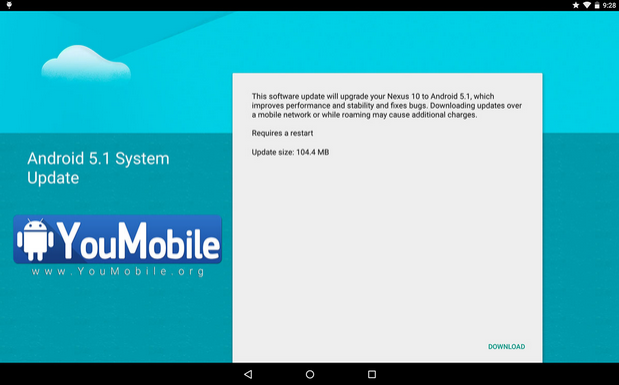 The Nexus 10 seems to be Google's favored gadget for Android's most recent update. After the software giant first released file images for the software on the Nexus 10, the device has now started to receive Android 5.1 updates over the air, as can be seen in the image above. Whats good to hear is that the update for Nexus 10 will be weighing in at a light 104 MB, so it really shouldn't take a lot of time if you choose to upgrade your slate to Google's latest.

Android 5.1 will also bring several bug fixes, performance improvements and add on to the features that Google initiated with Lollipop's massive upgrade last year. Material Design is expected to be refined further, giving it a more simplistic and minimal touch. In addition to this, its also expected to further improve performance on devices and further speed your device up particularly with 64 bit chipsets. So all Nexus 10 users out there should stay sharp, as Google's over the air update for your device should be coming soon. So if you're looking to update as soon as possible, make sure you have a Wi-Fi connection at hand and keep checking your device's update section. And let us know if Android 5.1 changes anything for you in the comments section. Cheers.