It's time we talk about this gorgeous beauty once again! At least it seems to be the time when the CEO himself shares such intriguing snaps of the upcoming wonders. Moto 360 was definitely the first among the wearable lot to be equally stylish and feature-full. The device had almost everything a person would want from a smartwatch but many of consumers waited for the next gen Moto 360 as it was promised to be even better. The major flaw (or absence of a choice) was the availability of a single size. The circular dial proved to be big for many wrists and we were promised that we will soon see the new Moto in varied sizes and shapes.

Lenovo's CEO Yang Yuanqing posted a photo of a case full of multiple watches, dials and metallic bands. The style seems to have been carried forward to the upcoming Moto 360 but with added customization to please everyone. We can spot two different sizes of dial with the larger one possibly of the same size as the current Moto 360. You will like the smaller Moto 360 if you felt the current one looks huge on your wrist. 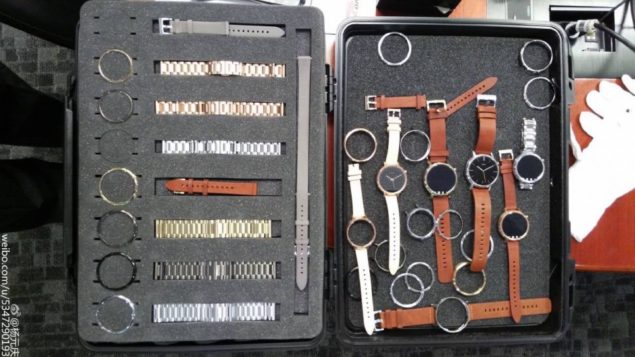 We can also notice that the design is a little different as you have now to attach the straps with the lugs on both the sides of the watch face. This looks more traditional and possibly allowing you to get your own third-party straps too. In the current gen Moto 360, the strap goes underneath the body. Different sizes and colors of the straps and watch faces are also shown in this photo. Various shades of gold, silver, brown, grey, and black are going to be available to customize your watch in either leather or metal.

Looking like a treasure trove, it is quite understandable why the post was deleted soon afterwards. The quote running along the photo said, [translated] "Moto 360, matching the arrival of the era of freedom, in the future we want to increase the store features a watch shop."

Let's hope to see some more next gen Moto 360 leaks focusing on hardware packed inside this beautiful design.

Moto 360 Successor to Arrive as Early as This Winter!