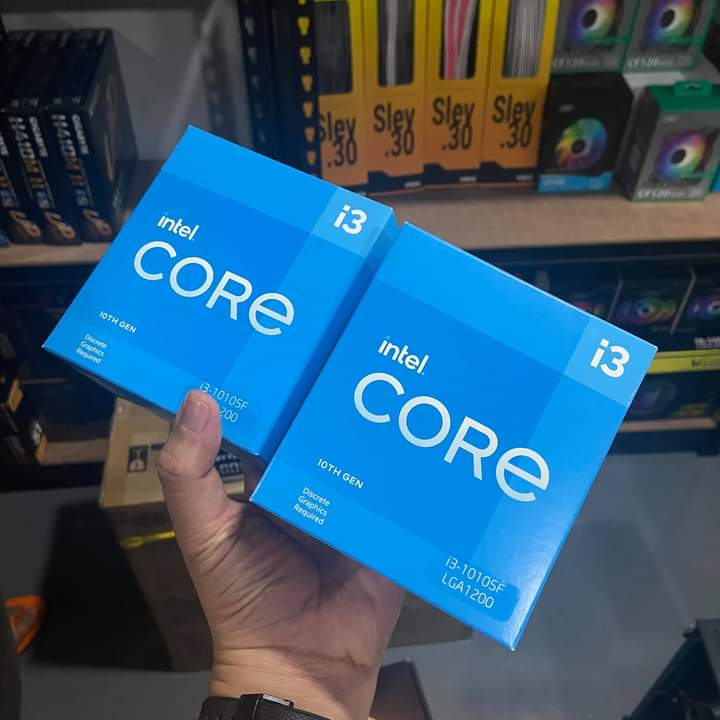 Following the leak of the Core i9-9900KS, Intel has had another product surface early. This time, what looks to be two Core i3-10105F CPUs have been spotted in Malaysia. This processor is the Core i3 Comet Lake refresh CPUs and the first thing that catches the eyes of many people isn't the fact that it's a new product, but actually the packaging. These CPUs are expected to launch alongside the 11th Gen Rocket Lake CPUs.

Everyone knows that Intel has a distinct design philosophy behind their packaging which normally is the processor in big letters with a gradient effect and then the box featuring an assortment of darker blues and a few purples as the main color. The i9 packaging features a plastic viewing port whilst the others are normal boxes. Sometimes Intel has shaken it up and had the box as a dodecahedron, but has shied away from it as it is wasteful

Now, Intel has a new logo which means new packaging. The new packaging is mostly a light blue with different shades filling different boxes and the word "CORE" is front and center. The package has less color and a simpler design. It is quite the departure from the packaging we've seen from Intel in previous years, but a breath of fresh air.

The specifications of the Core i3-10105F are modest being an i3 processor. It has 4 cores and 8 threads with a 3.7 GHz frequency. It is unknown whether it will come with integrated graphics, but many expect Intel HD 630 or 610 graphics to be onboard. Compared to its predecessor, the Core i3-10100F, it only has a .1 GHz increase in base clock and we hope that the 10105F will feature a boost clock greater than the 4.3 GHz seen on the predecessor.