In its latest Insider show, MSI talked about its upcoming Z590, B560, & H510 motherboards which will feature support for both Intel 11th Gen & 10th Gen CPUs. MSI also demonstrated some brand new features that their B560 motherboards will offer while listing down prices for its budget 500-series lineup.

Starting with the most important details that our readers would like to know are the prices. MSI will have several B560 and H510 motherboards within its lineup, all of which will be priced in the sub-$ 200 US price range. The most expensive motherboard within the B560 lineup will be the MAG B560 Tomahawk WiFi which will retail at around $189 US while the cheapest motherboard will be the MSI H510M-A Pro, retailing at $89 US. Following is the complete list of MSI B560 and H510 boards along with their prices: 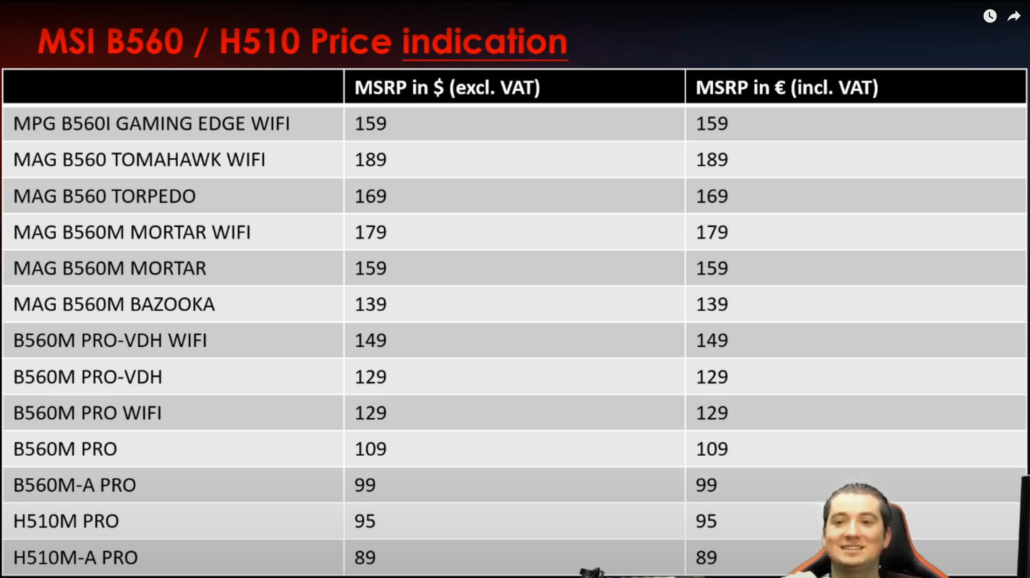 As you can tell, those are some pretty decent prices, and it's also nice that H510 offerings will be positioned in the sub-$100 US segment. MSI also confirms that B560 series motherboards will get memory overclocking support. MSI's B560 lineup will be equipped with at least 6 PCB layers that would allow them to handle high-speed memory signal transfer. The top model which is the B560I Gaming Edge WiFi will support memory overclocked speeds of up to DDR4-5200 MHz while the rest of the lineup will be able to handle speeds of up to DDR4-5066 MHz.

MSI Z590 & B560 boards will also come with a new Memory Try It! feature which offers 100 sets of settings for Samsung, Hynix, Micron, Nanya, PSC, CXMT, Spectek memory ICs with Comet Lake, and up to 500 sets with Rocket Lake CPUs. 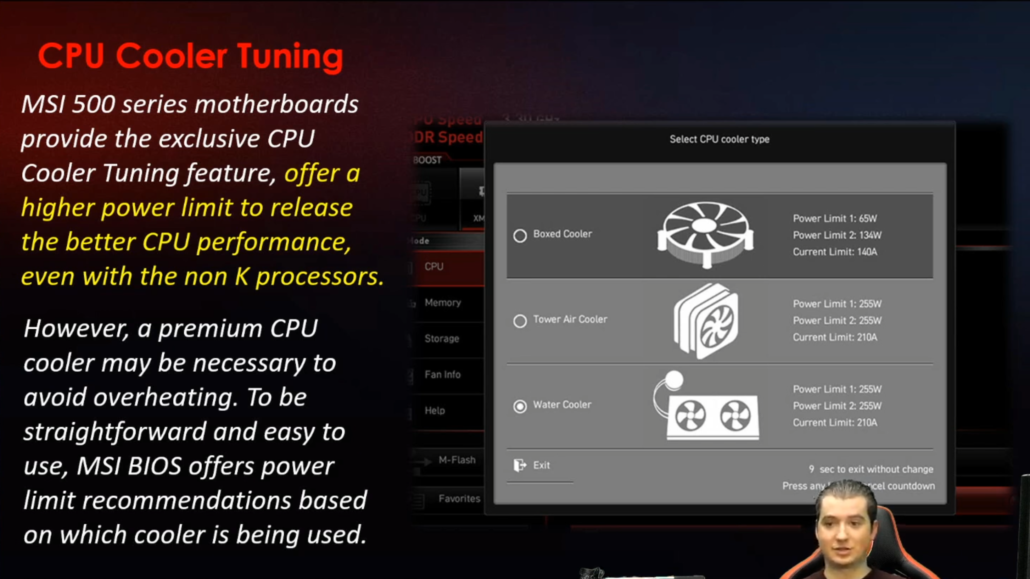 In addition to memory overclocking, MSI 500-series motherboards (Z590, B560, H510) will come with unlocked power limit support. So while you won't be able to overclock your 10th or 11th Gen Intel CPUs on B560 and H510 boards, you can get unlocked power limits which would allow you to sustain boost clocks for longer periods but at the cost of higher power draw. You can select various power limit profiles based on your cooling. The power limits go up to 255W (PL2) with a current limit of 210 Amps.

MSI also showcased its brand new Z590 Unify series motherboards which come in two standard ATX offerings, the Z590 Unify-X and Z590 Unify, and also the Mini-ITX Z590I Unify. The Z590 Unify board sticks to the RGB-Heaton design and features a 16 phase (90A) VRM which is powered by a dual 8-pin connector configuration. There are large aluminum heatsinks covering the VRMs that feature Heatpipe cooling. 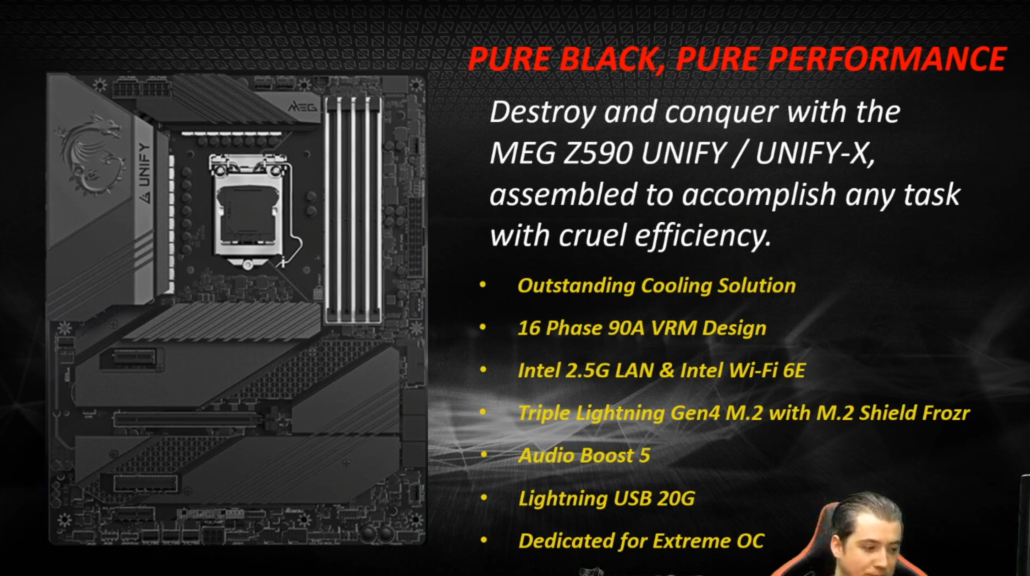 The Unify will come with four DDR4 DIMM slots while the Unify-X will come with two DDR4 DIMM slots but allow faster DIMM speeds. Features such as Intel 2.5G LAN, WiFi 6E, Triple Gen4 M.2 slot with Shield Frozr heatsinks, Audio Boost 5, Lightning USB 20G, and a design geared towards the extreme overclockers are all packed within the Unify lineup. 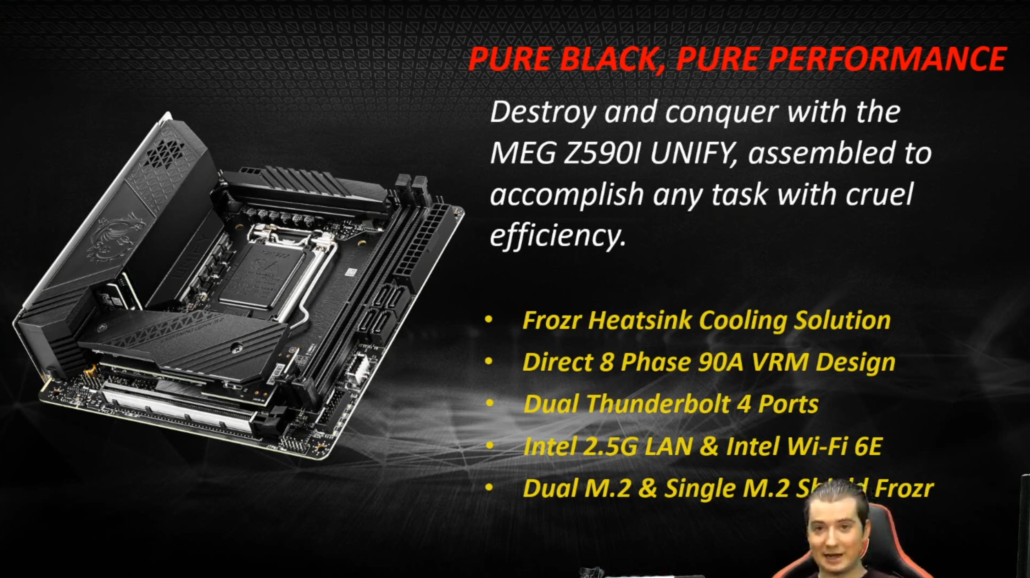 The Mini-ITX Z590I Unify comes with an 8-phase (90A) VRM design which is powered by a single 8-pin connector. It features a Frozr heatsink cooling solution with an active fan beneath the I/O plate. The motherboard comes with dual Thunderbolt 4 ports, Intel 2.5G LAN, WiFi 6E, Dual M.2 slots, one of which features an M.2 Shield Frozr heatsink, a single PCIe Gen 4.0 x16 slot, and a range of I/O ports. Expect other manufacturers to list down their respective B560 and H510 motherboard prices in the coming days.