Intel has confirmed that it won't be allowing 11th Gen Rocket Lake Desktop CPU compatibility on existing B460 & H410 chipset based motherboards. According to Intel, the CPUs will officially get support on Z490 & H470 motherboards while the more budget-oriented offerings will be left out.

On its official support page, Intel states that motherboards based on the Intel B460 & the H410 chipsets are not compatible with Intel's 11th Gen Desktop CPUs. Now Intel 11th Gen CPUs come with both Rocket Lake and Comet Lake Refresh flavors. The entry-level 400-series motherboards will retail support for 11th Gen Comet Lake Refresh CPUs which will include Celeron, Pentium, and Core i3 parts but won't be receiving support for the Rocket Lake lineup which includes Core i5, the Core i7, and Core i9 SKUs. 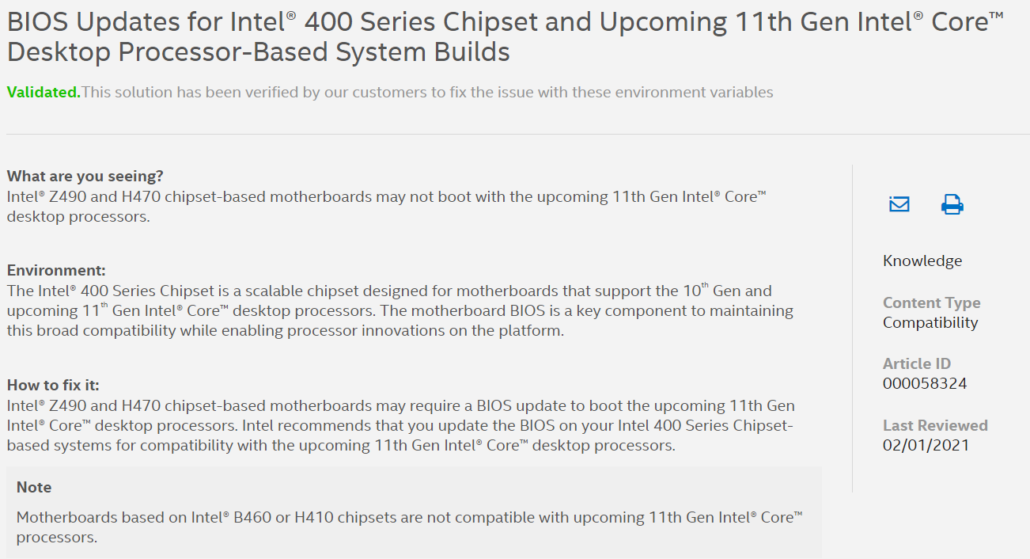 This could be done due to many reasons such as inadequate power delivery on the entry-level boards. Only the Z490 & H470 offerings are seemingly good enough to support the Rocket Lake chips. However, this doesn't mean we won't get to see some sort of unofficial Rocket Lake CPU support from board vendors. It is possible that an unofficial BIOS support will be offered which would enable Rocket Lake CPU support but without guarantees that everything will work alright and in a stable fashion.

The other reason could be Intel trying to push its 500-series platform which was introduced at CES 2021 and several motherboards are now available on retail outlets. Intel's B560 chipset also has a few key advantages over its predecessor, offering memory overclocking and more PCIe I/O (Gen 4). The H510 series boards will pack WiFi6 support along with minor firmware updates but we could expect Rocket Lake CPUs to run stably even with these entry-level designs.