The much anticipated Google Nexus 6 made it's first appearance in benchmarks just three days back. The scores that came in the device's GFXBench entry managed to shatter previous records held by other devices. The Nexus 6 managed to top the likes of Apple's iPhone 6, Samsung's Galaxy S5. LG's G3 and HTC's One M8, only to be beaten by the iPhone 6 in single core results.

These results by the device aren't surprising since it is expected to come with the Snapdragon 805 on board. Well, more Nexus 6 benchmarks have surfaced and they help us get a better look at what the device has to offer, rather than compare it's performance with other devices out there. 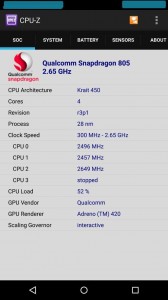 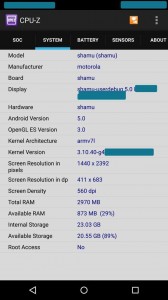 Today's Nexus 6 benchmarks come from twitter and offer greater depth into the inner workings of the device. More or less, the CPU Z screenshot posted on twitter ends up confirming what we already know about the device. As speculated previously courtesy of various leaks, Nexus 6 will be coming with a quad core 2.65 GHz Snapdragon 805 on board.

This will be backed by 3 GB of RAM. Oh and the deice will also come running Android L. In the display and graphics department, the device will come with a resolution of 2392 x 1440. All of this will be powered by the Adreno 420 GPU, which is found on board on the Snapdragon 805.

Currently, Samsung's Galaxy Note 4 series are the only devices on the market to come running on the Snapdragon 805. With the Nexus 6's 5.9 inch display, we will get to know how well the SoC fares against other devices. Other information provided on the images shows Motorola as the manufacturer of the device and Android L being mention as 5.0, something which has also been speculated earlier. The Nexus 6 looks good so far. We'll keep you updated to any new developments.