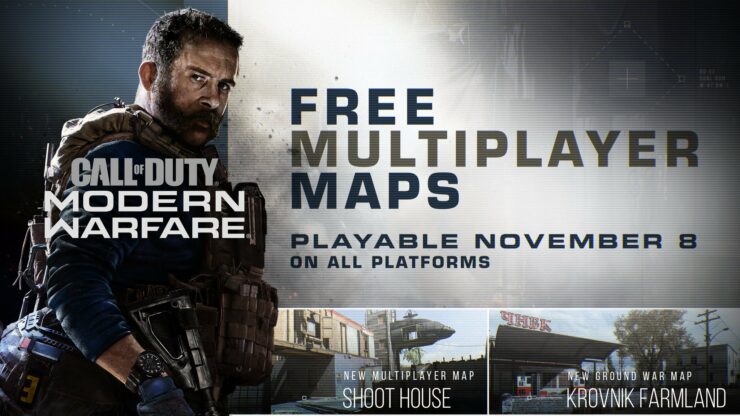 Infinity Ward and Activision have released Call of Duty: Modern Warfare update 1.07 for all platforms and we’ve got you covered with the full patch notes.

Community manager Ashton Williams announced the arrival of the game's next title update earlier this week, and the update has now been actually rolled out for PlayStation 4, Xbox One and PC. Compared to previous title updates, the 1.07 patch is quite extensive and adds new maps, a new playlist, and new Shoot House 24/7! Mode. In addition, this new update improves stability across all platforms and packs numerous fixes.

Check out the official full release notes for the update down below:

Fixed an issue where the throwing knife and Thermite weren’t causing the shield to go on the player’s back when thrown. We’ve also fixed the issue where explosive splash damage wasn’t working consistently. We’ll continue to tune the Riot Shield in future updates.

Removed the ability for enemies to hear when they’ve been called out by the opposing team. We also adjusted the enemy callouts so they are never from your Operator. Enemy callouts now use a more restricted cone at the hip and even more restricted in ADS when calculating whether or not to trigger. We’ll continue to monitor this and make additional tweaks to Battle Chatter in future updates.

Slight increase to recoil while mounting.

E.O.D. now clamps damage to a non-lethal amount, assuming the player is at full health

We’ve increased the occlusion percentage to filter footstep sounds behind geometry and adjusted the footstep volume at a distance. We have another large footstep change coming in the next update which will make crouch and ADS movement significantly quieter. Stay tuned!

Daily Challenges and Active Missions are getting a full sweep of testing and fixes. We’ll have more updates to these systems in future updates.

Pick up Intel! – In the Operations, explore Verdansk to find additional backstory information of Verdansk and the Operators.

Operation Headhunter: Fix for a bug where players are not able to lock missiles onto the final boss helicopter

Call of Duty: Modern Warfare is available globally now for PC, PS4 and Xbox One. The reboot was released last month.