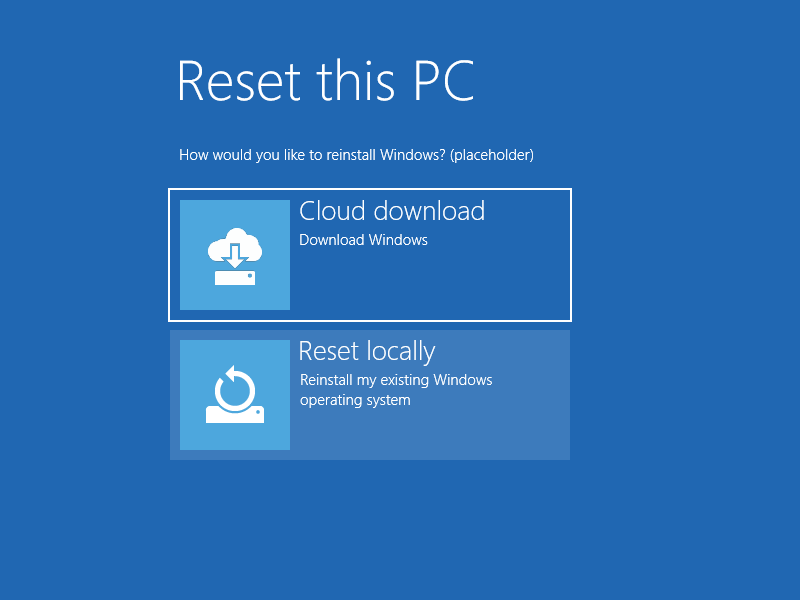 Since the release of Windows 10 in 2015, Microsoft has somehow made itself more relevant and interesting than it was in the last decade. Despite several privacy nightmares and what could only be called a broken update system, it has certainly managed to keep us hooked with its desktop operating system in an era of mobile phones and OSes. The company threw a fresh bone last week with a leaked build intended for Insiders hinting at a Windows 10 Cloud Download feature.

After this build, Microsoft clarified in an officially issued build's release notes that while "Insiders may notice some references to 'Cloud download' relating to PC reset or refresh," it isn't actually available yet. "We’ll let you know once it is, so you can try it out!," the company added.

BUT, Insiders aren't known for patience and as we hoped they have been getting into this build to see what this feature is all about. The Windows maker had itself referred to it as a feature to "reset or refresh" your computer. The new window asks users if they would like to reinstall Windows through Cloud Download or reset locally to reinstall the user's existing OS version (screenshot featured above).

@H0x0d and @thebookisclosed shared that the feature actually downloads Windows 10 Build 14393 from the Redstone 1 branch (back in 2016), which hints that Microsoft may have worked on this feature previously too. @thebookisclosed added that currently it uses the "same image source as Media Creation Tool, no cool WU/UUP tie-in."

The first build with this feature is build 14908, compiled August 16th 2016, making this almost 3 years old. Surprising to see Microsoft pick this idea back up after so long.

In response to these tweets, Microsoft's Brandon LeBlanc, however, wrote that he doesn't "think this is the new cloud recovery feature" that is coming as it "isn't working yet." He also linked to a cloud recovery option for Surface devices to suggest that what the Insiders are seeing in the build could actually be that.

While LeBlanc probably knows more about Windows than most of us, as @thebookisclosed mentions the screenshot doesn't look like the one used in Surface devices, which only shows the option of "Restart now" under the "Recover from the cloud" tab.

So far there seems to be some confusion whether what we are seeing right now is actually the new, upcoming feature or some remnant of an old one, but we are hoping Microsoft will clear things up with the release of a new build from the Windows 10 20H1 branch next week.