Understanding the Windows ecosystem is nothing less than a headache. What is Windows 10 "Redstone"; the cumulative update; the feature update; the semi-annual channel; the express update; the release branch; the Fast Ring; the Skip Ahead - it's an endless lexicon of confusing terms and their ever-changing explanations.

Being a software giant is no easy feat and with Microsoft's decision to leave the older days behind for a modern-day Windows as a Service (WaaS) model, the company has had to not only think about its end users but also governments and enterprises who depend on the company's desktop operating system, and then its OEM partners who help it distribute the OS.

Since the introduction of Windows 10 over 3 years ago, the Redmond software maker has been trying to make sense of how to streamline its process of sending updates since it will no longer release a new OS version that would require its own keys. If you have Windows 10, you will always be able to upgrade to the latest version of the OS as long as your hardware can support it.

Now, the company has announced another change to this end. Starting from February 2019, Microsoft will no longer offer with what's known as "delta updates" and completely focus on smaller-sized optimized updates that are known as "express updates." Here's what this actually means.

Windows 10 will now focus on full and express updates; no more "delta updates" starting from 2019

Microsoft has announced doing away with delta updates since express updates are like a modern version of it. Microsoft's Mike Benson explains the three updates:

Full updates have all the necessary components and files that have changed since the last feature update. We refer to this as the latest cumulative update, or LCU. It can quickly grow to a little over 1 GB in size, but typically stays that size for the lifetime of that supported version of Windows 10.

Express updates generate differential downloads for every component in the full update based on several historical bases. For example, the latest May LCU contains tcpip.sys. We will generate a differential for all tcpip.sys file changes from April to May, March to May, and from the original feature release to May. A device leveraging express updates will use network protocol to determine optimal differentials, then download only what is needed, which is typically around 150-200 MB in size each month. Ultimately, the more up to date a device is, the smaller the size of the differential download. Devices connected directly to Windows Server Update Services (WSUS), System Center Configuration Manager, or a third-party update manager that supports express updates will receive these smaller payloads.

Delta updates include only the components that changed in the most recent quality update. Delta updates will only install if a device already has the previous month’s update installed. For example, assume in May that we changed tcpip.sys and ntfs.sys, but did not change notepad.exe. A device that downloads the delta update will get the latest version of tcpip.sys and ntfs.sys, but not notepad.exe. Delta updates include the full component (not just the individual files) that changed. As a result, they are larger than express updates, often around 300-500 MB in size.

Since express updates generate differential downloads for every component, the download size is significantly reduced. 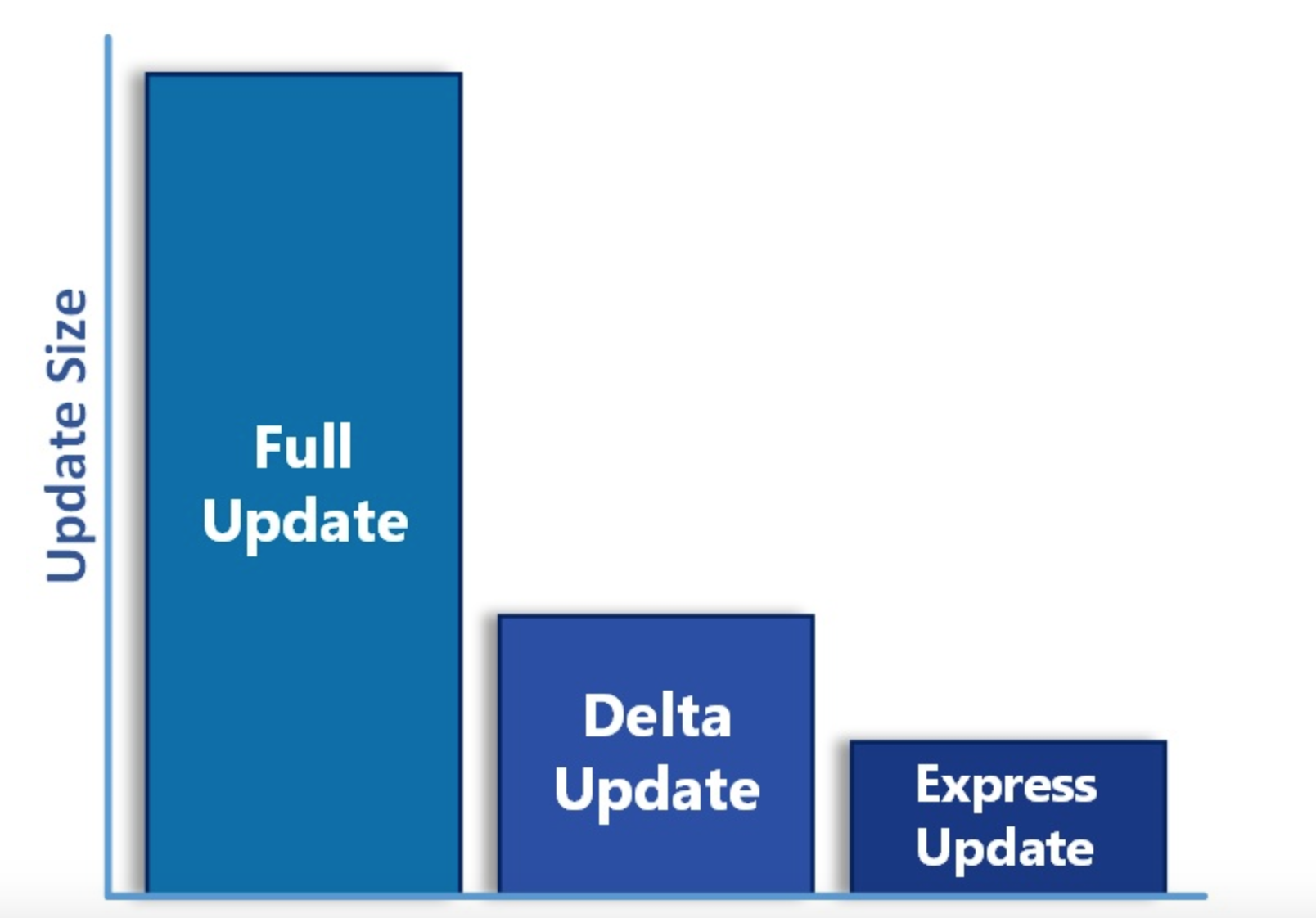 "Beginning February 12, 2019 Microsoft will end its practice of creating delta updates for all versions of Windows 10," Microsoft wrote (via ghacks). "Express updates are much smaller in size, and simplifying the cumulative options available will reduce complexity for IT administrators."