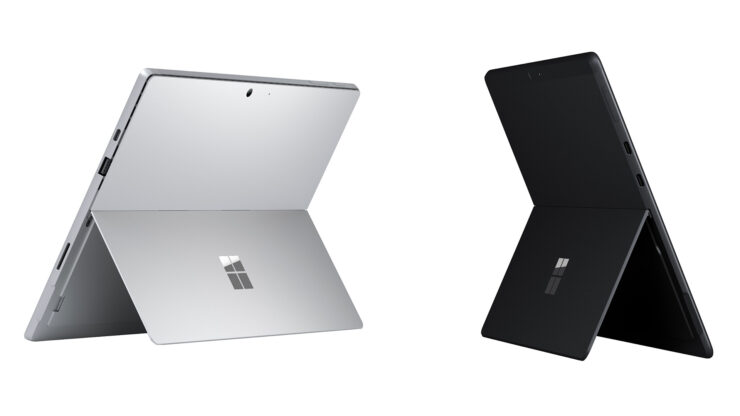 Microsoft looks to be shaking up its Surface hardware range with a wide lineup of products expected to launch tomorrow. Shortly after we reported about the 13-inch and 15-inch Surface Laptop 3 press images, we’re also greeted with a Surface Pro 7 image gallery and an ARM-powered slate that may, or may not be called the Surface 7. Whatever the latter might be referred to as, here’s a closer look at this gallery so you guys can check out the sort of changes Microsoft has made.

Turns out that the little description about the rumored ARM-powered Surface 7 featuring thinner bezels was true after all, at least according to these images shared by Evan Blass. What’s interesting to see here is the Surface Pro 7 has more bezels compared to the Surface 7, but just a single Type-C USB port. The ARM-powered tablet, on the other hand, features two USB-C ports, most likely due to its thinner shell. If you notice, you’ll also see a single Type-A USB port on the Surface Pro 7, along with what looks to be a full-sized SD card reader.

Unfortunately, just like the Surface Laptop 3 press images, one side of the Surface Pro 7 wasn’t shown in the gallery, meaning the new and improved machine might sport more ports on the other side. As for the Surface 7, we believe it might be fueled with Qualcomm’s Snapdragon 8cx. Though leaked benchmarking results show the Snapdragon 8cx isn’t faster than Intel’s Core i5-8250u, it’s only marginally slower and the biggest perk may be that you’ll get significant battery life out of this product.

More details from the image gallery show that the ARM-powered Surface 7 might also get Surface Pen support, just like the Surface Pro 7, but the accessory, along with the keyboard cover might be sold separately like last time for both upcoming models. When talking about the Pro 7’s hardware specifications, we expect Microsoft to stick with Intel’s 10th-generation Ice Lake processors, and if we’re lucky, Thunderbolt 3 support might be available for this machine too.

Microsoft is expected to unveil its new Surface hardware range tomorrow, and like always, we’ll be here for updated and timely coverage, so stay tuned for more.