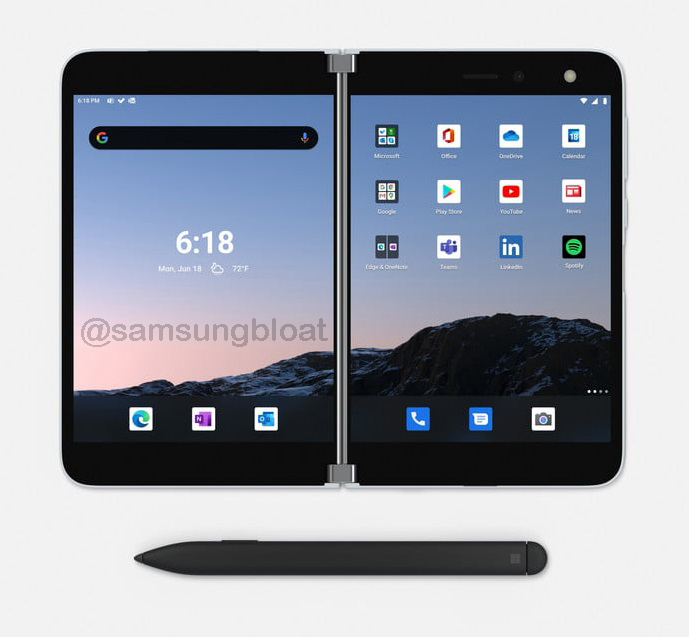 At this point, it is no surprise that Microsoft Surface Duo exists, and the company is doing everything to push it to the public and gain their attention. Very little is known about the device so far, but from the specs revealed a few months ago, we know that the Microsoft Surface Duo is going to bring an older generation of Snapdragon chip and 6 gigs of RAM.

However, what is even more surprising here is that so far, we have not had a proper look at the device so far. Well, that changes today as we got our hands on some fresh renders of the Microsoft Surface Duo.

Honestly, the reason why I would call these renders uninspiring is that if they didn't exist, I would have completely forgotten that the device exists, in the first place. They are coming as a courtesy of @samsungbloat who has shared these renders with us, and you can have your look at them below.

I have to say that the design is nothing awe-inspiring, as a matter of fact, it looks old and boring. Not just that, this reminds me of the PDAs of the older days, and in all honesty, that is not something you would want to remember in 2020, no matter how much we miss these days.

The tipster does suggest that the device is launching very soon but we are not sure just how soon Microsoft will be announcing it. We do know that the launch seems to be a lot less interesting than some might think.

As far as the specs are concerned, our sources report a Snapdragon 855 coupled with 6 gigs of RAM and average battery capacity. Whether or not that is true, we are yet to find out. But for now, this is your first proper look at how the Microsoft Surface Duo is going to look like.