Microsoft on its Revolutionary HoloLens: ‘All Universal Apps Work As Holograms’

Microsoft's HoloLens was a revolutionary unveiling to say the least. One of the more abstract points about the reveal was the integration of Windows 10 and HoloLens at a very low level, with the HoloLens API integrated into the parent os. Microsoft has now confirmed that all Universal Apps will be compatible with HoloLens - in other words, double as a hologram. 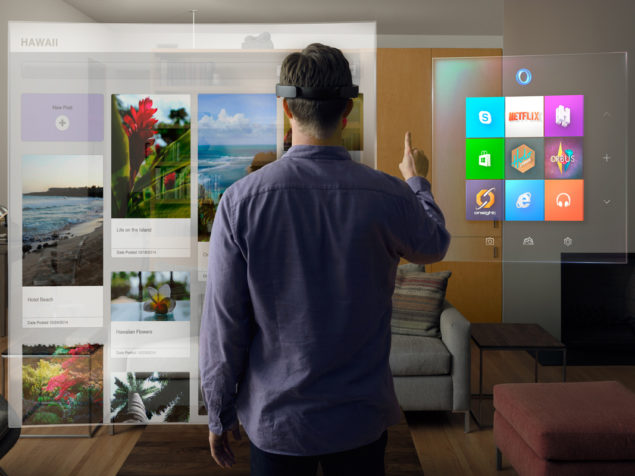 An initial concept of how HoloLens will work out with the tiled GUIs floating in virtual space. @Microsoft

Microsoft's Holo Lens will have native support for universal apps

Windows has been following the one-os-to-rule-them-all strategy since the intro of Windows 8; with seamless integration spanning across platforms and devices. With Windows 10 and HoloLens, they take it one step further, with augmented virtual reality now part and parcel of this philosophy. The ideology behind this approach is to foster a highly universal windows ecosystem. As a developer puts it:

Develop once for all Windows devices using a unified Windows runtime and VS tools that allow you to both support experiences unique to a device in XAML, HTML, and DirectX, and share the code that supports those experiences across all devices using C++, C#, or JavaScript. When your work is finished you can you can produce the app packages that you will submit to the Windows Store and Windows Phone Store with a single action to get your app out to customers on any Windows device.

Basically, the holographic functionality will need to be coded directly into universal apps, which will after all be nothing more than a glorified skin or GUI. Third party apps can also start integrating HoloLens functionality using the HoloLens API. HoloLens will use motion tracking and match moving techniques to then apply the 2D interface on any flat surface (or static in air). To do this, HoloLens will have to match move the camera in real time, which is no mean feat.

When talking about match moving, planar tracking is relatively easy however apps that require dynamic objects interacting or moving in 3D space (think a game character jumping  around the room) will be exponentially more complex to process and it is unclear how Microsoft will manage that without external processing at the moment. But hey, its 2015, and we finally have proper holographic technology - or atleast the first signs of em anyway.