Before moving on to what today's Windows 10 build brings to Insiders, we have to ask... who exactly is having quarantine dance parties!??

Pause your quarantine dance parties, #WindowsInsiders! It's time for Build 19608 in the Fast ring. Get more details on the blog: https://t.co/X0cFr2Vwxl #AreYouFlightingYet pic.twitter.com/SDHgxQzWXm

Here is the complete changelog of Windows 10 Insider Build 19608

Over the years, we’ve made a number of improvements to Settings based on your feedback, and we’re happy to share the next one is starting to roll out. We’re adding the ability to search the lists of file types, protocols, and apps when setting a default.

This change is currently available for 50% of Insiders in the Fast ring as we evaluate the quality. We’ll let you know when that rollout increases. Please give it a try once it’s available on your device, and let us know what improvements you’d like to see next!

Continuing our partnership with Samsung, we’re excited to bring you an early preview into the newest feature for the Your Phone app - file drag and drop. This feature allows any Samsung smartphone that supports phone screen to wirelessly drag and drop files from their phone to their PC and vice versa without having to dig for cables. Give it a try and let us know what you think!

The Cross-device Copy and Paste feature, which allows you to seamlessly copy text and images between devices, is now rolling out to Samsung Galaxy S10e/S10/S10+, Note 10, and Fold devices.

Compose new messages, within the Messages node, is getting a brand-new rounded user interface (UI). Check it out and let us know what you think! 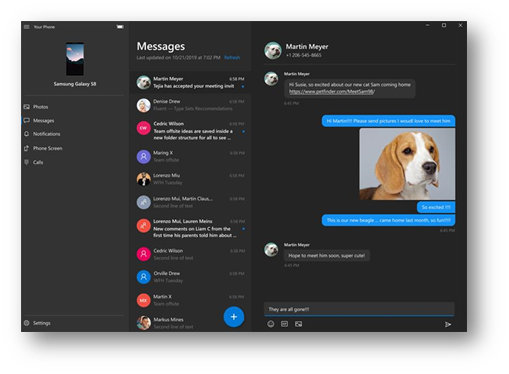 We recently introduced a number of UI changes to improve the overall look and feel of the Your Phone app. Updates include: 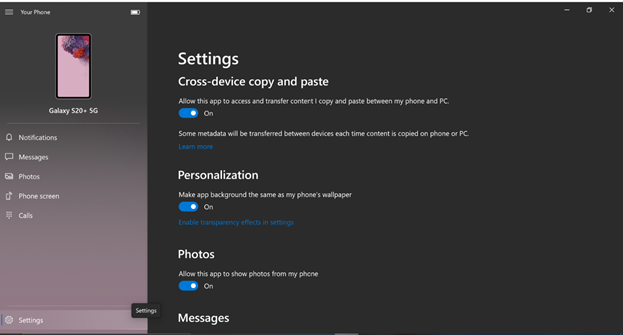 For more details about today's release, head over to the official blog post.