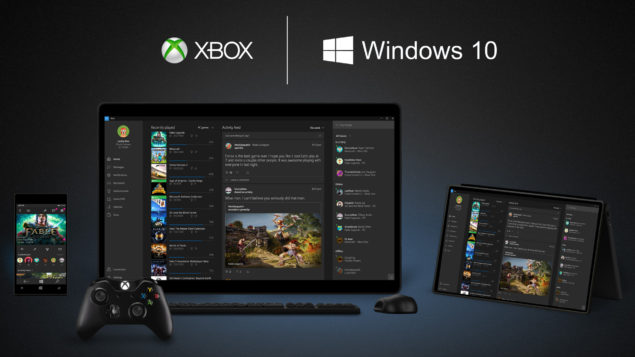 With Microsoft's renewed focus on PC (more specifically, Windows 10) support for games, another set of issues recently arose: the Universal Windows App platform has several limitations right now, such as the lack of mGPU (multiGPU, AKA SLI or CrossFire) support, the lack of Exclusive Fullscreen mode and forced VSYNC.

This sparked widespread concern for the upcoming WIndows Store exclusive games, starting with Gears of War: Ultimate Edition that stealthily launched today with the exact same set of problems experienced with Rise of the Tomb Raider.

However, Microsoft at least acknowledged the overwhelming feedback. Mike Ybarra, Director of Program Management for the Xbox Platform, mentioned two days ago in a tweet that the VSYNC issue will be fixed.

@darkhand12345 SLI and Crossfire work, games just need to support it just as always. We will fix vsync.

Microsoft's Head of Xbox Division Phil Spencer was even more specific today in an interview with PC Gamer. He said that their goal is to make the Universal Windows Platform the best platform for game developers and gamers to support, and that certainly includes addressing all those issues.

Yeah, well, we obviously have the same list, and maybe even a little longer than what the community has brought up around Rise of the Tomb Raider. Certain things will happen very quickly in terms of, like, mGPU support and stuff where there’s no policy, it’s just us working through the timeline of implementation. VSync lock, kind of the same thing. There’s specific reasons that it’s there, but it’s not something that’s kind of a religion on our side that this has to work. Modding, we’re focused on modding even on console with, like, Fallout. We obviously own Minecraft, we understand the importance of modding, and making sure that we support that in the PC ecosystem is critical to UWA success. Our goal is to make UWP [Universal Windows Platform] the best platform for game developers and gamers to support, but we know we’ve got room to grow.
With Tomb Raider coming out, I think for most people that just want to go play a great game the UWA version doesn’t keep them from playing a great game.

That’s not to downplay the feature list that people have sent us. I understand the need to react and to fit in in the PC gaming community with the tools that they rightfully want at their disposal. It’s in our tracking system, stuff that we’re going to get done, and we have a real path to get it done. The reason I wanted to articulate those issues and deficiencies is so that people recognise I’m not trying to say they’re not important. I’m not trying to say that, ‘oh, 90% of the people don’t even know what mGPU means so go away.’ I’m saying, ‘no, these are features we know we need to support that we know they’re not there today but we are committed to supporting in the future.’ Because I don’t want people to look at this as a passing fancy on our part of, ‘can we just quickly port some console games over to PC and hope to make a little bit of money?’ It’s not all about that. We are the Windows company, and ensuring that the Windows gaming ecosystem is strong is important, and that means supporting these features.

Microsoft is certainly going to great lengths in order to prove PC gamers that it's not messing around in terms of line-up. Gears of War: Ultimate Edition is out today, Killer Instinct is coming on March 29 and, after countless rumors, Forza Motorsport is coming to Windows 10 this Spring with the free-to-play Apex version.

However, these issues within the Universal Windows App environment need to be fixed as soon as possible as we already pointed out a few days ago. Microsoft already lost the trust of PC consumers once with the Games for Windows Live debacle, it just cannot afford a repeat this time around.

At this point, it's worth gauging the readers' opinion.