Windows 10 has been adopted on a wider scale since its launch and Microsoft is taking every possible step towards the promotion of its Edge Browser and other stock apps. Users remain hesitant of the preloaded Edge Browser on Windows 10, while preferring alternatives such as Chrome or Firefox above the stock browser.

However, Microsoft's newly leaked preview release 'build 10568' for Windows 10, shows a prompt that can be seen whenever users switch from default apps. The purpose of this prompt is to encourage Windows 10 users to use the Edge Browser rather than switching to any other alternative.

Let's dive in to see some more details on the leaked build for Windows 10 and what sort of prompt is used by Microsoft.

Since Microsoft badly wants Windows 10 users to give its Edge Broswer a chance, the company has included a new prompt that reads ''Give Microsoft Edge a shot''. If your hands are currently using Windows 10's Edge Browser and you want to switch your default to another browser, such as Firefox or Chrome, the aforesaid prompt will appear. The prompt does not solely contains the message, but advertises new additives in the Edge Broswer.

Some of the main highlighted features of the Windows 10's Edge Browser is the ability to use a stylus on web pages and doodle ideas for sharing purposes. It also has its very own reading mode and Cortana integration that aims to provide help on the go. Even though these features might sound appealing to many, a lot of users might still not adopt the browser due to layout preferences. 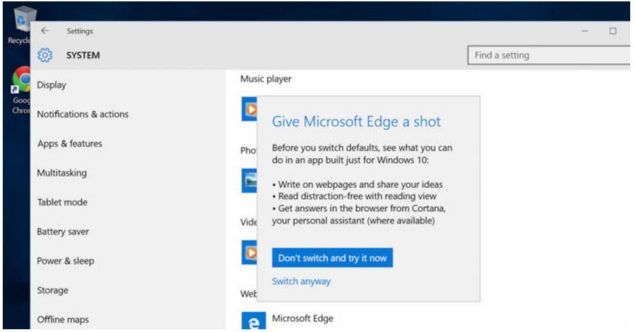 Moreover, the prompt boldly has a ''Don't switch and try now'' button that allows users to stick with the company's option. This shows the software giant's desperateness to reach its global objective of 1 Billion Windows 10 devices. Microsoft is so determined to fulfil its objective that it forcefully installed Windows 10 on some users' computers that previously ran Windows 7 and Windows 8 or 8.1. Users were not given an option to opt out of the operation of upgrading.

If the prompt reached out to the public Insider Preview program, we're sure that a lot of rival browsers like Chrome would be frustrated. However, it's not certain that it will make it that way. Additional leaked details point Microsoft's experiments to make users stick to the company's default apps.

As for now, share your thoughts about the Edge Broswer? Will you guys give it a shot?