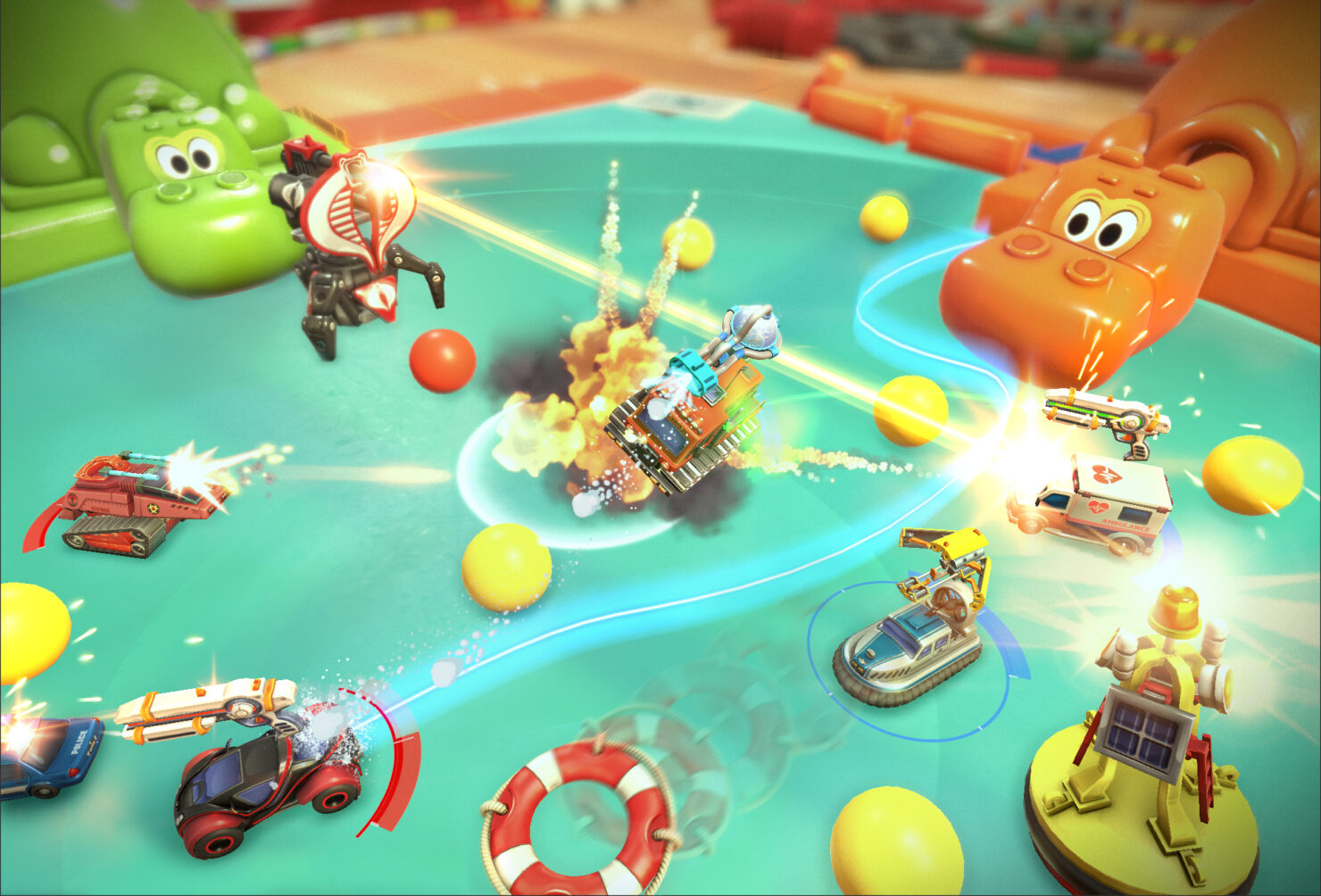 Some of my fondest gaming memories come from playing local multiplayer games with my siblings. The go-to party game on the Mega Drive was undoubtedly Micro Machines 2: Turbo Tournament. There’s nothing like racing against your friends as you fight to stay afloat on a moving sponge across a kitchen sink… This game pretty much had it all: a multi-tap built directly into the cartridge, eight-player local multiplayer (on a Mega Drive!) and incredible gameplay that I’d argue is still unrivaled to this day.

If you haven’t had the joy of playing any of the Micro Machine games, it might be because the last entry in the series was back in 2006 on the PlayStation 2. Some readers may remember a game called Toybox Turbos, also developed by Codemasters back in 2014 for the Xbox 360 and PlayStation 3. Many saw this as the developers ‘testing the waters’ to see whether people were still interested in this type of game. After eleven years, the series is finally being revived by Codemasters. I had the pleasure of trying out Micro Machines: World Series for a few hours ahead of its launch next month.

A lot has changed in gaming over the past eleven years, so everything you’d expect from a present day Micro Machines is included: online multiplayer, pre-order items (car skins) and loot boxes! You cannot escape loot boxes these days, can you? World Series features loot boxes so you can try to unlock a new car skin, maybe a voice line, or potentially some other rubbish you probably don’t want. 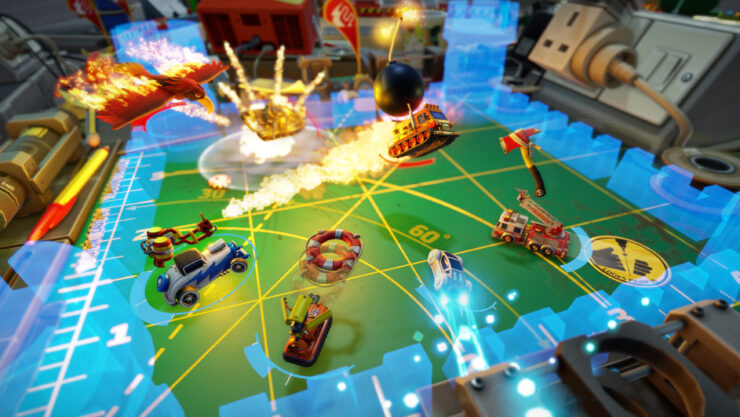 The online multiplayer looks to be the focus of Micro Machines: World Series, featuring up to twelve players in the brand new Battle Arena mode. The two battle modes available were King of the Hill, a mode where players are required to stand on various points of the map in order to gain points for their team, and Capture the Flag, where teams compete to capture three flags from their opponents' base. I was surprised to find that these modes were not only fun but they also worked well in the Micro Machines setting. Hasbro, the owners of the Micro Machines license, has given Codemasters access to several of their other properties. Despite being, well, advertising, seeing Hasbro owned entities like Hungry Hungry Hippos and NERF branded weapons just makes sense in a game like this.

Speaking of the NERF branded weapons, some fans of the classic Micro Machines games may be concerned to hear weapons also feature in the racing modes. Weapons have always been hit or miss with fans, and Micro Machines: World Series looks to be no exception to this. Players must run over item boxes in order to have access to three types of weapon: a nerf gun with several bullets allowing you to slow opponents down, a bomb that can be used to explode trailing cars, and a hammer that can take out enemies in a single hit. Racers that have been left behind in Micro Machines’ classic Elimination mode also have access to an air strike which has the ability to wipe out cars instantly. Fortunately, Codemasters have allowed players to turn off weapons very easily, though you may not want to do this as races can drag on for quite a while if they aren’t on.

Unlike previous Micro Machines games, I found the racing in this new installment to be slower than I would have expected. The slower pace of the races allows new players to follow the action with ease, however, it isn’t as noticeable in the Battle Arenas due to the frantic nature of the game mode. This isn’t to say Micro Machines: World Series lacks depth: if anything the opposite is true. The game now allows players to choose their vehicle before starting a race. Each vehicle has its own unique abilities, for example, the hovercraft can drive over any surfaces (regardless of hazards) without being affected. There are trade-offs to this ability, the main one being that the hovercraft is extremely difficult to control when making any kind of turn. If you prefer the more standardized setup of the classic Micro Machines games, nothing is stopping players from setting their own rules prior to playing the game. 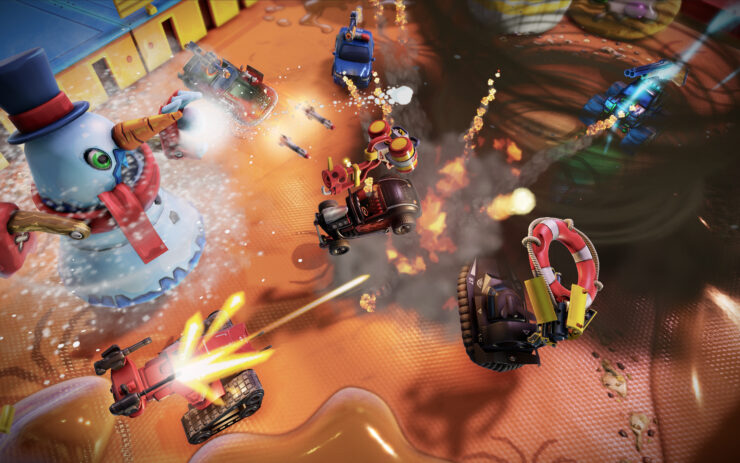 There’s one fault I find to be unacceptable in this day and age is the amount of time you have to wait in between Elimination rounds. When a player wins an Elimination round, everyone must wait almost ten seconds before getting back into the race. I don’t understand why the wait time is so long, I mean, you didn’t even have to wait that long with the NES game! Hopefully, this problem will be addressed before the game comes out. This problem isn’t a deal breaker on whether you should buy the game, it’s just a waste of time when it really doesn’t need to be.

I must say, it disappoints me to see Codemasters treat the local multiplayer modes almost like an afterthought. It’s understandable that the developers would focus on the online game modes as there’s far more you can do with each player having their own console, but it would’ve been nice to see more than two local modes (Elimination and Free-For-All). Remember, this is the same series that was once famous for being one of the best party games around. It’s sad to see the ‘party’ being moved online instead of on the couch where it belongs.

As a PC user, I am always worried that games like this will run poorly or they may be badly optimized. This is not the case with World Series, which seemed to have no problems whatsoever during my time with the game. At one point I thought the game may suffer from some input lag, but it turned out to be caused by the TV. Playing Micro Machines: World Series with a monitor felt much more responsive, to my relief.

Codemasters have done a great job of bringing Micro Machines into the present day. The online modes add even more value to an already cheap game (£20/$25), and the local multiplayer modes are exactly what fans expect to see from the series. Whether every Micro Machines fan is going to be pleased with this game remains to be seen, we’ll find out closer to the game’s launch in a few days. Do check our interview with the game's Producer.