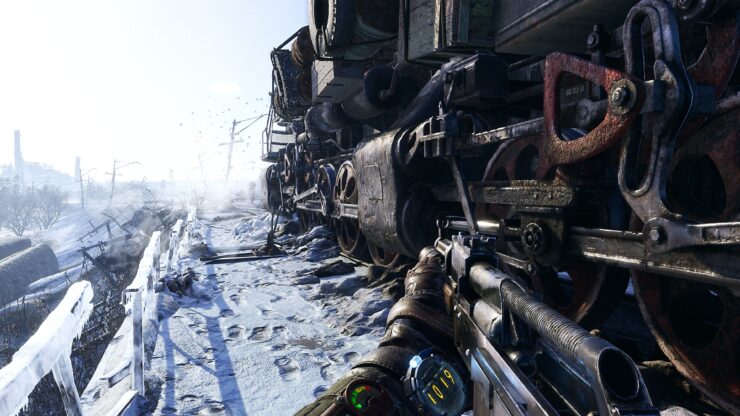 Time to leave the metro. The Metro series returns for a third installment and brings the 4A Engine along for the ride again in Metro Exodus.  This time we're exploring a very different world than before.  In the first two entries into the series we found ourselves slinking through underground passageways and cities believing the world above to be completely left to waste.  Either way, if you're curious how we rated the game make sure you catch our full review. But from here, let's get into the performance review.

Testing Metro Exodus was a bit of a challenge, not just because I got locked out a couple times but because it is a game whose performance varies wildly depending on the scene.  You can see frame rates go from 150 to 60 in the matter of coming around a corner and seeing a flaming barrel.  Those flaming barrels are killer for performance.  The game does feature a built in benchmarking tool, but it's pretty far off from actual in game performance.  I have a feeling that because it's a DX12 title you'll see a lot of people use it since it makes gathering result data easy, but I found that actual in game performance to be more indicative of what to expect.

That said, we captured in game performance using OCAT and extracting AVG FPS, 1% Lows, and .1% Lows using our in house tool.  We got our results from a scene just after the incident at the church and set our route starting on one bank with the broken bridge, walking up the side to the railroad tracks, turning towards the Aurora, walking through the camp out the other side, then back down the opposite bank and walk for about 20 seconds down the riverside away from the train.  I want to point out that for the most part the game played very smooth and the 1% and .1% lows are more indicative of the reduced performance through the area where the train is as that's where it was at it's lowest for some time.  Outside of the train area the average frame was typical of what you would see.  We also did all our testing without Hairworks and Advanced PhysX disabled.

Testing preset performance is a good way to see how the game scales by simply adjusting the presets rather than individual settings for a quick idea. We did all our testing using the Ultra Preset but we can see that adjusting down has a pretty big benefit on performance to eek out those extra FPS if you feel you need to. We included 4K screenshots to show the differences between the presets if you want to see how they impact visuals. 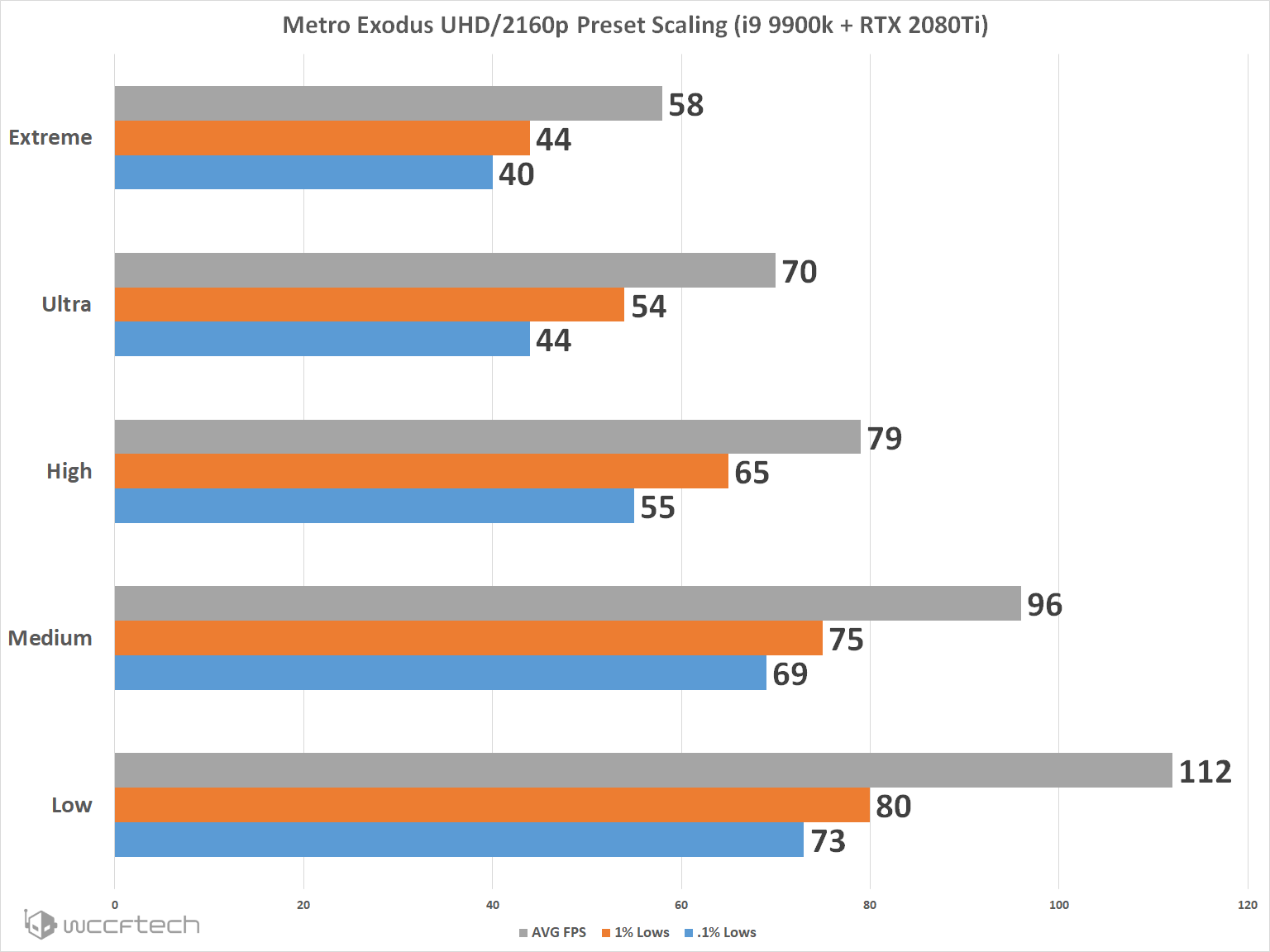 Core scaling is always a very interesting aspect to look at, especially as we see more and more games migrating on over to DX12.  One constant lately is the abysmal performance from dual core CPUs and nothing is different here.  But unfortunately there's not much happening past 4 cores.  Something very interesting is happening here in Metro Exodus and that's the idea that once you get to 4 cores the Hyper-Threading doesn't actually help, in fact it is more of a hindrance as we see better performance on a non HT 8 core configuration.  But, in our GPU tests we stuck with the traditional i9 9900K configuration. 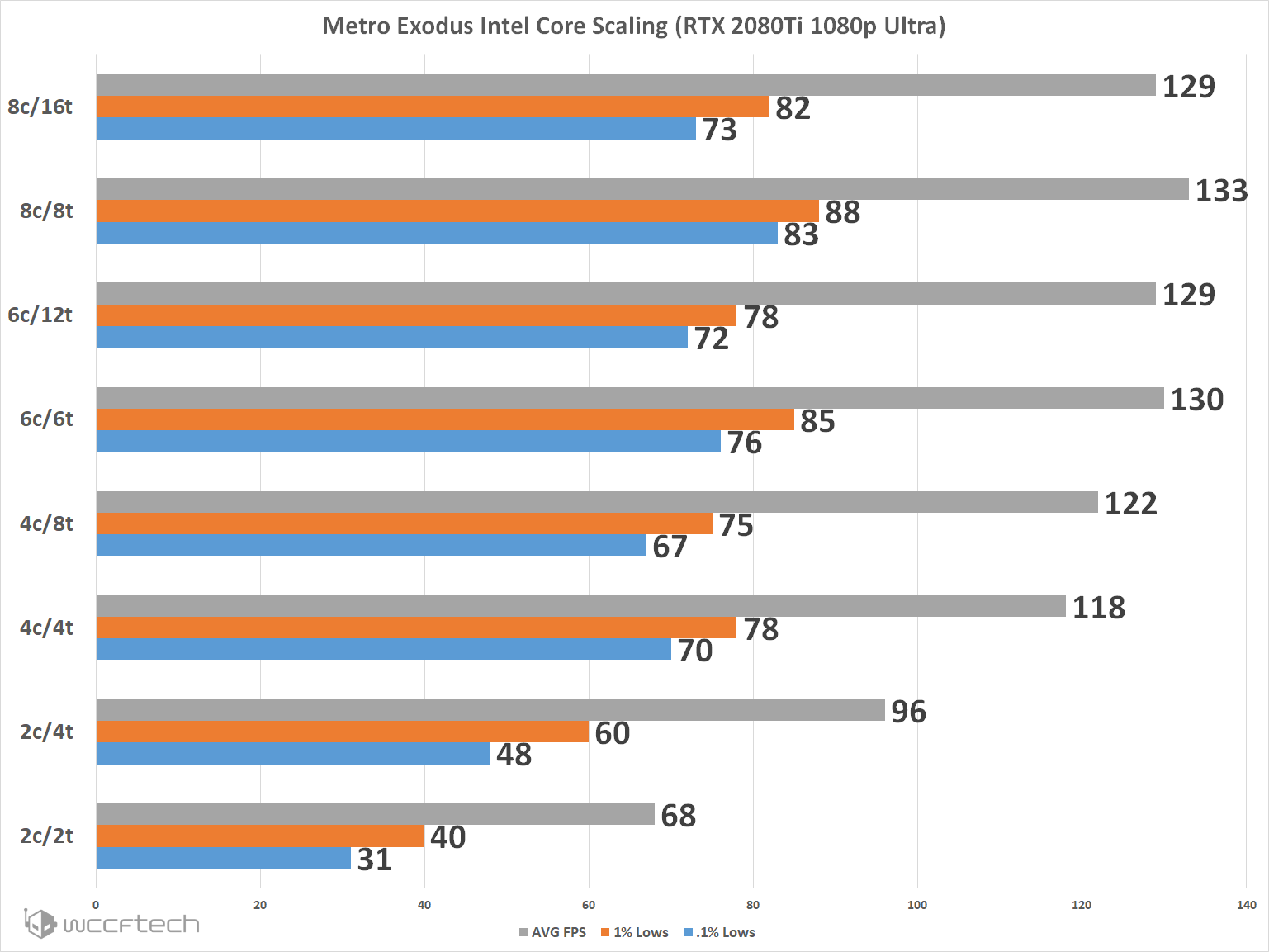 Right off the bat at 1080p we see that running Metro Exodus at Ultra settings isn't going to be exactly an easy chore.  The RX 580 and GTX 1060 both come in under the targeted 60FPS mark but from looking at our preset scaling it doesn't seem that it would take much tweaking to get the game over that hurdle. At the higher end of the spectrum we saw the scene with the train take a massive performance hit across the board as those 'killer barrels' were on screen. 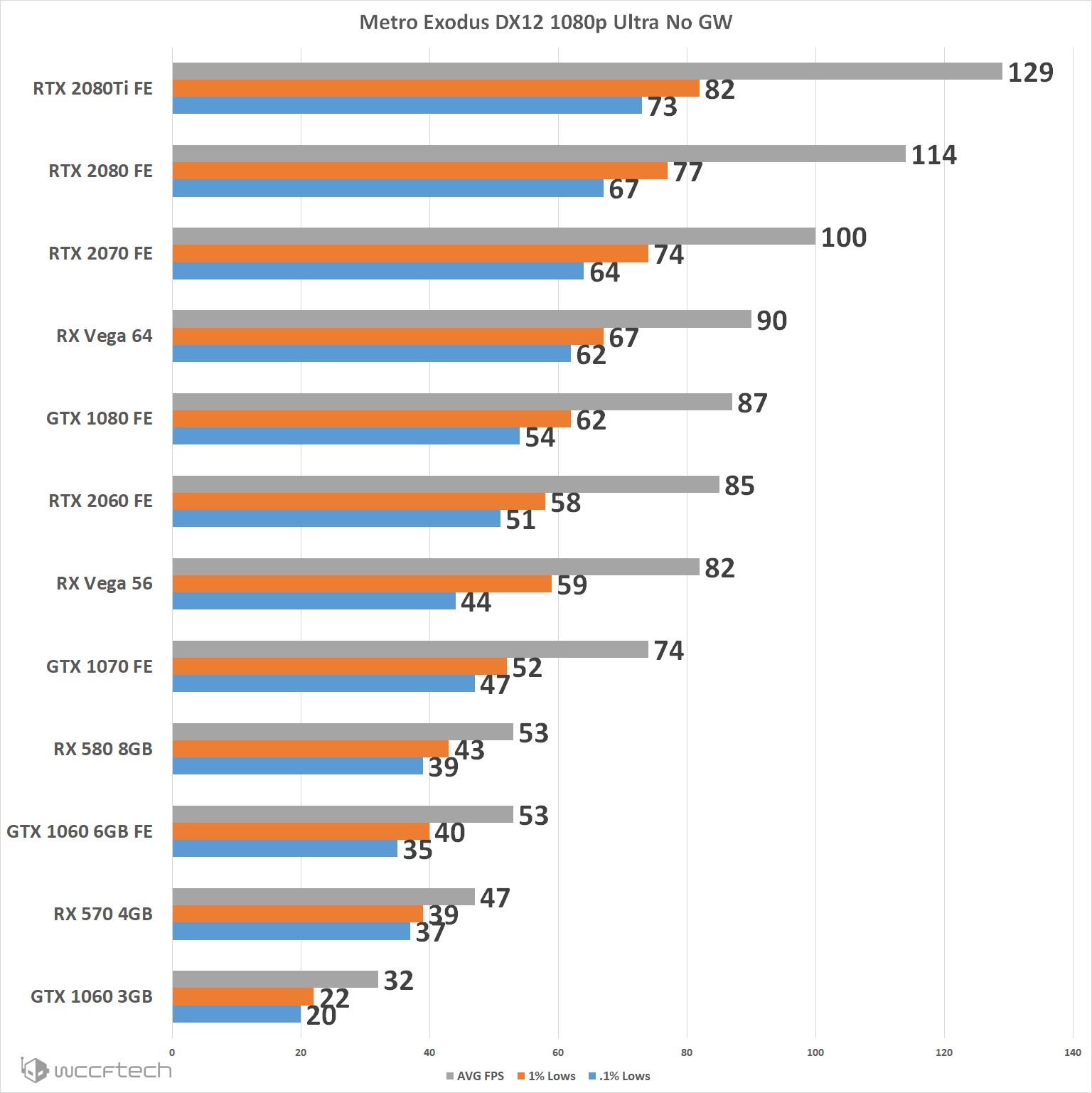 Moving up to WQHD we see a similar story unfold but at this point it leaves the mainstream cards out in the cold without looking into serious visual consolations. Even the enthusiast cards begin to suffer here a bit and it might be worth looking into lowering some settings in hopes of boosting that performance. 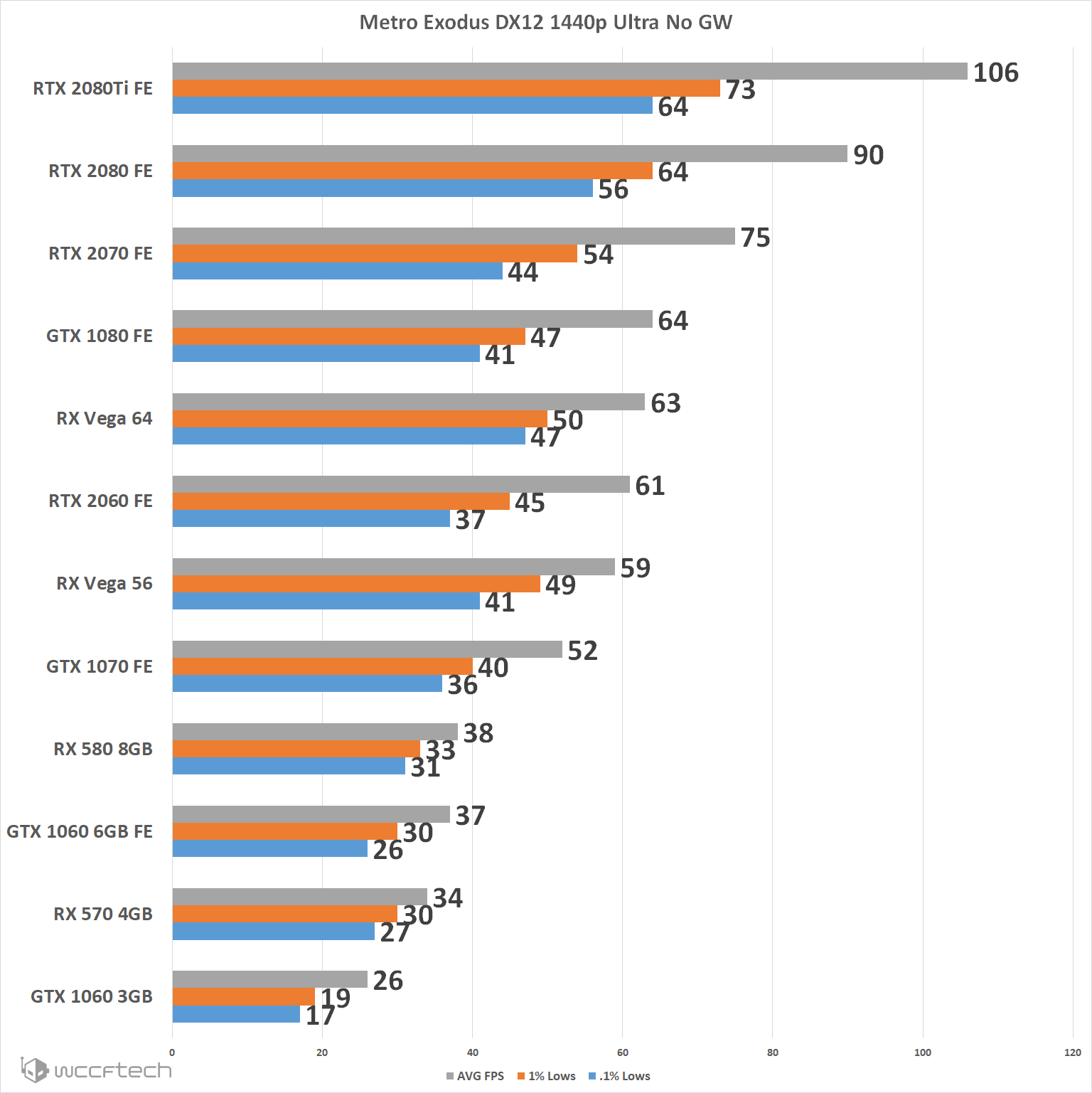 And finally arriving at UHD we see but one card standing above that magical 60FPS line.  Some may ask why we even test the lower end cards at this point and the only real reason is, why not? I don't expect people playing on a GTX 1060 3GB to be trying to play a game like this at UHD resolutions, but sometimes it is just fun to see where things fall. 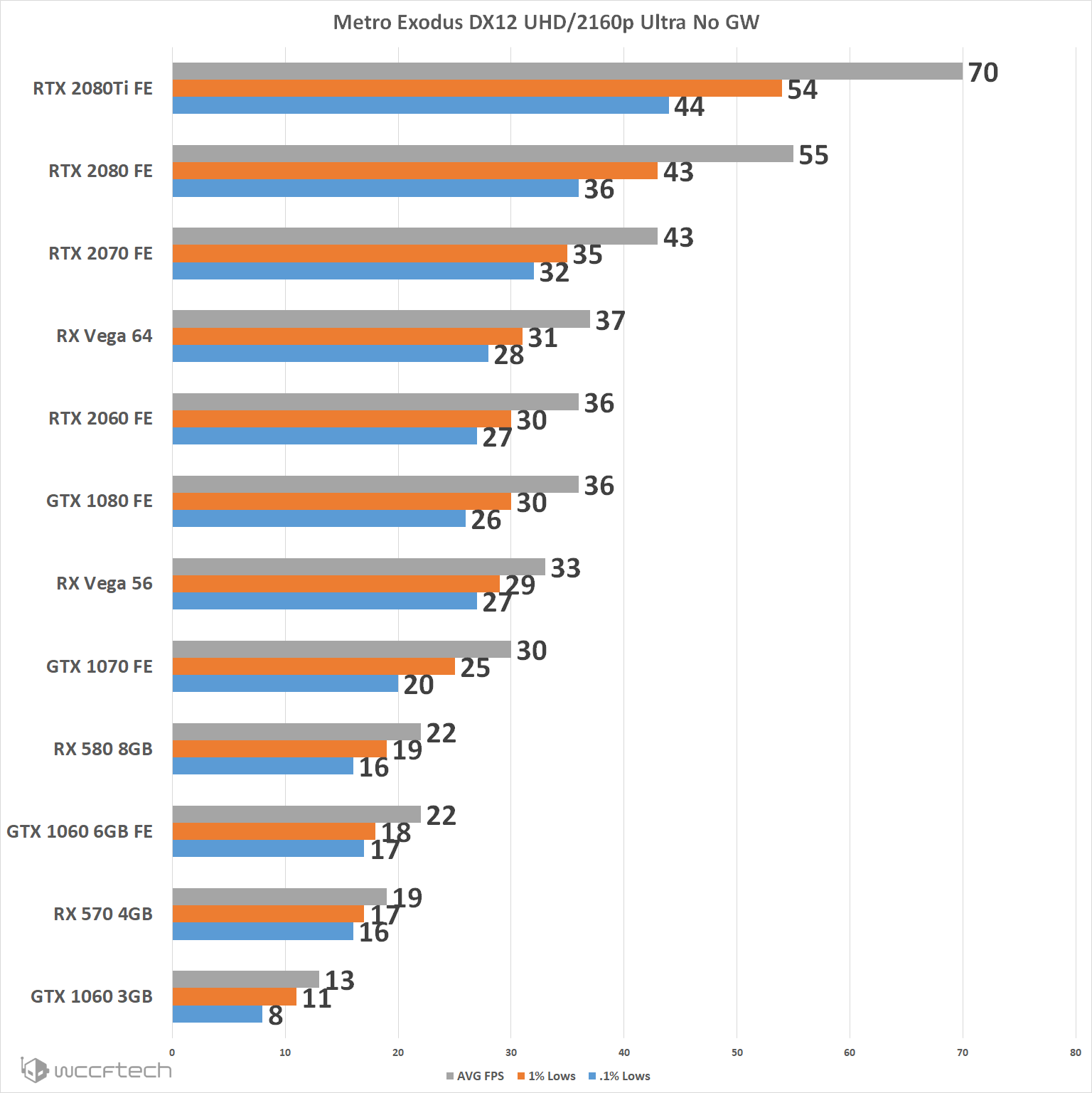 Metro Exodus launched with full RTX support which is a welcome addition after all these months from the GeForce RTX series has released. But you're not getting reflections or shadows here.  Metro Exodus features Ray Traced Global Illumination and replaces the baked in lighting with ray traced bounces coming from the sun and sky to handle to the way the scenes are lit.  This doesn't mean it's not performant impactful because it is.  We ran the same route but this time with RTX enabled to see the performance impact on all cards at all resolutions.  We also included a scened with RTX On vs RTX Off.  As much ire is floating about regarding the softening of the image when using DLSS I would still recommend it for those wanting to use RTX Ray Traced Global Illumination when it is available, or at least give it a try yourselves and make a personal judgement call on its value. That being said I would also recommend trying resolution scaling to improve performance as well, it really is going to be up to you to figure out which one you prefer.  The performance impact is pretty high, especially at higher resolutions, but you have to remember that earlier performance expectations had the RTX 2080Ti running at around 40FPS at 1080p and I think we can all agree that the final launch is seeing much better performance than that.

There are still some things to be explored, like the performance impact of Advanced PhysX and Hairworks, both of which do add to the game in scenes where they are used.  Hairworks on enemies is a nice touch when they're dog piling on you, but Advanced PhysX is a bit less noticeable so you may be able to flow through the game without really missing much on that one.  Performance overall is okay for an open world game like this that does have a good draw distance and nice design with nothing really breaking the immersion. I would have liked to see better performance on mid range cards but I also am starting to feel like the RX 580 and GTX 1060 are more than due for a performance boost by a new generation to come in and replace them as they're really starting to show their age. I've reached out to NVIDIA concerning some question regarding DLSS and screen capture and local recording while using it, hopefully there's some more information I can add to looking into DLSS over time as it's become quite the intriguing topic. But for now, I've got some desolate wasteland exploration to get back to before the next major PC game launch.

Metro Dev: Ray Tracing Is Doable via Compute Even on Next-Gen Consoles, RT Cores Aren’t the Only Way