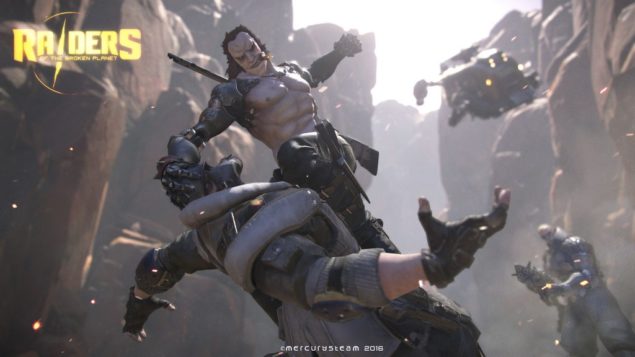 UPDATE: the press release is finally out, giving us a lot more information on the game, scheduled for release later this year. Here's the most relevant excerpt.

Raiders of the Broken Planet is a Multiplayer Online Asymmetric Adventure: Fight the invaders teaming up with other Raiders, or turn the tables and storm into battle with those invaders  fighting at your side!

With its distinctive blend of shooting, brawling and thinking man’s strategy,Raiders of the Broken Planet is a mouth watering proposition to gamers looking for an immersive, cinematic story coupled with intense and epic action.

MercurySteam is also announcing that it will be self-publishing the game as an independent for the first time. The powerful story driven narrative will be delivered episodically, with each part selling at an extremely low and attractive price point. A company spokesman commented “We saw an exciting opportunity with this title to take advantage of digital distribution and offer the game at a much lower entry point than would otherwise have been possible. This model also allows us to work closely with gamers to create something that they can help shape too.”

ORIGINAL STORY: A couple of months ago, we reported that MercurySteam and Dave Cox were about to unveil a new game. That took longer than we thought, but the veil finally came off today and the title is Raiders of the Broken Planet. The game has been described as an "epic online multiplayer asymmetric adventure" on MercurySteam's Facebook page.

There's already a sign-up for beta on PC, but Dave Cox confirmed on Twitter that the game will be coming to PlayStation 4 and Xbox One too. We'll update the story as more details are revealed.