Lenovo K3 Note; The OnePlus One Killer That Costs Less Than $150

While Lenovo K3 Note was initially introduced to challenge Meizu’s M1 Note, it appears that the latest benchmarking reports published by AnTuTu suggest that the affordable smartphone is able to hold its own against the likes of Samsung’s, HTC’s and OnePlus’ high-end offerings. Given the fact that Lenovo K3 possesses a modicum price tag of $145, the smartphone will not only be giving Meizu M1 Note problems but consumers who intended to purchase the OnePlus One, Samsung Galaxy S5 or HTC One M8 will quickly re-evaluate their purchasing decisions after viewing the latest benchmarking results of Lenovo K3 Note.

According to a source, Lenovo K3 Note was able to score in excess of 46,000 points on AnTuTu, which is an indication that the chipset powering the smartphone (MediaTek MT6752 SoC, an octa core processor powered by ARM's Cortex A53, at a base frequency of 1.7 GHz) is a force to be reckoned with. Even though OnePlus One features a whole gigabyte of RAM more than the Lenovo K3 Note (3 GB compared to 2 GB), the device is still unable to overcome the capabilities of Lenovo’s affordable handset. 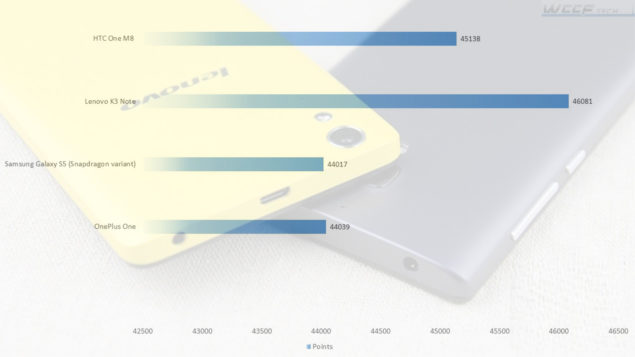 In addition to the octa-core processor, Lenovo K3 Note features ARM’s Mali-T760 GPU, and just to refresh your memory, it is the same mobile GPU present inside Exynos 5433 variant of Galaxy Note 4, which means that one can expect similar, if not complete on par gaming performance when compared to the Note 4. Similar to the remaining three handsets that were benchmarked, Lenovo’s affordable smartphone radiates a resolution of 1080p, although the handset and OnePlus One are the only two that feature a 5.5 inch screen size (Galaxy S5 and One M8 feature a 5.1 and 5.0 inch screen size respectively).

For wireless connectivity purposes, a Category 4 LTE modem coupled with an 802.11 n wireless adapter will allow users to stream the internet comfortably. Although the device only comes packing with 16 GB of on-board storage, Lenovo has catered to consumers well by adding a storage expansion slot with a limit of 32 GB. The company has also introduced a Teana version of Lenovo K3 Note. This particular model features better performing speakers, but will set the customer back by 999 Yuan (which translates in to $161. The base model carries a price tag of $145).

Regardless, even if the smartphone populace settles on purchasing the Teana version of Lenovo K3 Note, they will still be able to get more performance out of the smartphone while paying less the half the price stamped on to OnePlus One. Given below are the pricing details of OnePlus One, which varies depending on which storage model the consumer purchases.

OnePlus is gearing up to release the successor of OnePlus One, and if the Chinese startup is not able to price it aggressively as its predecessor, then it will be a no-brainer for consumers concerning which smartphone to purchase.