With Apple having cleaned its hands off of the Apple Watch and MacBook upgrades, the Cupertino company should now have plenty of time and resources to focus on its largest iPad to date - the oft-rumored iPad Pro. The iPad Pro is turning out to be Apple's first serious take on tablets for the educational and enterprise sectors, but looks like the Cupertino manufacturer known for its attention to the details has much more than that in mind for the tablet. 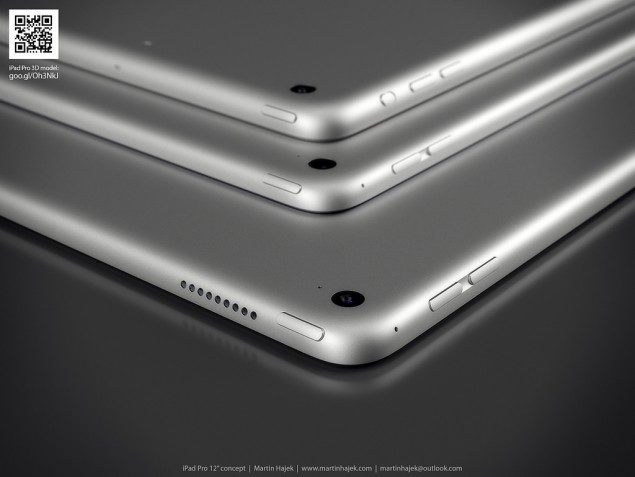 While its given that Apple's larger tablet will be featuring a processor upgrade, given particularly Samsung and other manufacturers pushing hard for SoC improvements, today's news focuses more on how Apple is giving focus toward's the iPad Pro's multimedia capabilities as well. Renders posted by teamUbuntu showcasing the upcoming iPad's protective shell end up providing us a better look and understanding of the aesthetics to be expected from Apple's tablet.

Starting from the speakers, the iPad Pro will be coming with four speakers, both at the top and bottom of the device. This should end up giving the device some very good multimedia capabilities and stands in line with earlier reports that Apple might be pushing for surround sound on its device. In addition, features such as camera on the top right corner and the volume up and down buttons can also be seen on the renders posted above. When it comes to the iPad Pro, one thing's for sure. To stay at par, or to gain a lead on the competition, Apple needs to brew up some serious processor magic this time around as we've been seeing impressive improvements in mobile chipsets these days. Specifications expected for the iPad Pro include 2 GB of RAM, display resolution of 2K, TouchID and a hefty battery of 11000 mAh. All of this is also expected to max out at a thickness of only 7mm, so lets see how Apple manages to deliver on larger screened tablets. Stay tuned, we'll keep you updated and let us know what you think in the comments section.