The upcoming game Mad Max from developer Avalanche Studios is set to release on September 4th 2015, and this seems to only apply for the PC, PlayStation 4 and Xbox One versions. Nothing has been mentioned about the PS3 and Xbox 360 versions, but according to Game Informer the last-gen versions have been "left by the wayside" so that the team at Avalanche could  focus on optimising the PC and current-gen versions. Over at Neogaf we also have a Pre-order image as well as the box-art. 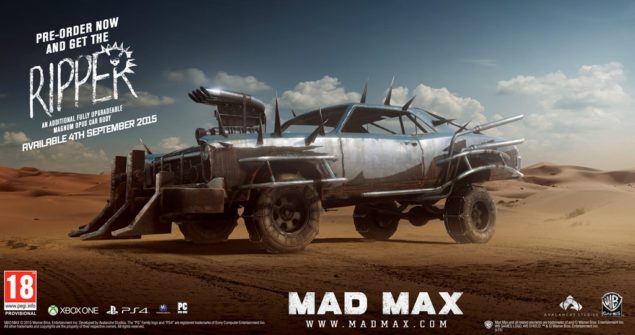 A couple of different reports has come in after this popped up on the Internet. Industry insider Shinobi602 which pretty much never have been wrong  when it comes to "leaks" and David Scammel which is the News editor for VideoGamer.com are two of the main ones so far as you can see below.

Mad Max releases on PS4, Xbox One and PC on September 4. Xbox 360 and PS3 versions cancelled.

Game Informer stated in their article:

"Much has changed since the game was announced at E3 a few years ago. Most notably, the studio has decided to leave the planned Xbox 360 and PlayStation 3 versions by the wayside. That move has allowed the team to deliver stunning vistas and effects that will challenge your expectations of what the Wasteland might look like. In short, it’s definitely not a bland, endless stretch of sand. We got an extended demo and several hours of hands-on time; our 12-page cover story has in-depth impressions of what we saw and played, plus a look at the car combat, story, and characters that play pivotal roles in the game."

Now I'm all for dropping the last-gen consoles, this should enable you to you deliver a good and optimized game that isn't a complete mess on launch (one would hope), and if the game turns out to be a complete mess upon launch well, shame on you Avalanche shame on you. So far the few screenshots and video material we have seen of Mad Max deliver some very stunning visuals.

Since the Release date is set for Spetember 4th, this means that Mad Max will be out before Avalanche's other game currently in development, Just Cause 3. And Just Cause 3 is shaping up to be quite nice and equally as visually stunning as Mad Max.