Just Cause 3 Gets 4 Amazing New Screenshots

Just Cause 3 is an open world action-adventure game developed by avalanche studios. it is the third game in the Just Cause's extremely successful series where the Just Cause 2 was a game changer in the gaming industry. Just Cause 3 has just recently been confirmed with a trailer to its name and several screenshots being released for the game. 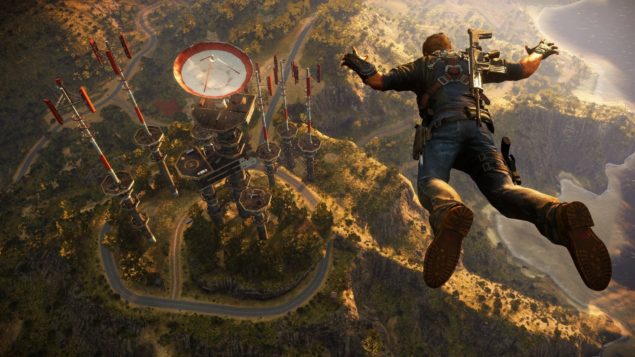 More Screenshots For Just Cause 3 Have Just Surfaced

New screenshots for the game have surfaced on super video game news which show the amazing environment of the game in its new sequel. They range from chaos to the sporty world the game hosts where Rico is shown creating chaos at a gas station firing bullets with his machine gun towards the burning gas station. Skimming through the first one, we can also see Rico skimming across the island on the 4 wheeler in the middle of the action where it looks apparently like the cars have crashed into each other.

Moving on we can see a sports Rico driving a sports car and an explosion in the background. Alongside we can also see Rico gliding over a farm towards a tractor and a person staring at him in the background with a wonderful dynamic view of the animated world. This is just a page in the book of adventures in Just Cause 3's amazing world. You can view the screenshots below:

Just Cause 3 will take place on a fictional Mediterranean island known as Medici, where Rico will put on the gloves against the merciless rule of dictator General Di Ravello. The game will offer a slew of new items and abilities, including “vastly improved parachute and grapple mechanics” and an “all-new wingsuit.” as shown in the last screenshot above. The game will feature an amazing  400 square mile map, and as you can see that there is plenty of action to follow in different parts of the game and new surprises include bearings such as enemy bases, propaganda billboards, and new vehicles and explorable locations.

Just Cause 3 is scheduled to release in 2015 for PC, PlayStation 4 and Xbox One. Speaking against the reports suggesting that the upcoming sequel would be free-to-play, Avalanche Studios has clarified that this won’t be the case, and that microtransactions will not be a part of the game at all.