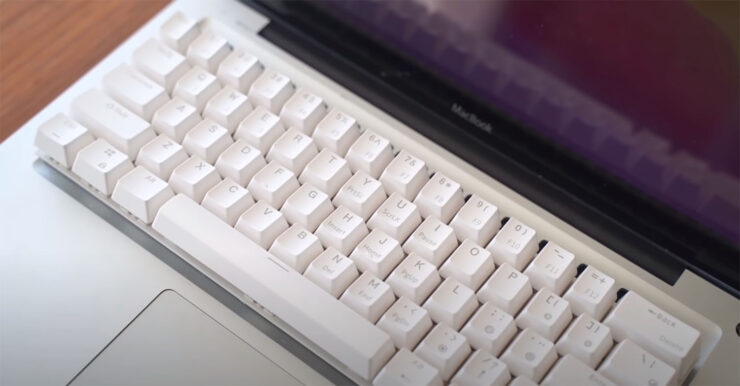 Apple did everyone a solid favor by replacing the butterfly keyboard with a scissor switch mechanism on its MacBook Pro and MacBook Air. Users can now enjoy improved tactility and an overall enjoyable typing experience. Still, some might argue that the new switches cannot be compared to a mechanical keyboard on a MacBook Pro, but it might take Apple an eternity to bring this change to its portable computers. Fortunately, one YouTuber has shown that it is possible, as he mods his personal Mac to feature a completely working mechanical keyboard.

Unfortunately, the Bulk of the Mechanical Keyboard Prevents the MacBook Pro’s Lid From Being Closed Now

Dubbed the Mechbook, YouTuber Squashy Boy did not look like he was satisfied with the current keyboard on his MacBook Pro. In the video below, the machine looks to be an old one, as it has an assortment of ports, ranging from a MagSafe charger to an RJ45 Ethernet port, both of which are not present on modern-day MacBooks.

In order to hold the keyboard in place, the YouTuber used a glue gun, while also removing the keyboard switches with different ones to provide a smoother typing experience, at least, according to him. The result; a modded MacBook Pro that can likely increase your typing speed.

Unfortunately, the lid of the machine can never be fully closed and it is not confirmed if this process would be possible on newer MacBook models. Regardless, it was a fun experiment and if you wish to check out the entire clip, it is given below.

Would you appreciate it if Apple made efforts to bring mechanical key switches to its MacBook line? Tell us down in the comments.