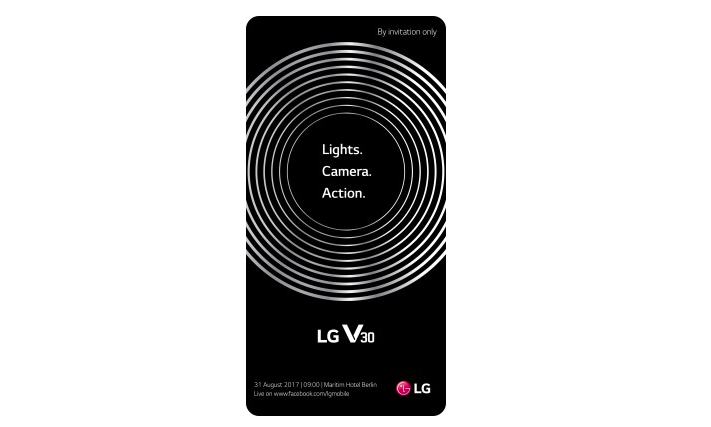 LG on Tuesday revealed the launch date for its much-talked-about LG V30 smartphone. The device is set to be unveiled on August 31, and the company has already sent out the media invites for the launch event. The image on the invite is all about phone's camera system, with a caption - "Lights. Camera. Action!" It also reveals that the event will be held in Berlin, Germany and it seems to be a pre-IFA 2017 event.

Leaked in a video

LG has partnered with Joseph Gordon-Levitt and his HitRecord organisation to promote its new products via innovative videos. However, the new video from the organisation has revealed the LG's yet to be released V30 smartphone, quite clearly. LG organises a competition in partnership with Gordon-Levitt, wherein the company encourages participants to shoot videos with LG's new products. One such video entry in the competition has provided us with clean shots of the LG V30.

First spotted by Droid Life, the videos are not high resolution, but they do reveal enough about the LG V30 smartphone. We can see the dual camera setup on the metal rear panel, a fingerprint sensor and "V" at the bottom. On the front, the phone can be seen featuring FullVision Display with thin bezels and rounded corners, which is similar to previous LG phones like the LG G6 and LG Q6. It's worth noting that the flagship looks pretty much like the leaked renders.

LG recently revealed that its next flagship would feature a 6-inch FullVision QHD+ P-OLED display. Also, according to the previous reports, LG V30 is expected to come with 18:9 aspect ratio like the LG G6 and LG says that it will cover 109 percent of the DCI-P3 colour space and support HDR 10. This time around, LG has ditched the secondary display on the V series. The phone has been tipped to come powered by a Snapdragon 835 SoC and 3200 mAh battery. Some reports also tipped that LG could offer the phone in different storage capacities - 32GB, 64GB, and 128GB.

We already know enough about the LG V30 by now, and there seems to be nothing new to look forward to except for the pricing of the device that will be revealed on August 31.