According to the information discovered in the Android Issue Tracker, LG could be the manufacturer for the next Pixel XL device. A bug entry from March in the Android Issue Tracker by an LG employee reads “USB PD Compliance Failure.” In reply to the entry, a Googler asks the LG employee to close the "previously discussed" bug and move under - Android > Partner > External > LGE > Taimen > Power

The steps mentioned by the Googler reveal that LG Electronics is indeed working on a new device codenamed "Taimen." The reply from the Google employee means that he wanted LG to move the bug entry and power report from the publicly visible Issue Tracker. Back in March, the Android Open Source Project unleashed two codenames “Walleye” and “Muskie” for Pixel and Pixel XL respectively. 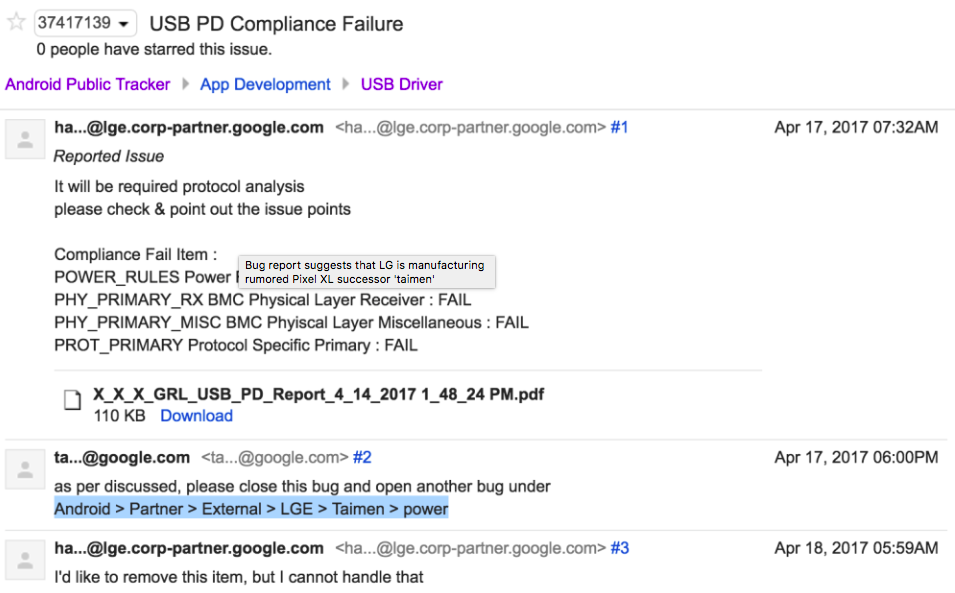 Later, a report from Droid-Life tipped that Google could also be working on a third device with a larger screen than Muskie. Today, Android Police reported that Google has stopped working on Muskie that was the previous codename for next Pixel XL device. The reason behind the cancellation of Muskie could be inefficient battery performance and other cost related issues.

HTC for the next Pixel device?

Regarding the development of "Walleye" - the codename for the next Pixel device, many reports suggest that Google might have roped in HTC for its development. Back in April, there was a rumour suggesting that Google is likely to invest in LG Electronics for flexible OLED displays on its upcoming devices.

Well, there is still no official information from Google regarding the reason behind shelving Muskie. Admittedly, Google's last year strategy of launching just two devices worked out really well as both Pixel and the Pixel XL received an impressive response from the buyers all over the world. It remains to be seen what the company has in store for this year.